High-speed rail will revolutionise Australia socially and economically, with the potential to transform the nation’s capital into a global tourist attraction, Japan’s ambassador to Australia says.

As the federal government pushes ahead with a plan to develop high-speed rail on the east coast after decades of debate and delay, ambassador Shingo Yamagami said Japan could offer important lessons from its much-admired Shinkansen, or bullet train, network. 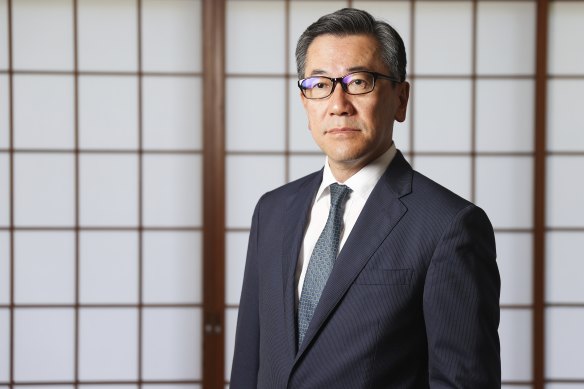 Japanese ambassador to Australia Shingo Yamagami says high-speed rail could be a “symbolic project of co-operation between Australia and Japan”.Credit:Alex Ellinghausen

“Once introduced, it will completely change both [the] economic and social landscape in Australia because that is what we experienced in Japan.”

Yamagami said high-speed rail could be a “symbolic project of co-operation between Australia and Japan”, complementing the increasingly close security relationship between the two nations.

Announcing Labor’s high-speed rail plan before the election, Prime Minister Anthony Albanese said: “My vision is for high-speed rail that runs from Brisbane to Melbourne.”

He said trains would run at speeds up to 350 kilometres per hour, meaning a journey from Melbourne to Sydney would take only around three hours.

The government passed legislation last month to establish a High-Speed Rail Authority tasked with identifying and securing rail corridors and overseeing the construction and operation of the network.

A high-speed train connection between Newcastle to Sydney will be the initial focus. The Commonwealth is co-funding a $1 billion project with the NSW government to upgrade rail infrastructure north of Sydney as a first step, with plans to eventually connect Brisbane to Melbourne with stops in Canberra, Sydney and regional centres.

Federal Infrastructure Minister Catherine King said a high-speed rail network along the east coast would be “a transformational project with the ability to touch the lives of all Australians, particularly in our regions”.

“High-speed rail in Australia has been an aspirational goal of many governments since the 1980s,” she said. “It is something the prime minister has long advocated for. Now, that vision is becoming a reality.

Yamagami said he did not agree with doubters who argue Australia does not have a large enough population to create sufficient demand for a high-speed rail network.

Yamagami said he had witnessed Albanese’s passion for high-speed rail in the Australian prime minister’s first meeting with his Japanese counterpart, Fumio Kishida, during a trip to Tokyo in May.

“He said he wants to learn from Japan’s experiences,” recalled Yamagami, who attended the meeting.

Albanese served as infrastructure and transport minister during the Rudd and Gillard years, commissioning a major report that recommended the development of a high-speed rail network along the east coast.

Fellow rail enthusiast Yamagami and his wife last month travelled on the Indian Pacific railway, which takes four days to cross from Sydney to Perth.

Yamagami said his hometown of Karuizawa, in the Nagano prefecture, demonstrated the dramatic impact high-speed rail could have on cities such as Canberra and Newcastle by drawing them closer to Sydney.

The introduction of the bullet train in the 1990s had slashed the travel time from Karuizawa to Tokyo from 3½ hours to one, changing it from a quiet resort town to a commuter hub.

“Once Canberra is connected to Sydney [by high-speed rail], Canberra’s status will change in the eyes of international beholders,” he said.

An estimated 150 million passengers travel each year on Japan’s bullet trains, which run at speeds of up to 320 kilometres an hour.

The bullet trains are renowned for their comfort, safety and punctuality, with most trains departing on time to the second.