It has to be one of the most dramatic entrances in opera. For half an hour, the story sets up the arrival of a mysterious knight in shining armour, said to be on his way to save the honour of a wrongly accused woman. Then, finally, as the musical swells as only a Wagner score can swell, he arrives: on the back of a boat drawn by a swan, no less. And wins the day. And gets the girl.

Jonas Kaufmann, who’s playing the title role in Opera Australia’s new production of Lohengrin, makes a rather more understated entrance at the stage door of the State Theatre. He’s been out shopping for clothes, attempting to come to terms with Melbourne’s fickle autumn climate, and was a bit put out when Hugo Boss was out of his favourite jumpers and the assistants suggested he try Uniqlo. 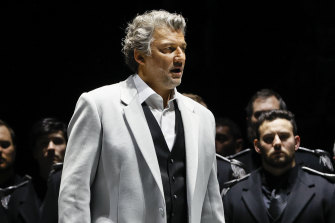 But he comes trailing clouds of glory nonetheless. Kaufmann, 52, is one of the world’s hottest tenors – if not the hottest – and not just in looks. Last year The New Yorker dubbed him “the most bankable male star in opera today”. He’s singing and performing across the world, at the greatest opera houses. He even put out a Christmas album with a jaunty version of Jingle Bells.

His name, like his glorious, effortless voice, fills concert halls. He’s the knight in shining armour for the accountants of companies struggling with pandemic malaise.

But he’s worried, nonetheless. He can’t be everywhere, and the pandemic has been an “existential crisis” for opera, he says.

In Europe, “even the biggest houses, the strongest, the Vienna State Opera, Munich State Opera, Berlin, you name it. They all struggle in selling tickets and they play productions in front of a half empty hall. And that cannot go on for a very long time.”

He’s profoundly grateful to be mostly insulated from it.

“I was in an exceptional position, first of all because I did make a hell of a lot of money in this business, much more than 99 per cent of the people in the business,” says Kaufmann. “And second, as soon as there was an opportunity, a possibility, they would always try to get the ‘dirty dozen’ from the top, to make it as loud as possible, when there was something going on. So I got plenty of business offers after four, five months into the pandemic.

“But it was a crisis moment, because when this all came to a halt, will the audience remember how important it used to be, for them to come back? And unfortunately part of this turned out to be true.”

Kaufmann wears his fame lightly: he’s a genial guy, and he cares deeply about the art that has been so good to him – but more importantly, about its audience.

“We have to do something,” he says. “In the past, the golden times before the pandemic, we didn’t pay attention to entertain people. It was more [about aiming] to be as outstanding, as extravagant, as on-the-edge as possible within this art form. And I said back then, and I say it now again, I think it’s necessary that there has to be an understanding that we do it for the people.

“It is necessary that you come up with a package where everyone feels pleased and entertained.”

So it’s an interesting choice to come to Australia for Lohengrin. Not only is the four-plus hours running time a challenge for audiences, but the production – created in 2018 by French director Olivier Py for La Monnaie in Brussels – is a complex layer of symbols and references that wrestle with the composer’s nationalistic and anti-Semitic obsessions.

Kaufmann says the key is not to “turn the story upside down” for the sake of it, but “to find as may layers as possible without destroying the surface”. And, of course, the music is “really, really gorgeous,” Kaufmann says.

He loves the soft moments, when his superhero suddenly becomes vulnerable. He loves the “gigantic introduction music”, the contrasts. A duet between Ortrud and Elsa “that just blows your mind, it’s so beautiful”.

He hopes, and trusts, that opera will weather the storm. It shouldn’t be an unaffordable luxury, he says, but as cheap as a movie ticket: “it is a live act, and anything can happen. It’s something incomparable.”

Lohengrin is at the State Theatre until May 24