Two years ago, the HBO documentary Mommy Dead and Dearest told the bizarre and tragic story of Gypsy Rose Blanchard and her mom Dee Dee. Next month, Hulu’s The Act will again tell the story of Gypsy Rose with Patricia Arquette and Joey King playing the mother/daughter duo. Here’s everything you need to know about Hulu’s The Act before it starts streaming on March 20.

The first season of the true crime anthology series will focus on Gypsy Rose, whose mom Dee Dee claimed her daughter was sick with mysterious illnesses that left the doctors scratching their heads. Gypsy Rose claims that Dee Dee suffered from Munchausen syndrome by proxy, a mental health problem in which someone makes up an illness or injury for the person in their care, according to Vulture. In 2015, Dee Dee was found stabbed to death, and Gypsy Rose pleaded guilty to murdering her mother. Gypsy Rose is currently serving a 10-year prison sentence in Missouri.

It’s clear that this is a not a cut and dry story — neither was the 2016 BuzzFeed article that likely inspired it — but Hulu describes The Act as a tale of "a girl trying to escape the toxic relationship she has with her overprotective mother." In the documentary Gypsy Rose has claimed that her mother held her hostage, forcing her to go through medical procedures and take medications to fool people into thinking she was really sick, according to Rolling Stone.

As seen in the doc, Mommy Dead and Dearest, Dee Dee often claimed her daughter had leukemia, muscular dystrophy, sleep apnea, asthma, epilepsy, hearing loss, and chromosomal defects that meant she had the mental capacity of a seven-year-old. None of which was true.

The first photos from The Act revealed that King shaved her head, which according to the HBO documentary was something Blanchard did to Gypsy Rose to make her seem ill. But King didn’t want to just look like Gypsy Rose. At the Television Critics Association panel on Monday (Feb. 11), King said she wanted to make sure that she told her story as honestly and accurately as possible, according to E! News. Unfortunately, beyond reading about the case and talking to journalist Michelle Dean, who wrote the BuzzFeed article and the series, there wasn’t much she could do to prepare for the role beforehand.

In some ways, she explained, it was the costume that helped her become Gypsy Rose. "Along with shaving my head, putting in the fake teeth, I wear several stages of fake teeth throughout the entire series, and being in the wheelchair. Being in Gypsy’s clothing, all of it," she continued. "The minute you get on set, everything that you’ve prepared for truly all falls into place right then and there." 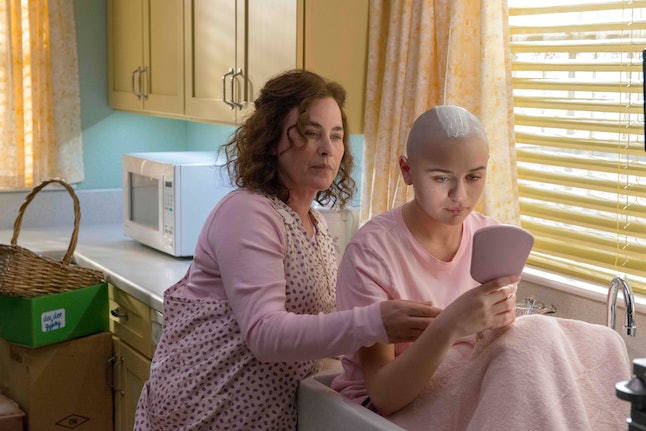 This is a story that is stranger than fiction, and that’s something King was very aware of from the beginning. "The story is so messed up and there are so many layers, and it’s so, so heavy," King told Teen Vogue last week. "I never want it to feel like we’re making fun of the story or we’re doing anything to romanticize it. It’s nitty-gritty; it’s really disturbing… And I’m really hyperaware of just trying to dive into Gypsy’s role as much as I can. I feel really proud of the work I’m doing."

King told Teen Vogue she hoped that if the real Gypsy Rose ever saw The Act she would "know that we wanted to do right by her." The real Gypsy Rose has yet to comment on the show, but when talking to ABC News from prison earlier this year, she did express remorse for what she had done to her mother. She also said that she felt more free in jail then she ever did living with her mom. And it certainly looks like King is doing everything in her power to make sure The Act reflects Gypsy Rose’s reality.