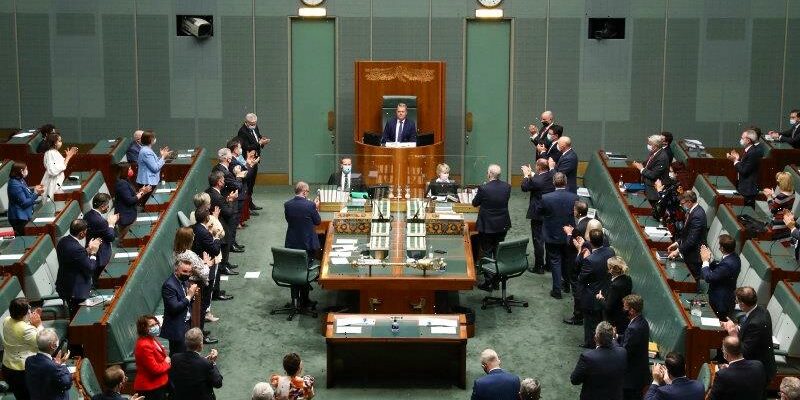 Scott Morrison goes into the May 21 election needing to win seats to maintain a Coalition majority in the House or else face negotiations with what could be one of the largest cross benches in Commonwealth history. 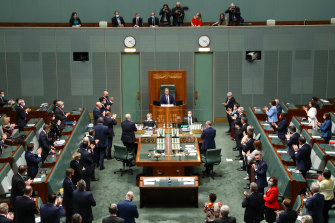 The House of Representatives will decide who forms the next government after the election.Credit:Dominic Lorrimer

As the government needs to appoint a Speaker to the House, it means whichever party hopes to take power in their own right after the election needs to claim at least 77 seats or else rely on cobbling together support from the cross bench.

Labor is expected to reclaim the seat of Spence, which has been open since the resignation of Nick Champion (who won a seat at the recent South Australian election). The Liberal Party expects to claim back Hughes from Mr Kelly.

In Queensland, the Coalition holds 23 of the state’s 30 seats with Labor holding just six after losing two members last election. Across in Western Australia, the Liberal Party holds 11 of that state’s 16 electorates.

But in Victoria, Labor won 21 of the state’s 38 seats (picking up three) while the Coalition holds 15. In the nation’s most populous state, NSW, Labor holds 24 seats compared to the Coalition’s 22.

Redistributions since the last election in Victoria and WA have also changed the electoral mathematics. The safe Liberal seat of Stirling in WA has been abolished with its member, Vince Connelly, now running against Labor MP for Cowan, Anne Aly.

In Victoria, a notionally safe Labor seat of Hawke has been created in the fast growing north-western Melbourne areas around Melton and Bacchus Marsh.

Once all these changes (including around Spence and Hughes) are taken into account, the Coalition on polling day will be defending 76 seats and Labor 69.

There are also several seats where incumbents are retiring. They include the Liberal Party’s John Alexander (Bennelong), Steve Irons (Swan) and Tony Smith (Casey) are all stepping down while in Queensland the LNP’s George Christensen (Dawson) and Ken O’Dowd (Flynn) are leaving.

Labor has similar issues in Spence and in Parramatta, where local party members have been upset by the decision to install former Kevin Rudd adviser Andrew Charlton in the electorate.

In the Senate, the Coalition goes into the election just short of a majority. It has 36 senators, Labor has 26 while the Greens hold 9. The crossbench includes two representatives for Pauline Hanson’s One Nation, Tasmania’s Jacqui Lambie, the Centre Alliance’s Stirling Griff and now independent Rex Patrick.

Of the 76 senators in the upper house, 40 are up for election. Thirty-six of them were elected at the double dissolution election of 2016 (while the four senators of the ACT and the Northern Territory face an election every time the House goes to the polls).

The Coalition goes into the election defending 19 senators while Labor has 15.

South Australia looms as a major battleground where former senator Nick Xenophon has announced plans to get re-stand. The state’s electoral landscape was already interesting with two senators with close ties to Xenophon, Rex Patrick and Stirling Griff, due for re-election at this year’s poll.

Another key Senate battleground will be Queensland where Pauline Hanson is up for re-election.

While she is expected to return, the impact of Clive Palmer’s United Australia Party (which gained more than 3 per cent of the vote at the 2019 election) will be a major issue. At the 2019 election, Labor’s primary vote collapsed to just 22.6 per cent (after between at 26.4 per cent in 2016).

Ordinarily, the Senate elections in the two territories attract little interest as the two positions are split between the major parties. But there is speculation in the ACT that the Liberal’s Zed Seselja is in a battle.

Former captain of the Wallabies (and a vice-captain of the Canberra Brumbies), David Pocock, is standing as a climate-focused independent.

He may pull votes from Canberra Liberal voters, upset with the party’s approach to climate change, as well as votes from the Greens (which grabbed 17 per cent of the territory vote at the 2019 election), Labor frontbencher and former territory chief minister Katy Gallagher and independent supporters.

His battle will be to drag down Senator Seselja’s vote by such a margin that he stays alive along enough through the vote to pick up preferences from Labor, the Greens and other independents.