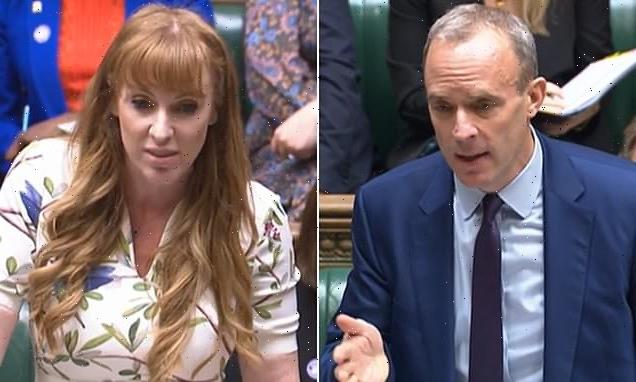 Raab needn’t have worried… Angela Rayner put in a performance about as weak and tepid as a theatre bar gin and tonic: HENRY DEEDES watches Dominic Raab at PMQs

Dominic Raab’s cranium was glowing so brightly it could have helped solve the heating crisis. It tends to do this during moments high anxiety. That dreadful night Boris was rushed into intensive care during the pandemic I remember the veins in poor Dom’s forehead were in danger of going pop.

With Rishi Sunak 50,000 feet somewhere over the Indian Ocean, the Deputy Prime Minister was standing in at PMQS. But that wasn’t what was causing him so much frantic eyebrow twitching and buttock-shifting.

Of far more concern was that his opponents were bound to make hay over the independent enquiry he’d been forced to request that morning after it emerged he was the subject of two bullying complaints. You will have noticed feelings on Whitehall these days have a habit of bruising rather easily.

Turned out for all his nervous fidgeting before the off, Raab needn’t have worried. His opponent was Angela Rayner who managed to put in a performance about as weak and tepid as a theatre bar gin and tonic.

Strange because Ange is normally such a formidable customer at the dispatch box. Coarse and devoid of wit, absolutely. But formidable all the same. Coming up against her usually like going on the tube in full evening regalia and encountering a carriage of boozed-up football hooligans. You know you’re going to get roundly abused but only a fool would bother trying to answer back. 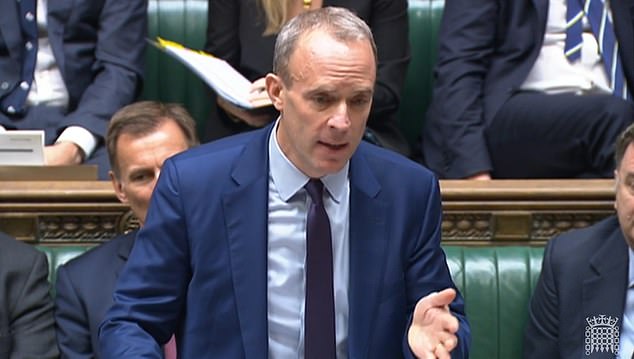 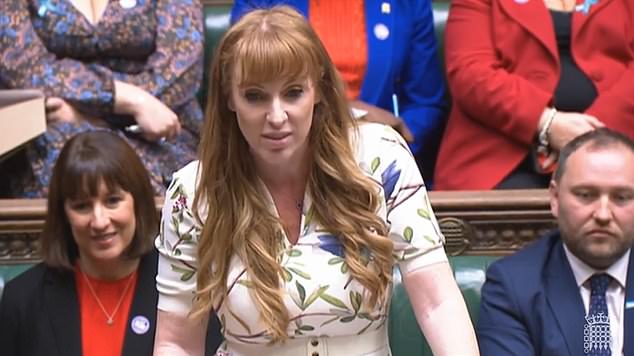 Today though she was oddly toothless. Boudicca deprived of her spear. Nora Batty sans rolling pin.

Admittedly, Labour’s deputy leader did not have much of a canvas to work with. So far, the only on-the-record allegation made against Raab comes from ex-Foreign Office mandarin Sir Simon McDonald who’s been busy telling anyone who’ll listen that Raab could be ‘very curt with people’ who worked at the FO. Sir Simon, by the way, is currently touring the broadcasting studios touting his memoirs, presumably available now in all good book shops.

Far worse for Rayner was that she managed to get herself into such an almighty muddle. She’d spent all week demanding an investigation into Raab’s behaviour. Now Raab himself had requested one she was no longer interested in waiting for the outcome, declaring him guilty as charged. She demanded Raab apologise. At one point she even insisted he resign. ‘What’s he still doing here?’ she asked.

Mr Raab is admittedly not a sympathetic character. It’s entirely possible there are snarling Staffordshire bull terriers currently chewing their way through the cages at Battersea Dogs Home one would sooner pick up and cuddle. But watching him having to sit and listen this tirade of twaddle being thrown in his direction made one almost feel sorry for him.

He demanded Rayner put a specific point to him rather than resorting to her usual ‘bluster and mudslinging.’ Rayner responded by bringing up the case of the ‘flying tomatoes’ where the Deputy PM was said to have angrily thrown a couple of cherry tomatoes at a paper bag in a fit of pique. Raab insisted the story was balderdash. Even if it was true, so what? Old Labour hands might wish to take Angela aside and politely warn her Gordon Brown was said to be prone to throwing considerably more lethal objects. And not necessarily at a bag. 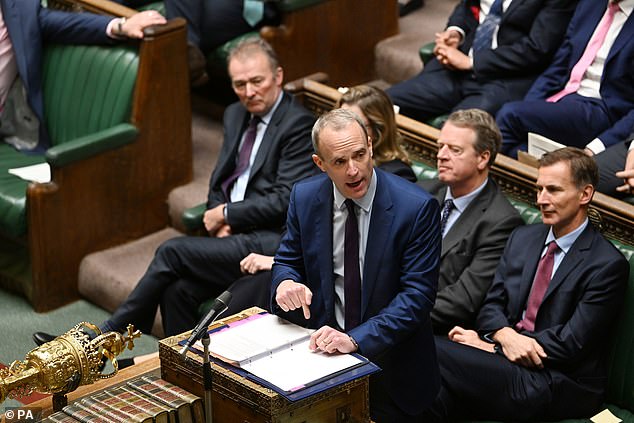 Mr Raab is admittedly not a sympathetic character. It’s entirely possible there are snarling Staffordshire bull terriers currently chewing their way through the cages at Battersea Dogs Home one would sooner pick up and cuddle

By the time Rayner sat down, Raab’s vital signs had returned to normal. The pulse rate was steady. Breathing rates under control. Armpits too were possibly less damp than they had been ten minutes previously.

For the rest of the session, his Conservative colleagues rallied around him. Jacob Rees Mogg (Con, NE Somerset) reminded the House of the litany of bullying offences committed by Labour MPs in recent years. He accused them of being hypercritical, and ‘perhaps a stronger word that is not necessarily parliamentary.’ Lee ‘now then’ Anderson (Con, Ashfield) said Labour were the ‘bully boys’ for continually trying to hound Home Secretary Suella Braverman out of her job.

Meanwhile, Simon Hoare (Con, N Dorset) warned Rayner of the old British tradition of people being ‘innocent until proven guilty.’ Quite so. Perhaps that great stickler for natural justice Sir Keir Starmer could explain it for her.