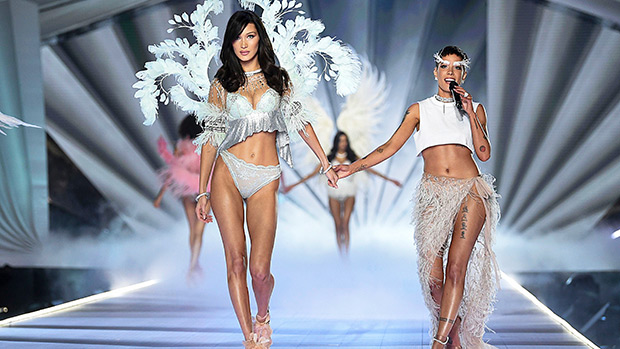 The VS Fashion Show wasn’t ALL about the models — there were some pretty epic performers, too! This year, that included Halsey, who absolutely killed it with her performance of ‘Without Me’ on the catwalk.

Halsey’s new song, “Without Me,” has quickly been climbing the charts, and she brought it to the Victoria’s Secret Fashion Show 2018, which aired on Dec. 2. Halsey belted out the track during the third segment of the show, which was themed “Flights of Fancy.” Veteran VS model, Martha Hunt, opened the section, while stars like Bella Hadid, Devon Windsor, Willie Harlow and more also walked while Halsey performed. This segment also featured the $1,000,000 Fantasy Bra, which was worn by Elsa Hosk this year.

For the performance, Halsey wore a revealing feathered skirt, which was tied at the waist and had a slit all the way up the singer’s thigh. She paired it with a simple white crop top, putting her abs and toned legs on display. At one point during her set, Halsey held hands with Bella and they strutted side-by-side down the runway. Halsey totally looked like one of the models as she showed off her amazing figure in this ensemble! The show also featured performances from Kelsea Ballerini, Shawn Mendes, Rita Ora, Bebe Rexha and more.

The VS Show taped in New York City last month, and afterward, Halsey took to social media to dish on her secrets for looking so good during her performance. “I definitely did a lot of sit ups” she admitted on SiriusXM. “I had a head start, though. I don’t know if you saw my Halloween costume, but I had to get ahead of the game!”

Halsey released her last album, Hopeless Fountain Kingdom, in June 2017, so fans are anxiously waiting for the next record. So far, she hasn’t revealed any plans for another album, but “Without Me” is definitely the perfect kick off to whatever’s coming next!