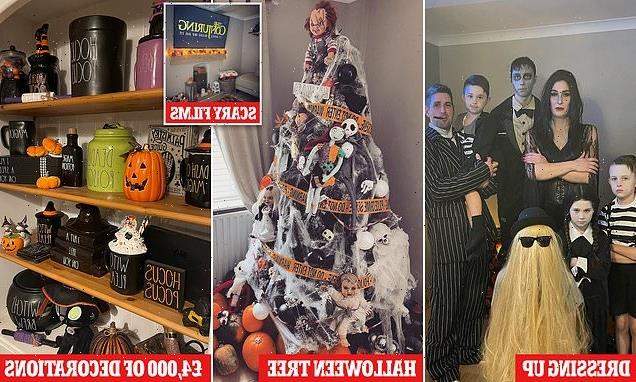 Meet the real Addams Family! Halloween-mad mother-of-five reveals she has spent £4,000 on spooky decorations for her home – and says she celebrates for FOUR MONTHS

A Halloween-loving mother-of-five has turned her brood into the real-life Addams Family, converting her Surrey home into a house of horrors for four months every year.

From July to October Sarah Adams – that’s her real surname – a 36-year-old stay-at-home mother from Banstead in Surrey, lets loose her ‘inner child’ and decorates her house with horror dolls, cobwebs and pumpkins for Halloween.

During the family’s favourite time of year, spooky movies run non-stop on their TV, surrounded by over £4000 worth of decorations.

Sarah, her partner Sam Cullip, 37, a plasterer, and her five kids who share her Adams surname – Alfie, 17, Jamie, 14, Kobie, 10, Bonnie, 7, Archie, 5 – love dressing up as the Addams Family and look strikingly similar to the macabre TV clan.

After the Halloween decor is cleared, the family create a spooky Christmas, complete with Chucky – the serial killer doll from the Child’s Play slasher film franchise – who has a cute festive hat and candy cane. 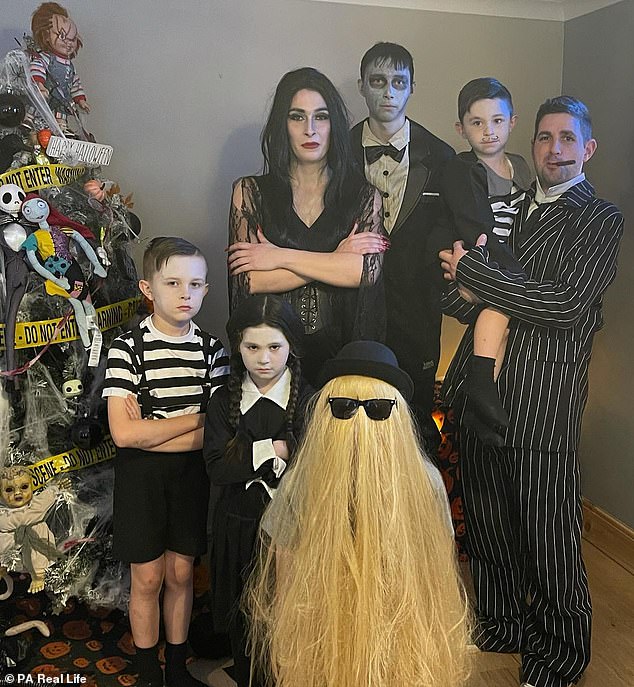 Sarah Adams, from Surrey, (centre) loves dressing up the entire clan so they look like the famous fictional family, including her partner Sam Cullip (right) and her children (pictured) 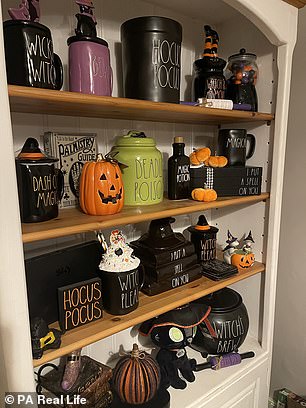 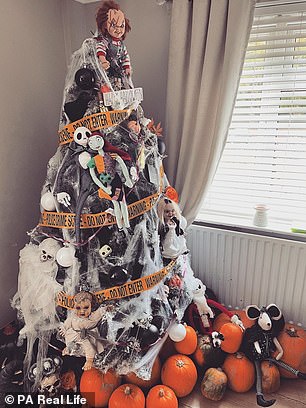 The family makes the most of the spooky holiday by decking out the house with £4,000-worth of decorations for four months of the year 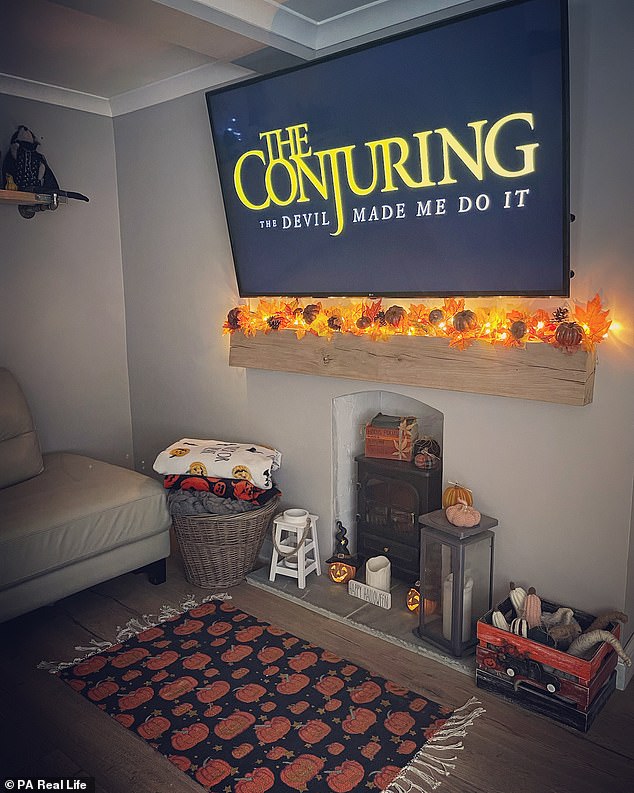 Explaining that she missed out on Halloween when she was younger, Sarah said: ‘Halloween was never really celebrated at home or generally in the 90s. So when I had children, it was my inner child coming out.

‘I’m making my inner child very happy with all the decorations. I also see myself as a cool mother – maybe a bizarre mother, too – that has the Christmas tree up already and puts Halloween decorations on it.’

Sarah’s love for Halloween and all things horror was born when she saw Chucky on screen for the first time aged five but growing up, she felt she was missing out on the fun.

‘I would love to tell my teenage or child self that everything will be fine and that you deserve to have celebrations like Halloween eventually,’ she remembered.

In 2011, when she was 27 and her older sons were 6 and 3, she began collecting horror-themed decorations to decorate the hallway and picking out trick or treating outfit with the kids. 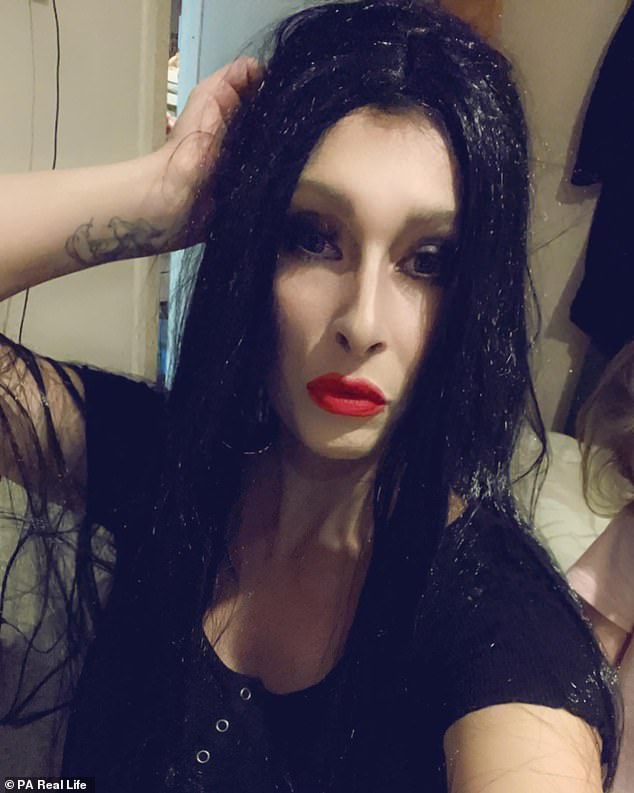 According to Sarah (pictured), she never celebrated Halloween as a child growing up in the 90s, so now she lets out her inner child and goes all out making the most of the holiday

Now Sarah’s Halloweens have become so big some of her 12,000 social media followers ask her each June if she has her spooky decorations up yet.

In fact they start ‘edging their way out’ from cupboards and from under her ottoman bed in early July.

Meanwhile, her nine spooky dolls are permanently and prominently displayed on a shelf above the stairs – and her favourite is Chucky.

Sarah said: ‘He was the first decoration I bought in 2008 and then I officially started collecting Halloween and horror things in 2011.

‘I obviously love horror and I couldn’t believe when I saw the Chucky doll in a Modelzone shop in Crawley. 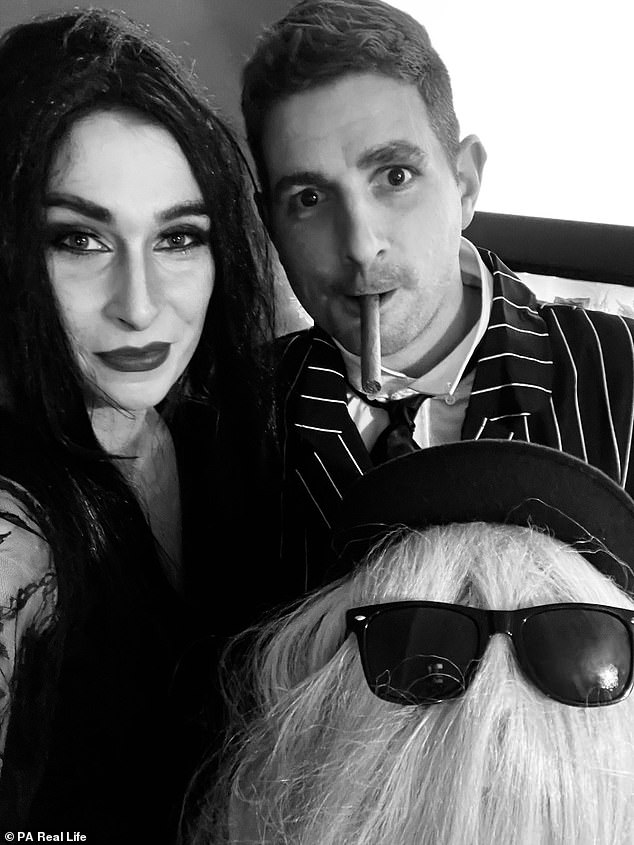 Sarah, pictured here with her partner Sam, explained that she started collected Halloween-related items more than 10-years-ago, in 2011 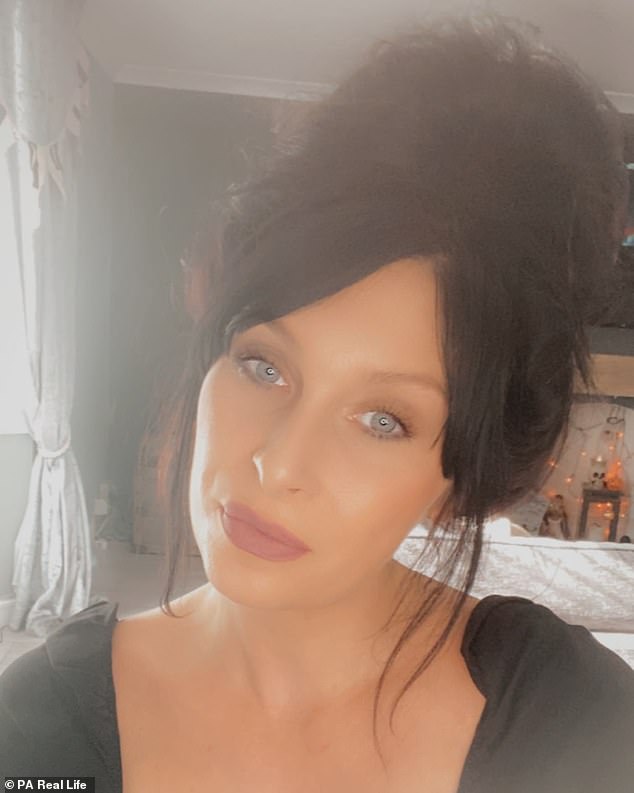 ‘You see these things in America, but never here – so I obviously had to buy him. He was £50. A couple of years later, Tiffany, Chucky’s bride, was released and I needed to get her as well. From there, this obsession started.’

The creepy doll also had sentimental value for the mum, as it was the first horror film she ever saw.

She said: ‘It didn’t scare me. It’s a brilliant story and I just love Chucky.’

The horror family all dressed up as the Addams Family last Halloween, and she said: ‘It was the first family costume we did. Normally we just all dress in costumes we pick out ourselves and it was fantastic.’

But Sarah, would like to make some improvements next time around.

‘I said to everyone that we have to retake the picture of us as the Addams Family, because I couldn’t find a hand to save my life. 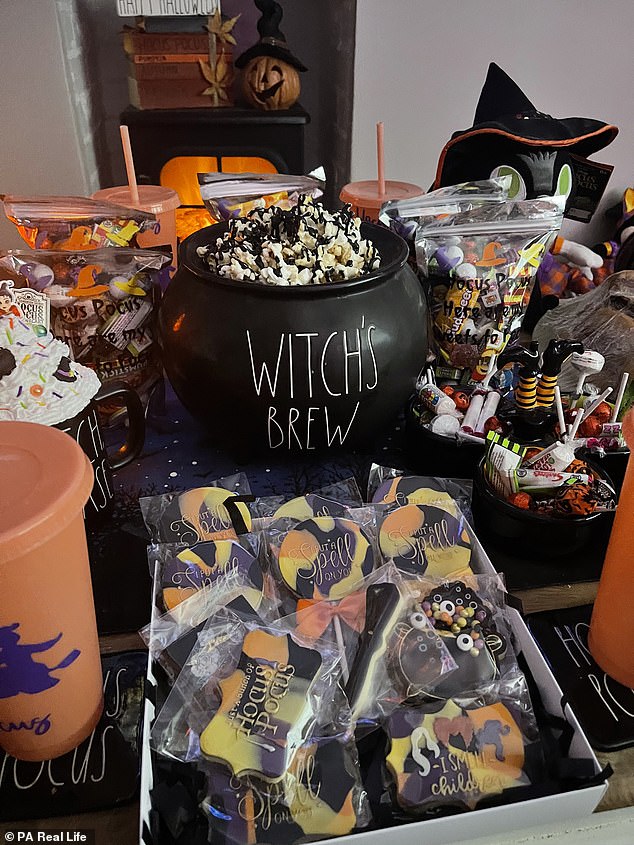 Sarah shows off her creative talents, curating seasonal treats and decorations, which she photographs and shares on Instagram 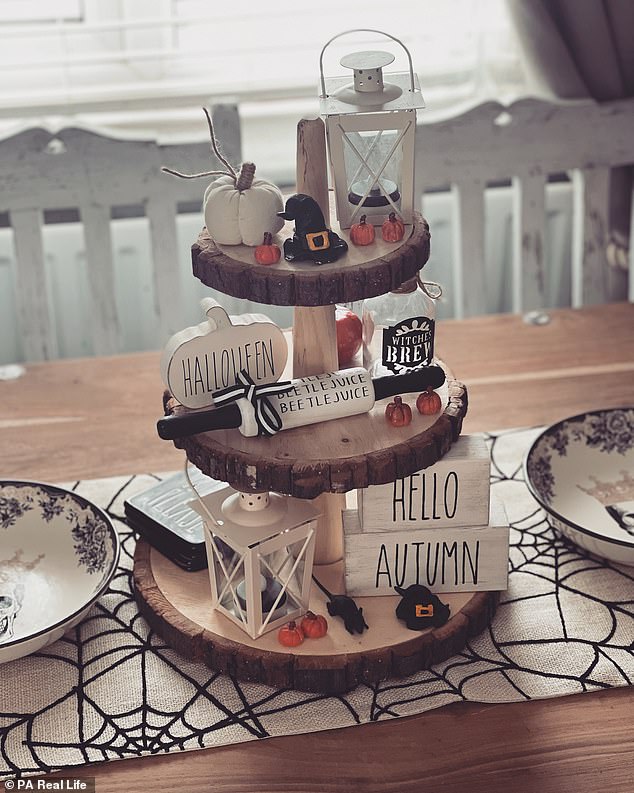 ‘It want Thing – that’s what the hand’s called – sitting on one of our shoulders. It’s really bugging me that I couldn’t find one, it seems incomplete, so we want to retake the picture outside with gravestones, fog and pumpkins next year.’

The Addams and Adams families don’t just have their last name in common – Sarah reckons her personality is similar to Morticia Addams, her daughter Bonnie resembles Wednesday Addams and her partner Sam has lots in common with Gomez Addams.

She said: ‘I’m a very black and white as a person. I don’t show that many emotions, like Morticia, but at home I adore my kids over everything – they are my whole life.

‘Sam is more romantic than me, he is like Mr Addams in that sense. And my daughter Bonnie, she’s Wednesday 100 percent because of the way she looks.’ 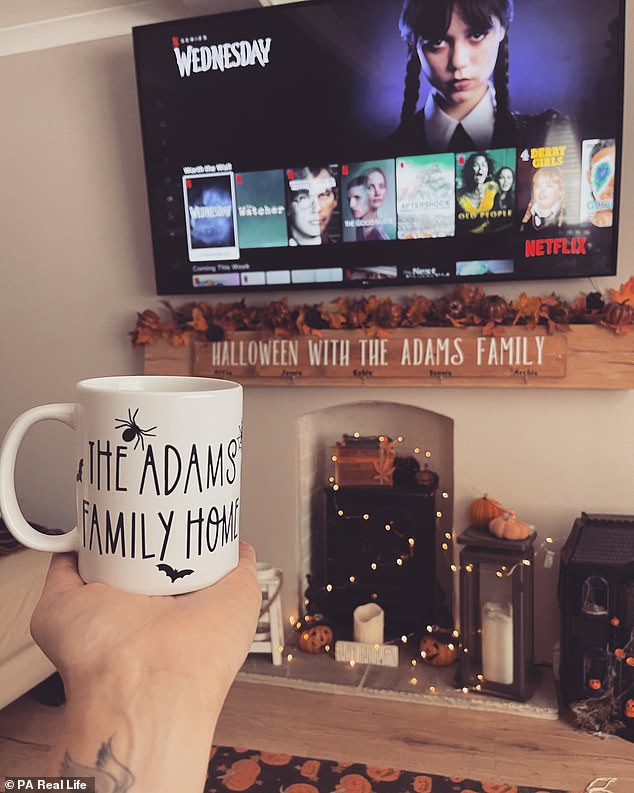 Details: it’s not just the bigger touches that have a Halloween vibe, smaller and more thoughtful touches like mugs (pictured) are given the spooky treatment 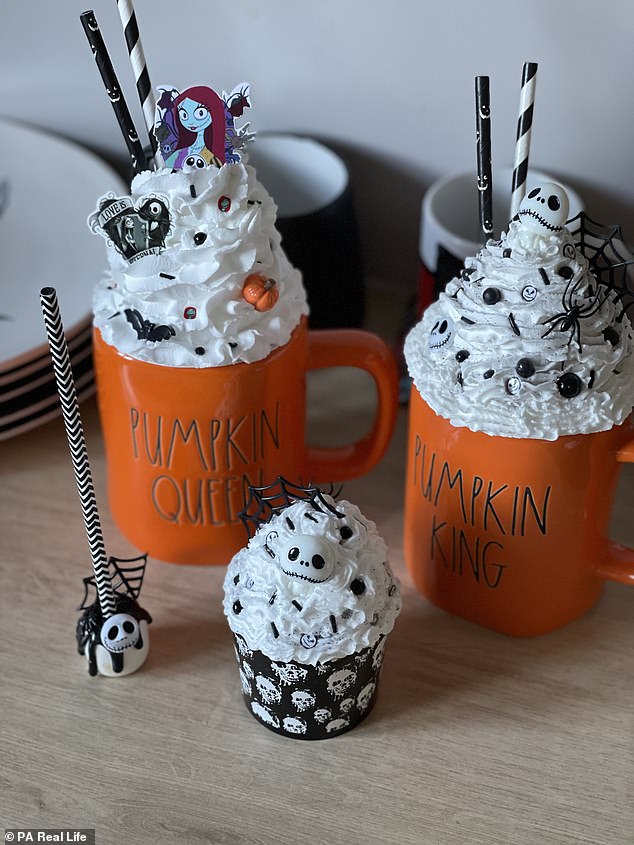 As well as watching movies and putting up the Halloween tree, the family enjoys treats, like these decadent spooktacular drinks

In the lead up to Halloween, the Adams family has their favourite Halloween movies running in the background, like A Nightmare Before Christmas, Chucky, Annabelle and obviously The Addams Family.

Making Halloween-themed cookies, playing Cluedo, picking and carving pumpkins as well as a stockings filled with a horror-themed figurines, sweets and chocolate on Halloween morning are also on their programme.

Sarah said: ‘When the second Hocus Pocus movie was released, I also threw a party for my kids with handmade cookies and other things I bought at small businesses, like their own Hocus Pocus themed cup.

‘I also had biscuits in the shape of cinema tickets they could eat. They loved it – even my 17-year-old, Alfie, said it was nice.’

Sarah isn’t the only one in the Adams family who likes all things horror. 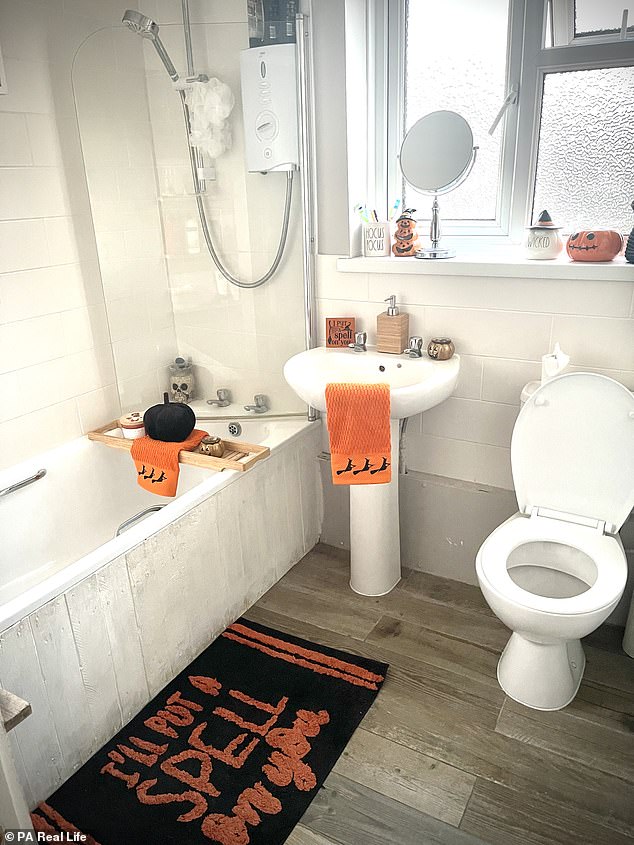 Even the bathroom gets in on the action, with special touches like these orange Halloween towels bring a touch of the macabre to the room

While Alfie recently got a glow-in-the-dark Purge mark, Bonnie likes to brush Tiffany’s hair and her youngest, Archie, even took Chucky to bed as a cuddly toy.

She said: ‘My kids are not fazed by the decorations. The Chucky doll is on top of the stairs all year, as is the Scream Mask.

‘When we watch scary movies, I always tell them it’s not real and none of the decorations will come to life; I think that helps.

‘But I think they’re just fearless with things like this and are not the kind of kids that wake up screaming with nightmares.’

Making her house spookier doesn’t stop there. The next project involves turning her stairs into an all-year horror display.

She said: ‘My partner is making me coffin-shaped shelves – I will have horror stairs, but currently this is still just in my head.’ 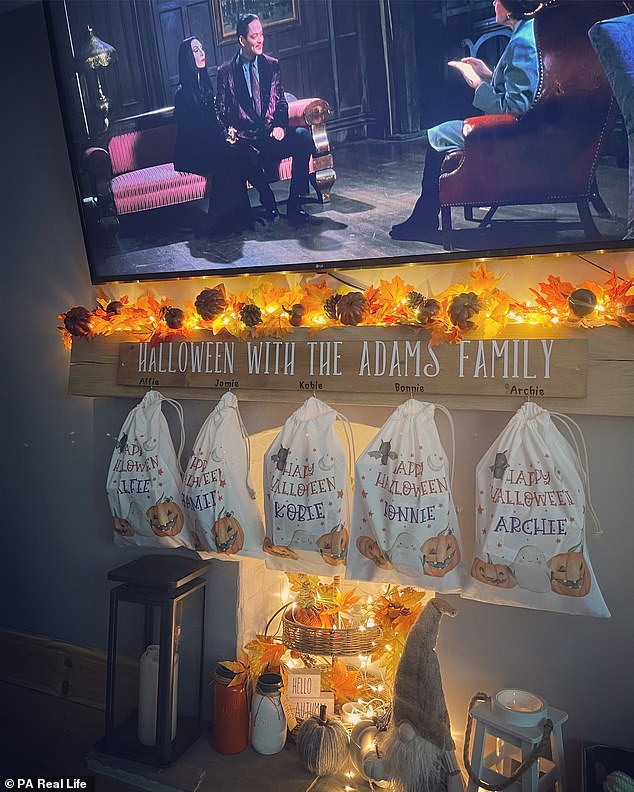 Just like Christmas, but with a twist, the children enjoy these stocking-style treat bags, decked out with pumpkins and ghosts 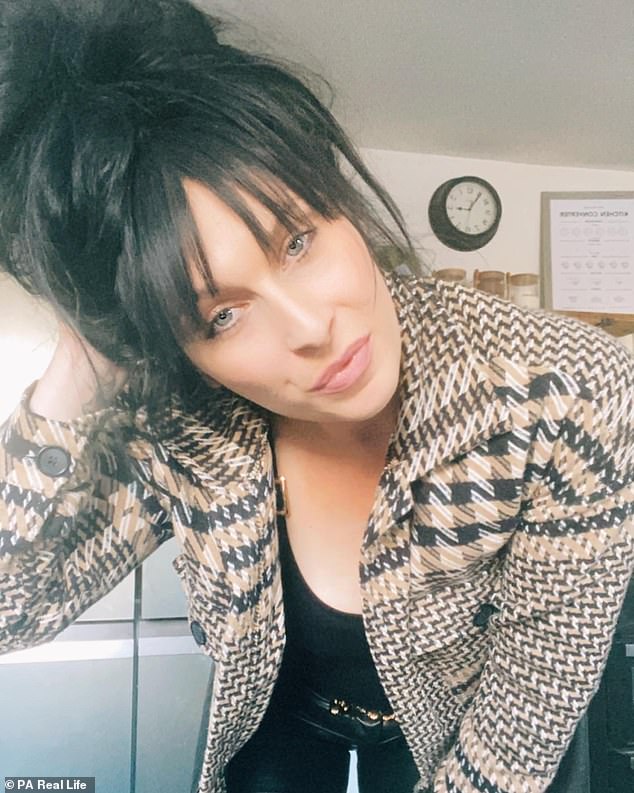 According to Sarah, as well as having a passion for Halloween, she ‘loves décor and making everything look pretty’

Her partner of 10 years, Sam, has known Sarah for over 15 years, and supports her passion for horror and Halloween.

She said: ‘He came home the other day after driving around for hours trying to find a Sally from Nightmare Before Christmas for me.

‘He pretended he had to go for a job, when he was really driving around getting this surprise for me.’

Sarah now has hundreds of pieces in her spooky collection that she estimates is worth about £4000, with most coming from America through her friends or bought in the UK at TK Maxx, Asda or Sainsbury’s.

She said: ‘I love Rae Dunn decorations, because they’ve got nice writing on them. I probably own £1000 worth just of those.’

And should the space in her three-bedroom house run out, she confesses she’d rather move than get rid of any of her eerie decorations.

‘I just love décor and making everything look pretty. I got hooked on it and no one can ever change my mind from it.’