Michael Myers is back, for the 11th time if you’re counting. But this latest resurrection in the “Halloween” film franchise has a lot going for it. For starters, critics actually seem to like this one.

Maybe that’s because it’s actually about something – not the killer, but the trauma Jamie Lee Curtis’ character has been through since we first saw her fending off Myers’ deadly invasion 40 years ago.

But here’s the thing about Curtis and her life-long connection with death: “You know, I don’t like to be scared,” she told correspondent Lee Cowan. “I really don’t! There is no amount of money you could pay me to go to a scary movie!” 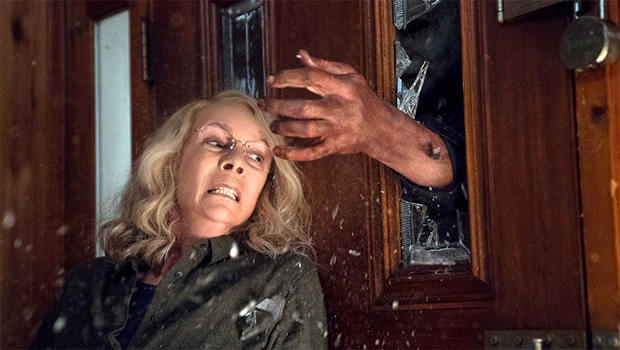 Watch out! Jamie Lee Curtis meets an unwanted visitor in “Halloween,” a sequel to the 1978 horror film in which Curtis first crossed paths with the murderous Michael Myers.

But these days, audiences are dying to pay to get their fear fix. This year’s sequel to the original “Halloween” had a monster opening, scaring up a staggering $77.5 million.

Last year, Stephen King’s “It” earned more than $700 million worldwide. That’s almost super-hero kind of money, says Vulture film critic Jordan Crucchiola. “It was the most profitable year in the genre in at least a quarter of a century,” Crucchiola said.

She says that what Alfred Hitchcock’s “Psycho” and other good horror movies since have done is change us physically, even for a moment. “It is the only genre where, when you watch it, you are actually transported into what the character is feeling on screen to a literal degree,” said Crucchiola. “And the idea of being able to empathically tap into people that way is a really cool thing!”

Margee Kerr is a sociologist who studies what happens to our brains when things go bump in the night, whether it’s in a movie theater or in a haunted house; she’s the author of “Scream: Chilling Adventures in the Science of Fear” (PublicAffairs). 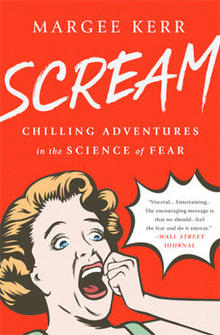 Turns out that spine-tingling feeling we get is actually sort of a high. “Our heart rate increases, we’re breathing faster, we’ve got the adrenaline,” Kerr told Cowan. “We’re not really thinking about our bills or the future; you’re in that moment.”

Cowan asked, “That sense of self-confidence, if you go into a horror movie and you make it all the way to the end?”

“Yeah, yeah. we did find that people do feel like they learned about themselves and they challenged their fears. That that is inherently rewarding.”

So much so, she says, that we happily keep going back for more. “We’ve been employing people to help us be scared for centuries,” Kerr said.

“Because we want it, we want to be scared?”

“Yeah, we want to be scared, and we like to pay people to do it for us!” she laughed.

“Fear can absolutely be a good thing,” Kerr replied. 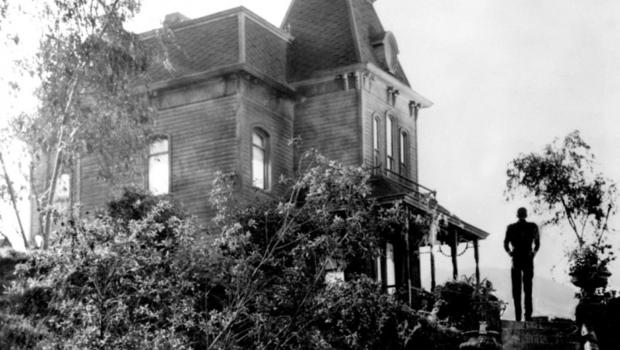 Check our guide to the most unforgettable cinematic shockers

That said, horror movies haven’t gotten much respect over the years, at least in the eyes of the Academy of Motion Pictures Arts & Sciences. Only a handful have ever been nominated for Best Picture, which is what made last year’s “Get Out” such a standout.

The racially-charged thriller was not only nominated for Best Picture, but for three other Oscars as well, and won Jordan Peele an Academy Award for Best Original Screenplay. 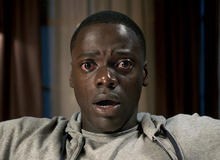 Daniel Kaluuya in “Get Out.”

And the best part: it was made for just $4.5 million, and earned well over $250 million

It was the product of Blumhouse Productions, headed by Jason Blum, who is also behind the current “Halloween.” “One of my favorite things about horror is you can really tuck a social message into a horror movie,” he said. “We don’t do it to all our movies, but they’re more fun when we do.”

He’s pretty much Mr. Horror these days, so much so that as a part of Universal Studios’ Halloween Horror Nights, there’s a haunted attraction dedicated just to his films.

“I feel clearly, very very at home here. These are really my people,” Blum said leading Cowan through the haunted house maze. 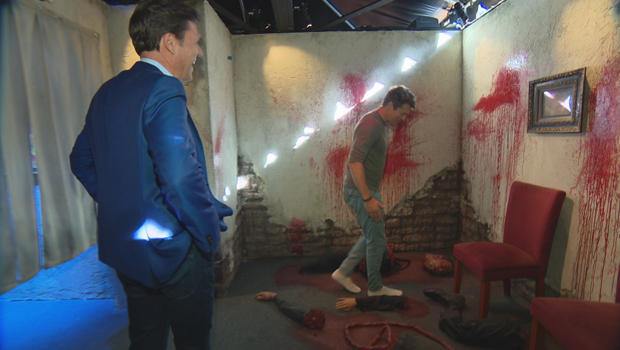 His business model has proven to be scarily good – cheap movies don’t have to mean cheap thrills, he says. They can actually be quality movies.

Cowan asked, “Is there a cap that your sort of looking for in terms of production costs?”

“So, if someone pitches you a movie that going to cost more than $5 million to make?”

“Not interested. Don’t want to hear it. There’s so much garbage that comes along with an expensive movie. It’s not fun.”

Remember “Paranormal Activity”? That’s his, too. Made for $15,000, it has grossed $200 million worldwide. “It’s still to this day the record-holder for the most profitable movie as measured by the percentage of budget to worldwide gross,” Blum said.

The bad news for Jamie Lee Curtis is that horror movies are here to stay.  The good news, though, is that, despite her fear of fear, she says her storied place in the genre that makes her squirm has been worth every single goose bump.

“I’ve jokingly said it – when I die, which is gonna happen, because we’re all going to die, it will say ‘”Halloween” actress dies.’ Period. That is my fame, it is my fortune, and it is my epitaph.”