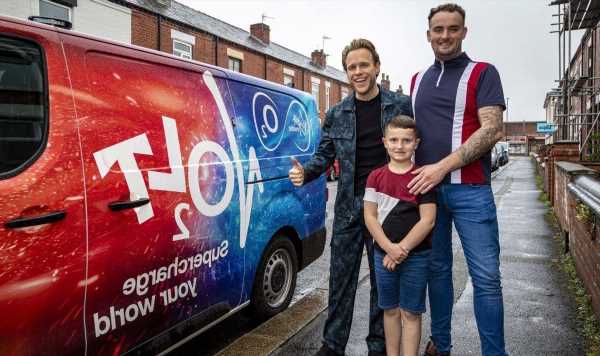 On a typical day, those polled have a host of “must finish” tasks to do, including cooking dinner, tidying the house, and helping the kids with their homework.

And as a result of having of having so much on, 53 percent claim they have become expert multi-taskers – out of necessity.

The research by Virgin Media O2, which is celebrating reaching more than one million Volt customers, found 48 percent also rely on modern tech, like fast broadband, to get jobs done on time.

To mark the occasion, the telecommunications company has teamed up with Olly Murs to present a lucky Volt customer with a haul of high-tech gadgets – and tickets to the singer’s tour.

The study also found 80 percent are routinely forced to carry over tasks to subsequent days.

And 89 percent have been left with no choice but to stay up later than they want to – just to get as much of their to-do list scratched off as possible.

So perhaps it’s no surprise that a whopping 83 percent of those polled have areas of their lives they wish they could speed-up.

Being stuck in traffic, and waiting in queues at the supermarket, are among the top instances they’d most like to get out the way sooner.

And other examples of things which drag on too much for those polled include waiting for deliveries, hanging around for delayed public transport, and adverts.

Inevitably having so much to finish means any free time they might have tends to take a hit – even on those seemingly rare occasions when they finally have time for themselves.

And 42 percent admit they’ll get so overwhelmed by all the tasks they need to do, they end up doing nothing at all.

Almost half (45 percent) said they’re so busy with everyday responsibilities, such as work, childcare, or household duties, that they often have no energy to do anything worthwhile in their free time.

The study, carried out through OnePoll, found 48 percent believe modern conveniences such as superfast broadband help save them time.

And one in three (34 percent) wish they had faster internet, because they’re of the opinion it would effectively give them back time.

Jeff Dodds, chief operating officer at Virgin Media O2, said: “As the research shows, with so much to do and not enough time, having an extra boost to broadband speeds and mobile data can make a huge difference in helping save time on everyday tasks.”