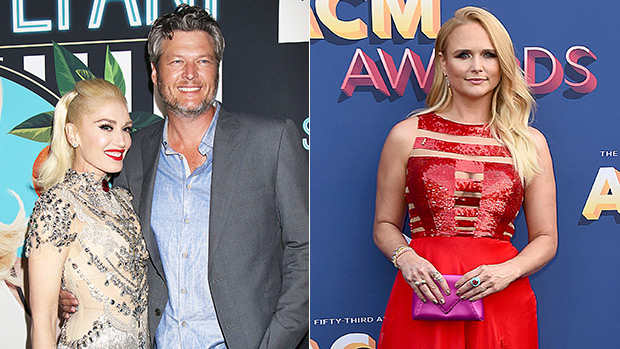 Gwen Stefani is hoping she’ll never have to feel the sting of missing Blake Shelton like Miranda Lambert has, HL has EXCLUSIVELY learned! Here’s why Gwen can understand his ex-wife’s ‘regret.’

Gwen Stefani, 49, doesn’t want to put herself in Miranda Lambert’s shoes. It’s been three years since the “Tin Man” singer and Blake Shelton, 42, divorced, and Gwen’s hoping Blake won’t repeat history! “Gwen knows Blake’s a one in a million kind of guy. He’s not a guy that’s easy to get over, so it makes total sense to her that Miranda would feel pangs of regret and jealousy,” a friend of Gwen’s EXCLUSIVELY tells HollywoodLife. As we’ve told you, seeing Gwen and Blake “look so good, happy and in love” at the E! People’s Choice Awards on Nov. 12 made Miranda “emotional,” as another source told us. Their “love” was hard to miss, as Gwen congratulated her beau with a big smooch on stage after he accepted the award for Country Star of the Year. It was televised for all to see, and you can see a screengrab of the flirty moment below.

Yes, Miranda celebrated post-divorce life on her and Pistol Annies’ new track, “Got My Name Changed Back.” And of course, she doesn’t want to rekindle a romance with her ex-husband of four years, whom she originally wed in 2011. But it’s natural for any ex to get wistful here and there while thinking about a former flame, and in Miranda’s case, “especially because Blake has totally moved on and has a whole new life,” our source explains! Just four months after his and Miranda’s divorce was announced in 2015, we were hit with another shocking announcement: Blake and Gwen, who had been judging alongside one another on The Voice, were officially dating! The two have remained together in the three years since the November 2015 announcement, and Gwen would like to add even more years to that timeline.

“Gwen can only imagine how hard it would be to get over Blake and she truly hopes she never has to find out,” our source goes on. “Gwen hopes that she will be with Blake until her last breath. She knows she would feel a severe loss and a massive hole in her life without Blake so she definitely can understand why Miranda would be feeling the loss. Gwen counts her lucky stars all the time that Blake is her man.” The former lead singer of No Doubt has shown her Instagram followers how lucky she feels, which you can see in our gallery above!

And it appears that the PCAs wasn’t the only event that gave Miranda a dose of nostalgia! She was already remembering what it was like to be a wife in her band’s other new track, “When I Was His Wife.” It’s safe to presume that Blake could’ve been the partial inspiration for the “his” in that song title. After all, the “I Lived It” singer is Miranda’s only ex-husband. “When you’re blinded by diamonds and driven by looks, Hon’ you can’t build a mansion with a piece of sawdust, Holy matrimony, best day of your life, I said that too when I was his wife,” she sang.  Sounds like bittersweet memories to us!