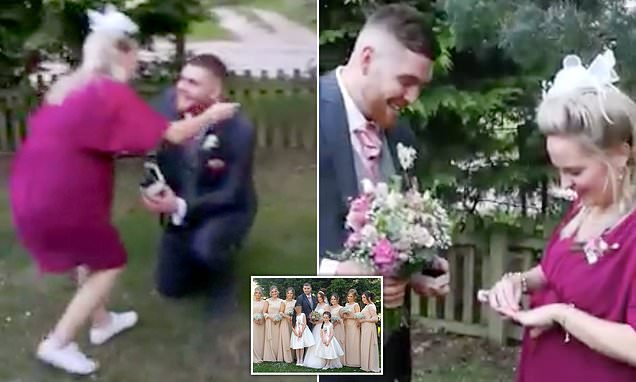 A bride whose brother proposed to his girlfriend at her wedding has insisted she had no problem with her thunder being stolen, and even spent months helping to plan the big moment.

Kieran Roberts, 24, got down on bended knee to ask partner of two years Nikki Tabberer to marry him, after his sister Jessica wed fiancé Dan Hughes earlier this month.

Emotional footage shows Jessica, 26, from Birmingham, West Midlands, about to throw her bouquet before turning and handing it to Nikki, 30.

She then guided her future sister-in-law to Kieran, who got down on one knee and held out a ring.

Unfazed by the limelight being stolen on her big day, Jessica actually suggested her brother pop the question at her wedding and even helped plan the whole thing. 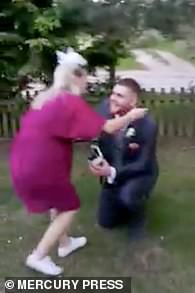 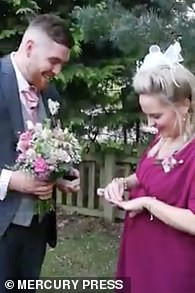 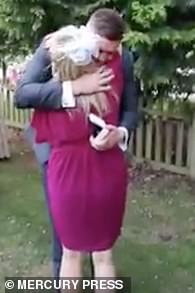 Kieran Roberts, 24, proposed to his girlfriend Nikki during his sister Jessica’s wedding earlier this month 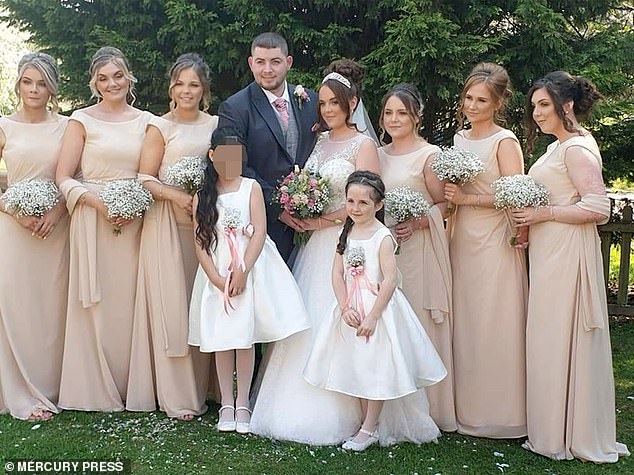 Pictured: Jessica, 26, with her bridesmaids, flower girls and her husband Dan on her wedding day. Jess was in on the proposal

Jessica said: ‘As a family we’re really close, so it was lovely how that could be part of the wedding.

‘Weddings are meant to be about family. Some people have said it’s a bride’s day and they would go mad if it happened to them, but I didn’t feel like that at all.

‘I was like “no it’s my day and I decide what happens”.

‘It was so cute and was a great way to end the day, as we had two things to celebrate. 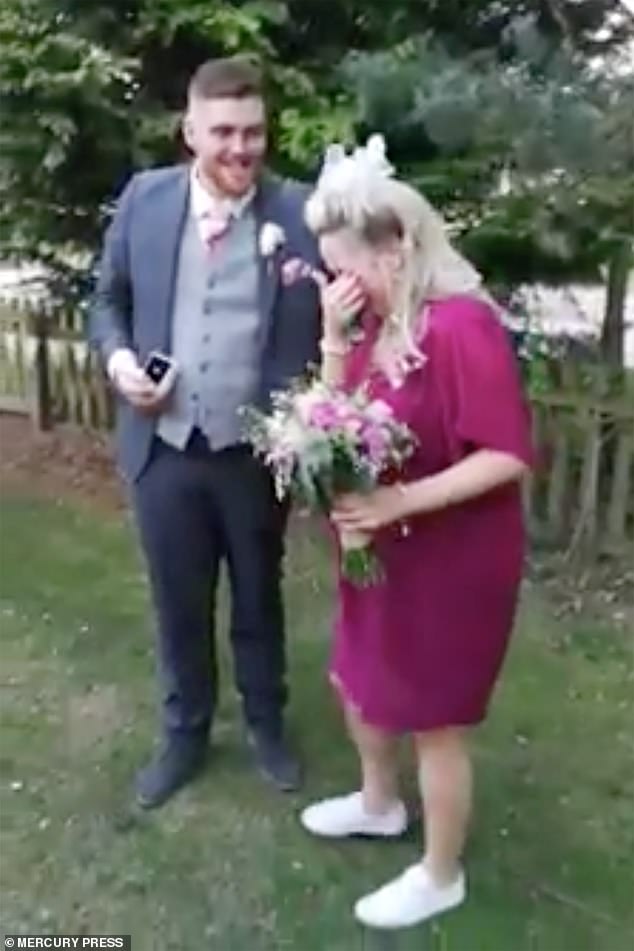 ‘I felt so proud of Kieran. For him to do it in such a romantic way was a massive deal.

‘We’re really close and I loved the fact he asked me to help. It was perfect.’

The secondary school teacher said carer Nikki and forestry worker Kieran sadly suffered a miscarriage when Nikki was 12 weeks pregnant in June last year, and it was then Kieran announced he wanted to get married.

Mother-of-one Jessica said: ‘He turned to me and said “I’m going to marry this girl.”

‘I thought “oh my God that’s so cute.” I said he could do it at my wedding. I thought it would be so romantic. 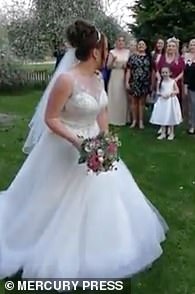 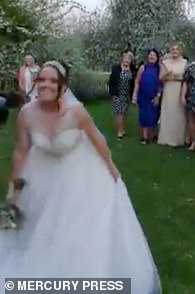 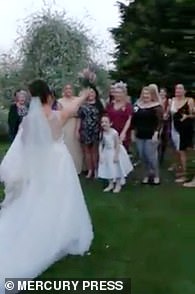 ‘Over Christmas I was going shopping with Nikki and we were trying on rings so I could get her size. She didn’t have a clue.

‘On the day Kieran was absolutely bricking it. He kept coming up to me and saying “when is it happening?”, even though I’d explained we’d do it after I cut the cake, and when I was going to throw the bouquet.

‘My family knew what was going to happen. We’d told the hotel staff and the wedding photographer – we’d known about it for months. 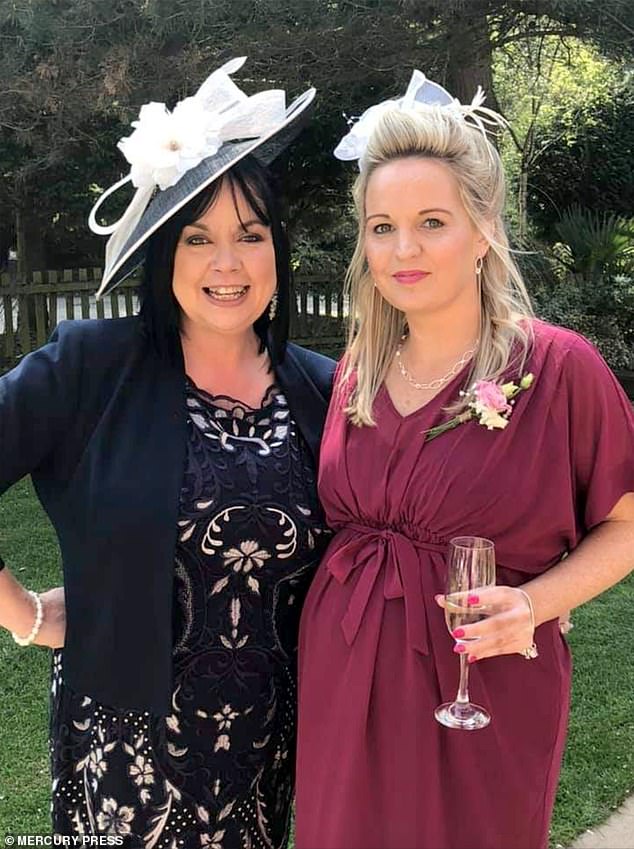 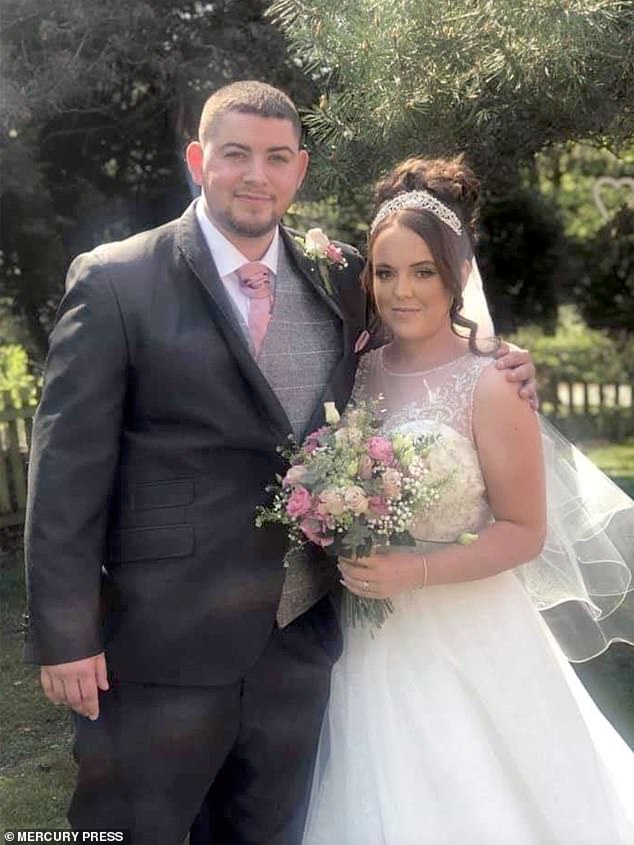 ‘I thought Nikki would clock on, especially when I handed her the bouquet but she didn’t. I had to turn her around and I could see Kieran out of the corner of my eye, so had to push her towards him.

‘She saw him then realised what was happening. It was a lovely reaction.

‘She hardly ever cries, so for her to get emotional – that’s saying something.’

Nikki, who is expecting a baby boy with Kieran at the end of June, said: ‘When Jess walked towards me and handed me the flowers I was puzzled and then I thought “well you give the flowers to the next one getting married” then I saw Kieran and thought “oh my God”.

‘I felt really emotional. I was trying to say yes but the words weren’t coming out. I was so shocked. I was speechless. 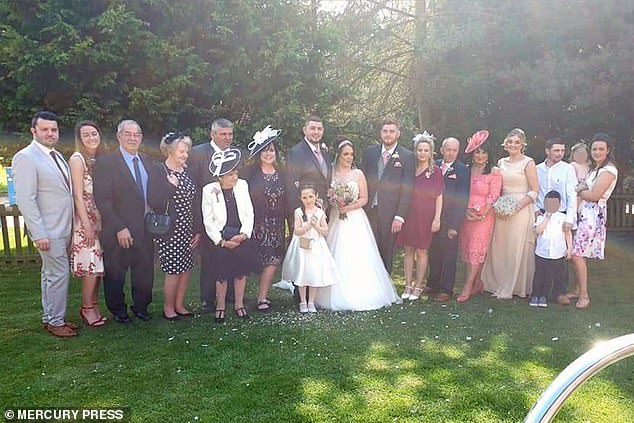 The wedding party at Jessica’s wedding to Dan Hughes earlier this month. Everyone knew Kieran (right, next to the bride) would be proposing to his girlfriend Nikki (right,next to Kieran)

‘It felt really special to have it on that day. I spoke to Jess about it afterwards and she said it had been planned for ages and she wouldn’t have had it any other way.

‘She said “that’s my brother and you’re carrying my nephew”.’

The mother-of-one said she had no inkling when her and Jess went shopping for jewellery.

Nikki said: ‘Now and then I’d say to Kieran you have to ask me eventually and he kept joking that he would when I was 40 and he’d probably propose on the sofa.

‘I’d never have expected him to do it that way. He’s not your typical romantic. It’s something I’ll always remember.’

Kieran said: ‘The proposal was something that you wouldn’t see every day.

‘I didn’t want to ask Nikki to marry me just on our own – I wanted it to be special so that’s why I thought it was a good idea when my sister suggested it.

‘Before the day I was trying to trick her saying stuff like “marriage is not everything” and so she didn’t suspect. She never thought I’d something like that. 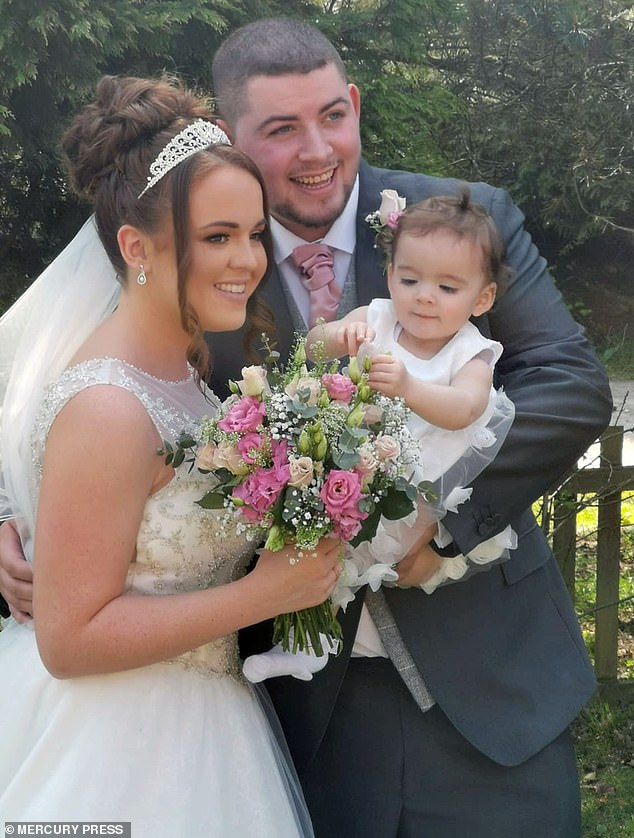 Happy family: Jessica with her husband Dan Hughes and daughter Emberly, one, on their wedding day

‘I was very very nervous before doing it because I didn’t want her to say no and because there were so many people watching us.

‘If she would have said no it would have been awful with the amount of people there.

‘I felt relieved when she said yes and didn’t make me look stupid in front of everyone.

‘I was over the moon as she is the love of my life, and we have a baby boy nearly here.

‘We’ve recently bought a house together so it’s the right thing to do.’