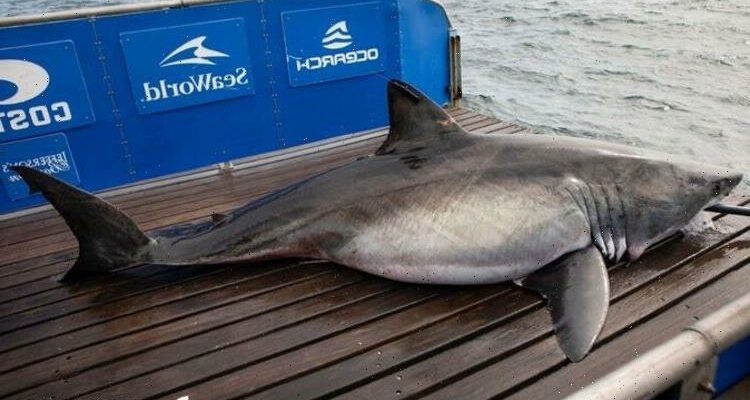 The gigantic shark was spotted on a radar transmitter last week swimming close to shore in North Carolina in the United States. The beast measures a whopping 13 feet 7 inches and weighs in at 1,701 pounds (121 stone). The shark, named Mahone, was first tagged off the coast of Nova Scotia, Canada in October 2020.

Mahone has since been tracked by scientists swimming up and down the North American coast.

His signal has been found multiple times along the coast of North Carolina over the past year and a half, with scientists believing the animal might be visiting the area in search of a mate.

The beast is one of three large great white sharks that have been tracked by researchers from OCEARCH, who track sharks across the world’s oceans.

One of the great whites being watched by the scientists is known as Ulysses, a 12-foot long beast weighing 990 pounds (70 stone) who was spotted off the same coast just days before Mahone on April 6.

Another 10-foot long, 715 pound (51 stone) great white dubbed Tancook was tracked near the Canadian island of the same name on April 9.

A transmitter releases a signal when a shark spends enough time at the surface of the water for satellites to accurately pick up its location.

OCEARCH recently launched a new sea expedition around North and South Carolina to investigate a theory that great whites migrate to the area to mate each year from all over the West Atlantic ocean.

Commenting on the mission, OCEARCH Chief Scientist Dr Bob Hueter said: “A last critical piece of the puzzle – when & where these sharks are mating – is within our grasp.

“All of our science points to the area off the Carolinas in late winter as the place where the adults come together to mate, so that’s where we’re heading.”

Scientists will continue monitoring the creatures to see whether their behaviour follows a pattern.

The news comes after a recent discovery of the solitary creatures prowling in pairs near Mexico’s Guadalupe Island.

Scientists were surprised to find the animals patrolling waters near the island in pairs, often spending more than an hour swimming together.

The unusual findings raised questions about why the solitary animals were spending time together, with researchers suggesting they could be sharing information about the location of prey or hunting skills.

Meanwhile, a number of fatal attacks by Great White sharks have made headlines around the world in recent months.

The news comes after two swimmers were fatally killed by a Great White shark off a beach in South Africa last on 4 April.

The mauled body of a man was washed up in La Lucia beach in Durban while the other body was spotted but taken away by the current.

A month earlier, a British man was killed by a shark in Australia in the first fatal shark attack in the area in over 60 years.

Simon Nellist, 35, was an experienced driving instructor who “loved the water”, according to his friends.

Several Sydney beaches were shut down in the aftermath of the incident.