Scientists say there’s little cause for long-term optimism in a new scientific report on the Great Barrier Reef, despite Environment Minister Sussan Ley seizing on it in her campaign against UNESCO’s proposed “in-danger” rating for the World Heritage-listed site.

If a week is a long time in politics, a month is an eternity. Long enough, in fact, for Ms Ley to go from being “blindsided” by UNESCO’s move to the minister herself blindsiding scientists when News Corp gained exclusive access to a key report. 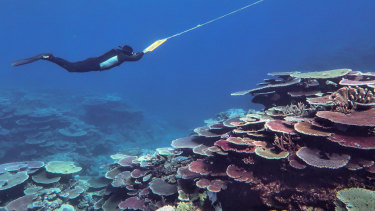 Ms Ley has spearheaded a public relations blitz ahead of Friday night’s vote by members of the United Nations Educational, Scientific and Cultural Organisation’s (UNESCO) World Heritage Committee on whether to impose an in-danger warning on the reef.

She flew to Europe on July 10 to lobby delegates on the committee, while ambassadors of more than a dozen countries were flown to the reef to see healthy corals.

On Monday, the minister pre-empted the official release of the Australian Institute of Marine Science’s annual report monitoring the health of the reef, which recorded a recovery in coral cover after swathes of it were denuded in mass bleaching events in 2016, 2017 and 2020. Ms Ley told The Australian the coral recovery figures showed UNESCO’s draft ruling had not been based on the latest information.

The overall finding of the AIMS report, though, was that the reef’s health remained “very poor”, according to research leader Dr Britta Schaffelke. AIMS said it didn’t engage in commentary on political decision makers.

UNESCO’s leaders have pushed back at Ms Ley’s criticism that she was “blindsided” when the World Heritage Committee failed to visit the reef before releasing its draft ruling.

The committee’s report backing the in-danger rating cited climate change impacts as a major factor, reflecting the frustration of many nations that have recently increased commitments to reduce carbon emissions by 50 per cent by 2030 and hit net zero by 2050. Australia’s policy is modest in comparison, with a reduction of at least 26 per cent by 2030 and no set deadline for net zero.

The summer of 2020-21 was relatively mild with no major cyclones, enabling a strong recovery in hard corals. AIMS reported 39 per cent hard coral coverage over southern reefs, 26 per cent in the central reefs and 27 per cent in the north. However, the growth was “largely due to increases in fast-growing acropora corals”, raising fears other corals had not fared as well.

“The Great Barrier Reef remains exposed to the predicted consequences of climate change, including more severe cyclones and more frequent and intense marine heatwaves. The observed recovery has been seen previously and can be reversed in a short amount of time,” the AIMS report said.

China is chairing the World Heritage Committee and Australian media reports have linked the country to the proposed in-danger listing. Ms Ley has not named China but has said “clearly there were politics behind it”.

Chinese Vice-Minister of Education Tian Xuejun, president of this year’s World Heritage Committee, said this week Australia should “fulfil the duty of World Heritage protection instead of making groundless accusations against other states”.

A recent Australian Academy of Sciences report said if the world warmed by 2 degrees, just 1 per cent of corals would survive. The earth has already warmed by 1.1 degrees and medium-range estimates forecast 1.5 degrees of warming by 2045 to 2050.

Tom Bridge, senior curator of Corals at the Queensland Museum and the Centre of Excellence for Coral Reef Studies at James Cook University, said despite the welcome growth in coral cover over the past few years, climate change was driving more frequent, catastrophic bleaching events, which would outpace the capacity of corals to fully recover.

Dr Bridge said coral recovery was driven primarily by fast-growing coral species but little was known about how these events had affected the overall diversity of corals on the reef.

“It’s great that there’s been recovery but the factors that caused the decline are still there and getting worse – this needs to be addressed,” he said. “The recovery is driven by a few fast-growing species of acropra corals and it’s possible we’ve lost diversity without even knowing.”