The Greens will be forced to pulp campaign letters translated into three languages for residents of high-rise public housing estates after the Department of Housing blocked access to the towers' mailrooms before close of polls on Friday.

The party says the decision – which means election material cannot be hand-delivered to the Kensington, North Melbourne and Carlton towers – highlights the uneven playing field minor parties face in this year's council elections. 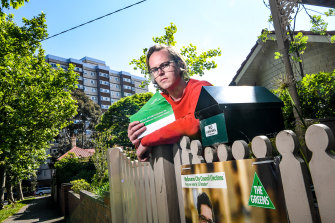 Greens candidate David Jeffery has labelled the decision “completely anti-democratic” and says it favours parties that can “buy access to our democracy”.Credit:Justin McManus

For the first time, all 76 Victorian councils going to the polls this month (another three are under administration) will take part in postal ballots. Under strict pandemic guidelines, candidates are not allowed to campaign outside their homes and, until restrictions changed this week, volunteers could only conduct letterboxing during a two-hour exercise break.

This means campaigning is more reliant than ever on expensive mailouts and advertising.

Unlike other candidates' teams, which have raised more than $200,000, the Greens have so far raised $28,778 in political donations to run their campaign for Melbourne Town Hall. Every dollar must be accounted for.

Councillor candidate David Jeffery, who grew up in public housing, said the department's directive was preventing residents of the high-rise estates from accessing legitimate electoral information.

"We're saying that grassroots campaigns like ours are being locked out of the political engagement process, in light of how expensive Australia Post mail deliveries are, and being the only option for us to engage," Mr Jeffery said.

"This is just completely anti-democratic, and public housing residents are missing out because their access to information is significantly limited to those who basically can afford to … buy access to our democracy."

But in an email to the Greens, deputy housing secretary Ben Rimmer said political parties would this year not be permitted to access public housing mailrooms because of the threat of coronavirus.

"In implementing COVID-safe principles across Department of Health and Human Services work sites, staff from housing offices across the state work from home where possible," Mr Rimmer wrote.

"Changes to normal operations have been implemented to comply with these principles. As a result, direct mailroom access is not available FOR ANY PURPOSE at this time, however, residents continue to receive mail via Australia Post services.

"In non-COVID times, the department does provide access to mailrooms for political parties to assist residents participate in electoral processes, AND FOR OTHER ORGANISATIONS. Restoration of on-site services will be reassessed in accordance with public health advice, as the COVID-19 situation changes."

He said candidates could instead mail residents via Australia Post.

"We definitely haven't budgeted for that," Mr Jeffery said. "We run a grassroots campaign, which is funded by local people and not corporations, so we don't really bring in that amount of funds."

Greens councillor Rohan Leppert, who is running for re-election, said it was "not a democratic election".

"Residents are only 44 per cent of the electoral roll in the City of Melbourne because the government already gives non-resident property owners double voting power. Now the government is preventing open political communication with residents, except through prohibitively expensive means," he said.

Voters must have their ballot packs in the mail or returned to their local election offices by 6pm this Friday.

The most important news, analysis and insights delivered to your inbox at the start and end of each day. Sign up here.