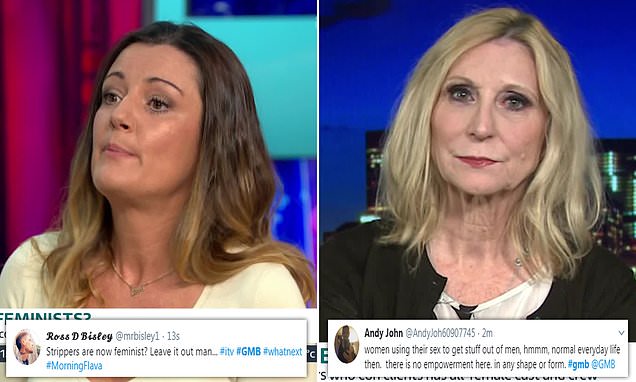 Can strippers be feminists? Author claims we should respect a woman’s choice to take her clothes off – but GMB viewers insist it’s a ‘slippery slope to exploitation and prostitution’

Good Morning Britain viewers were left divided following a heated debate over whether strippers can be feminists on today’s show.

The discussion comes following the release of the film ‘Hustlers,’ which features an all female cast and crew and tells of a group of strippers who con their male clients.

Stars including Jennifer Lopez have claimed the film is a feminist story, but two guests joined presenters Piers Morgan and Susanna Reid to discuss whether women taking their clothes off in front of men for money can ever be considered feminist.

Biba Tanya, a former stripper, argued that stripping oppresses women and it’s a ‘slippery slope for exploitation, trafficking and prostitution,’ while Christina  Hoff Sommers said we should not demonise women through their choices.

And viewers quickly took to social media following the segment – with many agreeing that stripping shouldn’t be classed as female empowerment.

‘Women using their sex to get stuff out of men, hmmm normal everyday life then. There is no empowerment here in any shape or form,’ wrote one, while a second penned: ‘Yes it is up to the woman but stripping isn’t empowering and it’s about time women had a better choice.’ 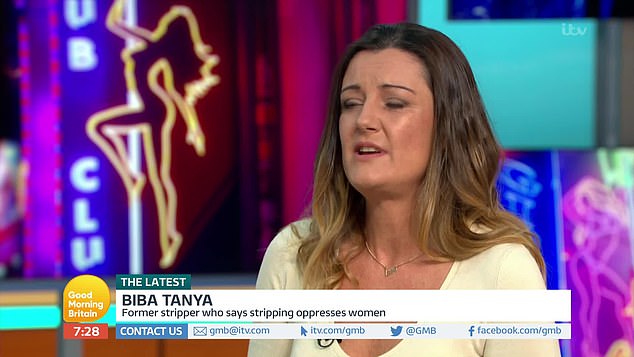 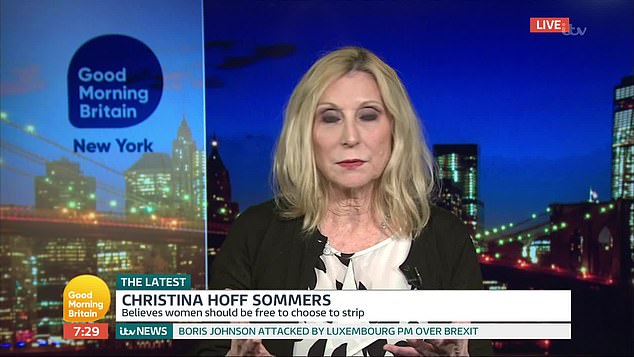 Christina Hoff Sommers, from New York, instead argued that we should not demonise women through their choices

Viewers were quick to take to Twitter following the debate, with one writing: ‘Women using their sex to get stuff out of men, hmmm normal everyday life then. There is no empowerment here in any shape or form’

The debate comes just days after Margaret Attwood, 79, who is the Canadian author of ‘The Handmaid’s Tale, spoke out in favour of stripping.

‘A lot of women actually do find [stripping] empowering. They feel they’re in control of the room when they’re doing it,’ she told Emma Barnett on BBC Radio 5 Live’s Headliners programme.

But Biba, who was a stripper from the age of 17 – 23, strongly disagreed and argued: ‘The film I think is empowering but the industry itself no. If you’d have asked 20-year-old topless on a pole Biba whether she was feminist she would absolutely have agreed she was.’

‘I was empowered, earning my own money. I was calling the shots. In hindsight now as a 38-year-old mother-of-three it’s a very dangerous industry.’

She added: ‘I don’t understand how an industry that sacks you if you have cellulite or tan lines is really doing anything for feminism or for the empowerment of women.’

In stark contrast, Christina, who appeared via video link, argued that a woman should be able to choose what she does with her body. 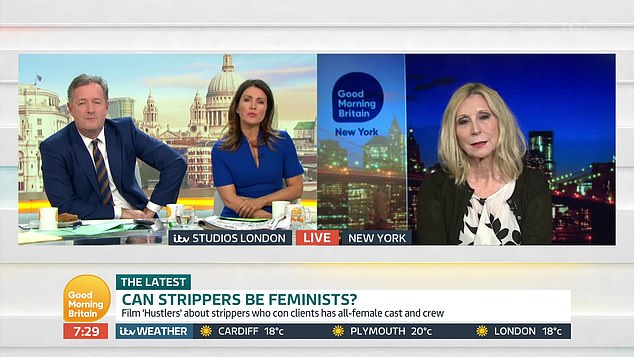 Another viewer questioned male strippers and asked: ‘Is that masculinity or exploiting women?’

‘I agree there are dangerous work places and places where you’d be exploited and of course women should be protected from sex trafficking and being abused,’ she said. ‘But feminism is supposed to be about liberation and women making choices.’

And the debate caused quite a stir online, with many agreeing with Biba’s argument.

‘Strippers are now feminist? Leave it out man,’ commented one, while another viewer questioned: ‘So what about male strippers, Is that masculinity or exploiting women?’

A third wrote: ‘Nope. Stripping is not female empowerment. You are a commodity, you are there to service the needs of dirty old men. If there wasn’t a demand for it, women wouldn’t do it.’

Meanwhile, Piers Morgan argued that perhaps the answer lays somewhere in between the two.

‘My issue is that it’s somewhere between. I find it ridiculous when Kim Kardashian posts topless selfies and flips the bird and says, “this is feminine empowerment,”  as any female can do this.’

‘But I do respect your premise that a woman should be to free to do whatever she wants to do with her body – and that should be respected.’

He added: ‘I can respect a woman’s right to do what she wants to do, but I don’t think it should be categorised as feminist empowerment. I don’t think it’s empowering or liberating to any woman to take their clothes off.’ 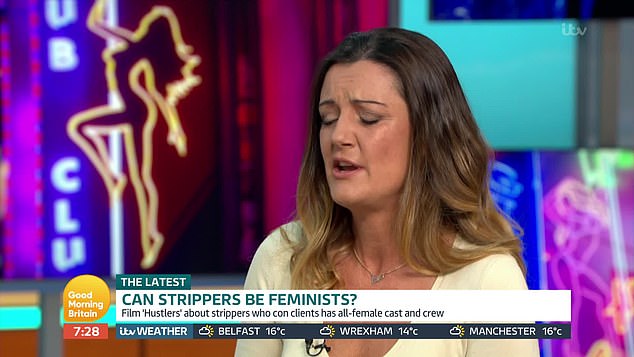 Biba Taylor (pictured), who stripped from the age of 17-23, argued that stripping is a ‘slippery slope for exploitation, trafficking and prostitution’