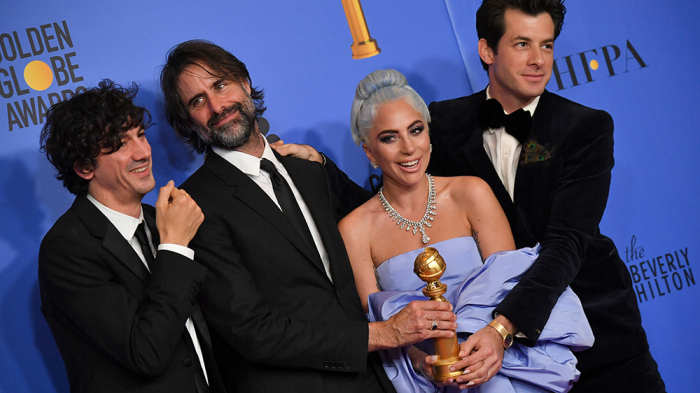 To the surprise of absolutely no one, Lady Gaga and her co-writers won the Golden Globe for Best Original Song for “Shallow” from “A Star Is Born.”

With Gaga in tears as she approached the stage, producer and co-writer Mark Ronson took the mic, calling her “the captain of the SS Shallow.” Addressing the audience, he said “when you write a song with Lady Gaga all you’re doing is making yourself into the best supporting cast you can be.”

Turning to the singer-actress, he added, “the genius comes from you. You’re the one who led us into the deep waters and truly made the song what it is with your devastatingly beautiful performance in the film, as an actor and as a singer, and we thank you for that.” Ronson also acknowledged Lukas Nelson, son of Willie, and his band Promise of the Real for performing the song in the movie and on the soundtrack.

Gaga added that “as a woman, it is really hard to be taken seriously as a musician and as a songwriter,” pointing to Ronson and co-writers Anthony Rossomando and Andrew Wyatt, who stood behind them. “These three incredible men lifted me up and supported me.” She added a thank-you to the song’s mixers (Tom Elmhirst and Brandon Bost) for mixing “Shallow” no fewer than 18 times, as well as to her co-star Bradley Cooper. “I love you,” she mouthed as the walk-off music began to play.

The soaring power ballad is the musical centerpiece of “A Star Is Born” and, with the Globe win, is now the favorite to win Oscar laurels as well.

It was Gaga’s second Golden Globe victory — she won in 2016 as an actor in the TV series “American Horror Story.”

Winning Best Original Score honors was Justin Hurwitz for his music for the Neil Armstrong biopic “First Man.” It was his third Globe, having won Best Song and Best Score in 2017 for the musical “La La Land.”

Hurwitz thanked director Damien Chazelle, the L.A. musicians and especially his music mixers because “a theremin score could have ended up being very annoying.” Hurwitz used the electronic instrument (a favorite of ’50s sci-fi composers) as well as synthesizers and a large orchestra to underscore the story of America’s first moon landing in 1969.

Speaking to reporters backstage, Hurwitz said he got his inspiration for the score from the “First Man” script. “There was so much there and so much I didn’t know,” he said. “I knew the very end of the story. I didn’t know about the losses and the heartbreaks the family faced along the way. … I was very moved by it.”

Hurwitz said the distinctive Theramin used in the score was kept very low in the mix until the actual moon landing sequences.

The Theramin reflects “Neil’s inner-most pain and the emotions he’s been very stoically bottling away the whole time,” he said. By the time of the landing) “he’s splitting open and his emotions are pouring out. The Theramin was coming to the front and could really sing and be lyrical.”