Gloria Katz, who went from a struggling screenwriter to a sought-after one when “American Graffiti,” a film she wrote with her husband, Willard Huyck, and the not-yet-famous director George Lucas became a surprise hit of 1973, died on Sunday in Los Angeles. She was 76.

Mr. Huyck said the cause was ovarian cancer.

Ms. Katz and Mr. Huyck had only a horror film, “Messiah of Evil,” to their credit when Mr. Lucas, who knew Mr. Huyck from college at the University of Southern California, asked them to help him write “American Graffiti,” a film about teenagers set in 1962. Mr. Huyck, in a telephone interview, said the studio was hesitant about the film at first.

“Universal finally said, ‘We’ll make ‘American Graffiti’ if Francis” — Francis Ford Coppola, who had just directed “The Godfather” — “ ‘is listed as a producer of the movie. And you need a new draft.’ ”

Mr. Coppola signed on, and the result was an American classic.

“The nostalgia boom has finally produced a lasting work of art,” Stephen Farber wrote in an essay in The New York Times after the movie came out, adding, “The stunning screenplay by Lucas, Gloria Katz and Willard Huyck is rich in characterizations, full of wit and surprise.”

The screenplay was nominated for an Oscar (it lost to “The Sting”), and in a 1974 article The Times said that Ms. Katz and Mr. Huyck were “generally considered to be the hottest young writing talents in town, able to command eye-popping sums for their work.”

Some of their subsequent movies, like “Lucky Lady” (1975) and “Howard the Duck” (1986), were critical and box-office bombs, but others did better, especially “Indiana Jones and the Temple of Doom,” a 1984 follow-up to “Raiders of the Lost Ark” that made an estimated $333 million worldwide.

Another exceedingly successful movie that the two worked on — although they were not credited — was Mr. Lucas’s 1977 blockbuster, “Star Wars.” Mr. Lucas, Mr. Huyck said, was having troubles during the filming and, nervous about the script, asked them to do a little polishing.

“We just tried to help with the characterization, to add as much humor as possible,” Ms. Katz told the website The Mary Sue last year. That included toughening up the character of Princess Leia, played by Carrie Fisher, who died in 2016.

“And because Carrie Fisher was so young,” Ms. Katz said, “the contrast between this young girl and her goals became more poignant.”

Mr. Lucas, who wrote the story Ms. Katz and Mr. Huyck adapted for “Indiana Jones and the Temple of Doom” and was an executive producer of that movie and “Howard the Duck,” remembered her distinctive contributions. 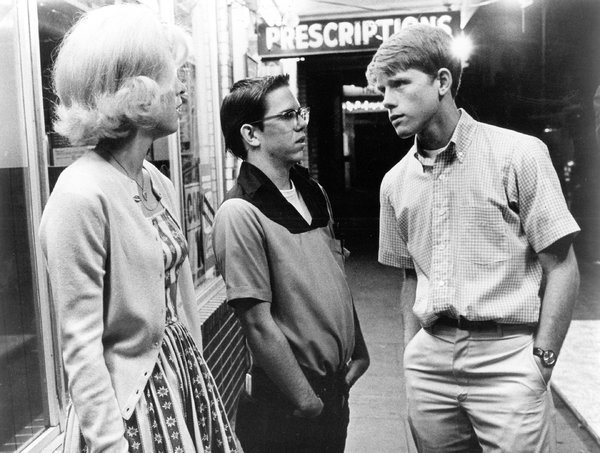 “Gloria was great in her writing and humor in terms of creating character and smartly forwarding the female point of view,” he said by email, “which she did on both ‘American Graffiti’ and ‘Howard the Duck,’ along with a dialogue polish on ‘Star Wars’ that was just plain funny.”

Gloria Pearl Katz was born on Oct. 25, 1942, in Los Angeles. Her father, Reuben, owned a truck terminal, and her mother, Pauline (Wallach) Katz, was a homemaker.

“We had four women in a class of 50,” Ms. Katz said in the Mary Sue interview, and they were often not taken seriously by professors.

She and Mr. Huyck married in 1969. (Mr. Huyck said she died on their 49th anniversary.) Early on, in the days of carbon paper and typewriters, their writing partnership was defined by one thing.

Mr. Huyck said they set their desks close together.

“We’ve always sat facing each other,” he said, “and would sort of start off by saying, ‘You got any ideas?’ ”

“Howard” has attained a sort of Hollywood infamy. Jay Carr, reviewing it for The Boston Globe in 1986, called it “one of the worst movies ever made, but without the energy of the kind of bad movies that are fun to watch.”

In addition to her husband, Ms. Katz is survived by a daughter, Rebecca Huyck.

In the Mary Sue interview, Ms. Katz expressed hope that Hollywood was becoming more open to women. But she also lamented the pace.

“I can’t believe how long it takes to change something culturally,” she said. “It just takes forever.”