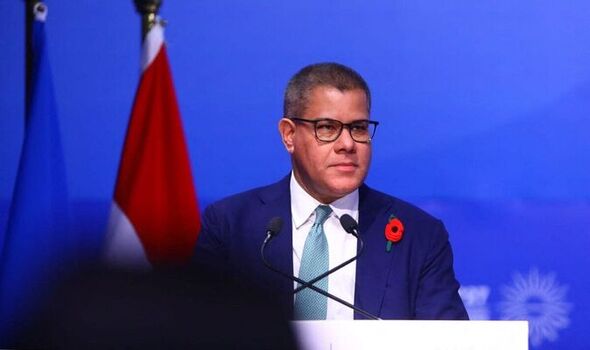 The UK Government’s representative at the Egypt conference, and the outgoing COP26 president, criticised elements of the deal during a speech at the closing plenary session of the UN climate talks. He said: “I said in Glasgow last year the pulse of 1.5C degrees was weak. Unfortunately, it remains on life support.”

“All of us need to look ourselves in the mirror and consider if we have fully risen to that challenge over the past two weeks.”

Mr Sharma admitted progress on loss and damage has been historic but he warned that it was not a moment for “unqualified celebration”.

Officials and negotiators in Sharm el-Sheikh agreed in the early hours of Sunday to the creation of a fund for compensating poor nations who are victims of extreme weather worsened by rich countries’ carbon pollution.

It is a big win for the countries who have long called for cash because they are often the victims of climate-worsened floods, droughts, heat waves, famines and storms despite having contributed little to the pollution that heats up the globe.

Many campaigners praised the breakthrough on the loss and damage fund, which according to the agreement will initially draw on contributions from developed countries and other private and public sources, such as financial institutions.

But it came alongside warnings that time was running out to curb global warming.

Mr Sharma said: “Many of us came here to safeguard the outcomes that we secured in Glasgow and to go further still.

“In our attempts to do that, we have had a series of very challenging conversations over the past few days.

“Indeed those of us who came to Egypt to keep 1.5C degrees alive and to respect what every single one of us agreed to in Glasgow, have had to fight to hold the line. We have had to battle to build on one of the key achievements of Glasgow.”

Rishi Sunak claimed “more must be done” to tackle climate change after negotiators got the last-minute deal in Egypt.

The Prime Minister, who had attended the global climate summit earlier, added: “I welcome the progress but there can be no time for complacency. Keeping the 1.5C degrees commitment alive is vital to the future of our planet.”

Katie White, from the Worldwide Fund for Nature, said: “While a deal on loss and damage finance is a positive step, it risks becoming a down payment on disaster unless emissions are urgently cut in line with the 1.5C goal.”

Countries will return to the negotiating table for COP28 next year in the UAE.