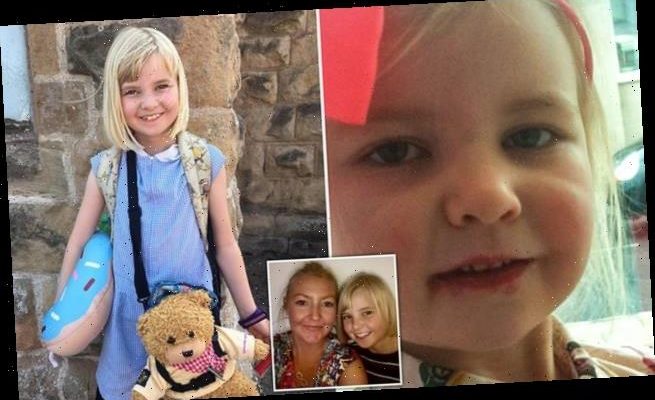 Mother whose little girl, 8, has suffered with cold sores since the age of one, praises a £7.95 liquorice balm for helping her get rid of the painful virus

A mother who revealed her daughter could catch a cold sore even if she so much as hugged her granny has praised a £7.95 balm for helping her get rid of the painful Herpes virus altogether.

Gemma Fleet, 36, from Skegby, has told how her daughter Daisy Fleet, eight, has suffered with persistent cold sores since the age of one.

But when over-the-counter creams failed to help clear the sores, the concerned mother found an unlikely solution in a liquorice balm.

‘Daisy started to develop cold sores from the age of one,’ explained Gemma. ‘At first I wasn’t sure what they were as I have never had one myself, but my mum does get them.’

‘I was surprised that Daisy could actually have a cold sore as she was so young, but the doctor confirmed that the nasty sore at the corner of her mouth was indeed a cold sore.’ 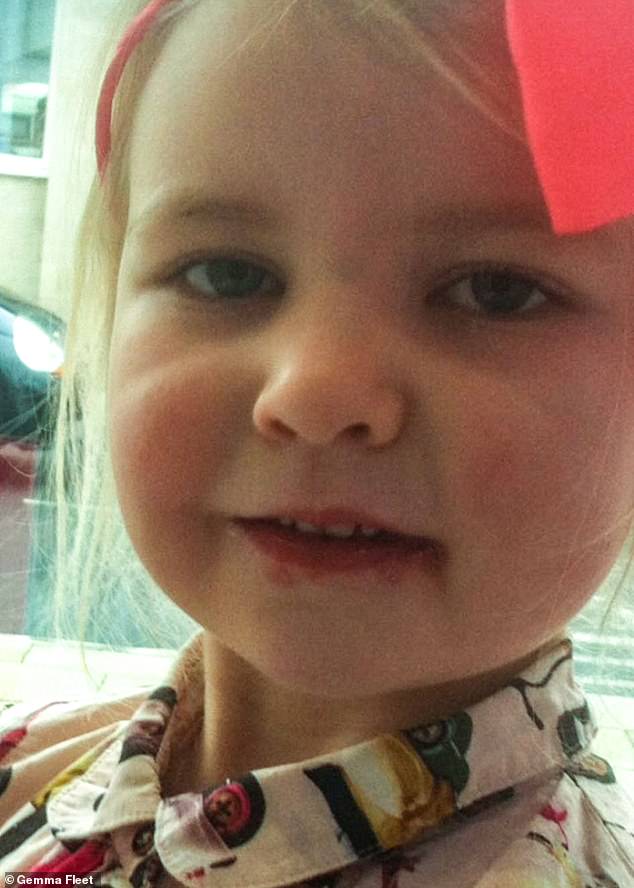 Gemma, 36, from Skegby, has revealed her daughter Daisy Fleet, eight (pictured), has suffered with persistent cold sores since the age of one. Pictured, aged five with the virus 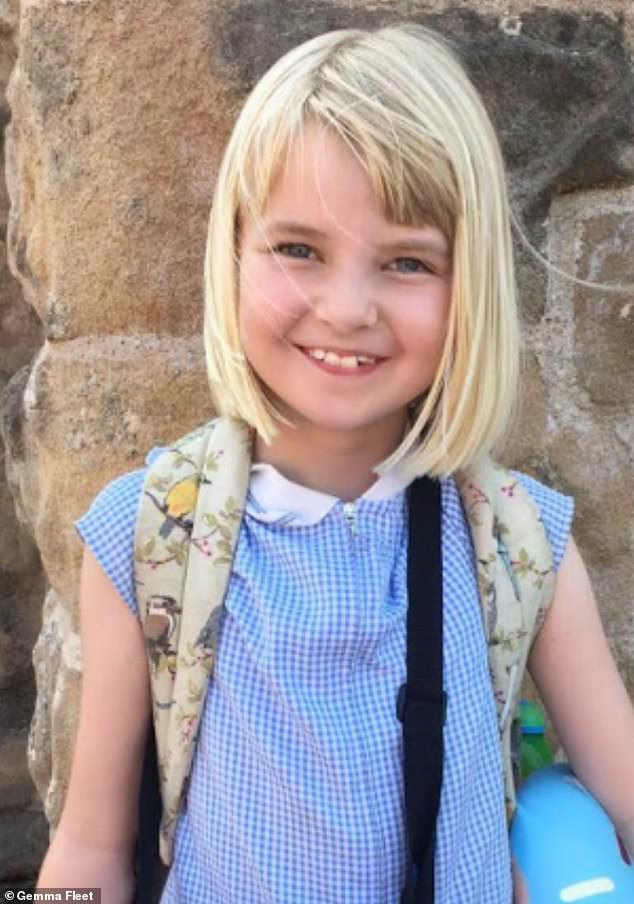 Gemma found an unlikely solution for her daughter Daisy in the form of  a liquorice balm. Pictured after applying the ‘miracle’ product 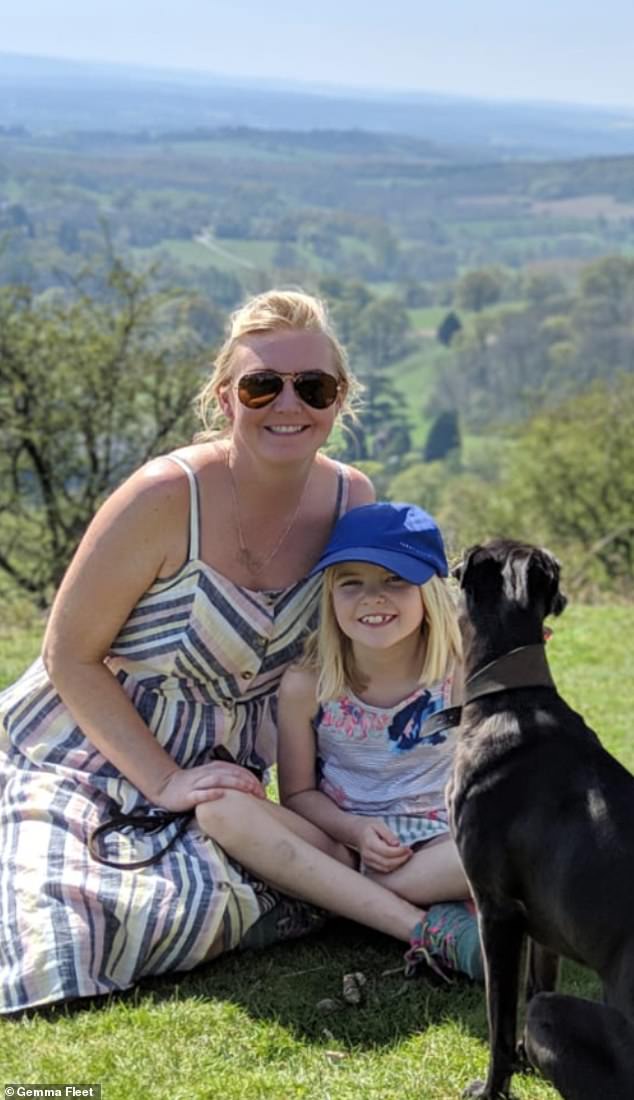 Gemma told how she was first surprised her daughter could actually have a cold sore as she was so young. Pictured, Gemma and Daisy

She added: ‘I’ve since learned that children are as susceptible to catching cold sores as adults, especially if there’s a family history of them because they’re so easy to pass on.’

‘Daisy didn’t have cold sores as a baby but there’s a chance that a cuddle with my mum or maybe another family member with a live sore may have resulted in her contracting the virus – they really are as easy as that to pass on.’

Ever since her first outbreak, Daisy would develop a new cold sore every few months.

As an infant she was unable to tell her mother she had the tell-tale tingle and so they would have to let the cold sore run its course. 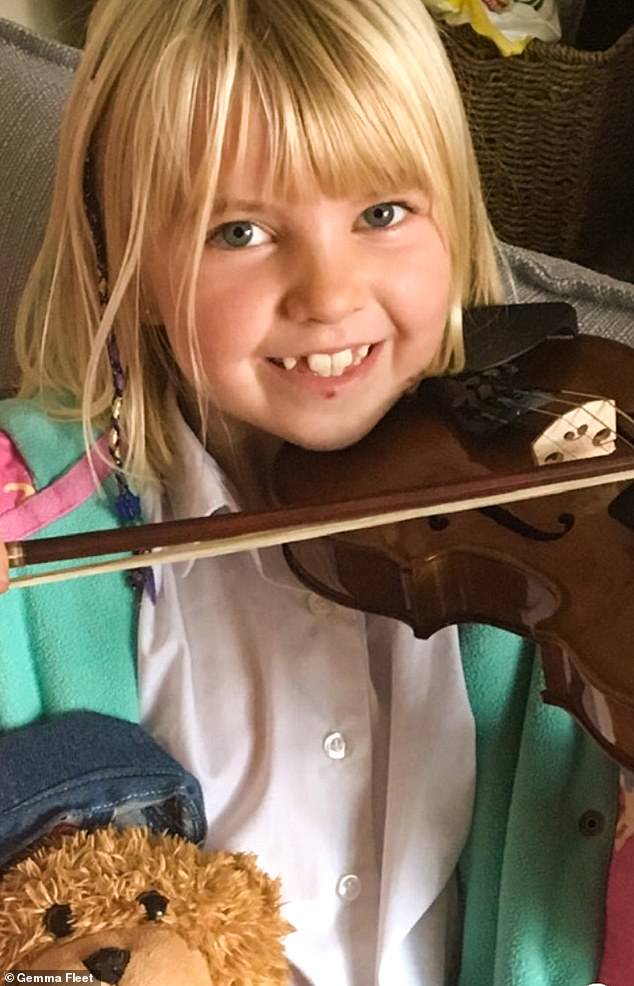 While Daisy didn’t have cold sores as a baby, a cuddle with her grandma or another family member with a live sore may have resulted in her contracting the virus. Pictured with a cold sore aged eight 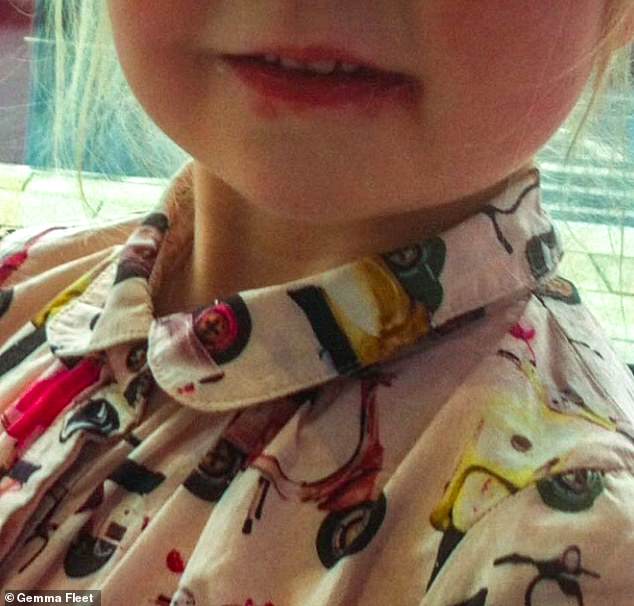 Gemma told how ever since her first daughter’s outbreak, she would then develop a new cold sore every few months. Pictured, Daisy with a cold sore, aged five 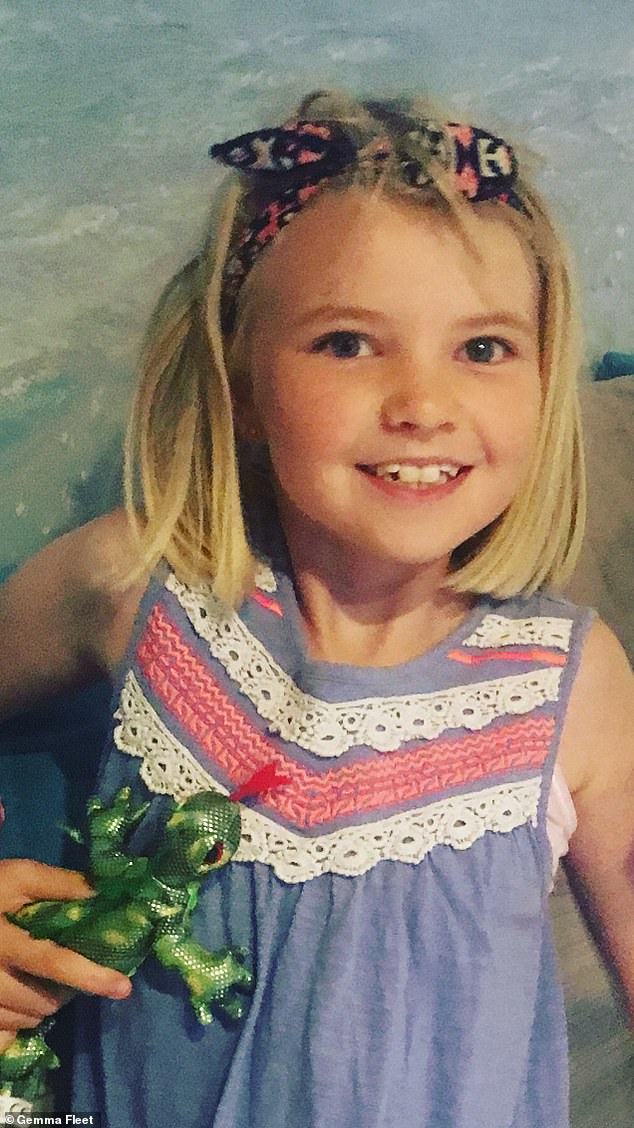 As an infant, Daisy was unable to tell her mother she had the tell-tale tingle and so they would have to let the cold sore run its course. Pictured, Daisy now, cold sore free

‘Normally we would use an over-the-counter cream like Zovirax, which can take anywhere from a couple of weeks to a month or even longer to clear the sores completely,’ explained Gemma.

While some sores were relatively quick to heal, one crop of them took a staggering three months. 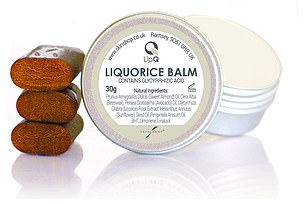 Gemma has praised the £7.95 balm for helping her daughter’s cold sores to disappear

‘During this time Daisy had sores in both corners of her mouth that kept cracking and weeping, and so they were easily spread,’ explained Gemma.

‘When they are really bad they can become infected and she’ll sometimes need antibiotics to clear the infection.

Over the years, Gemma says she’s definitely noticed a pattern to Daisy’s outbreaks.

‘Whenever we go on holiday she’ll get a cold sore, especially if we go somewhere sunny,’ she explained.

‘On one holiday to Bulgaria her sores were so bad they spread inside her mouth, which was really painful and difficult to treat.’ 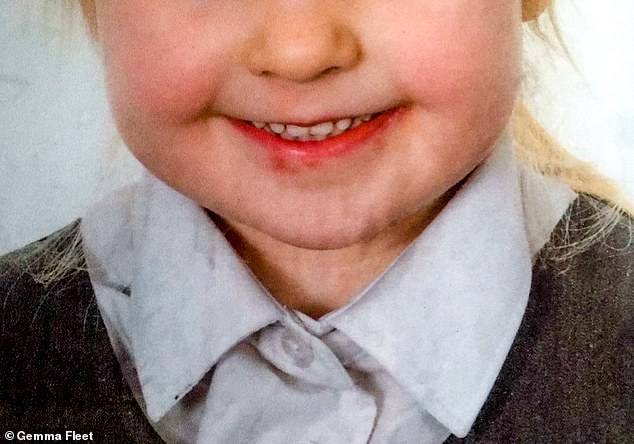 Gemma told how she noticed a pattern to Daisy’s outbreaks – including when they went on holiday to sunny destinations. Pictured, Daisy in her school picture with cold sores aged four 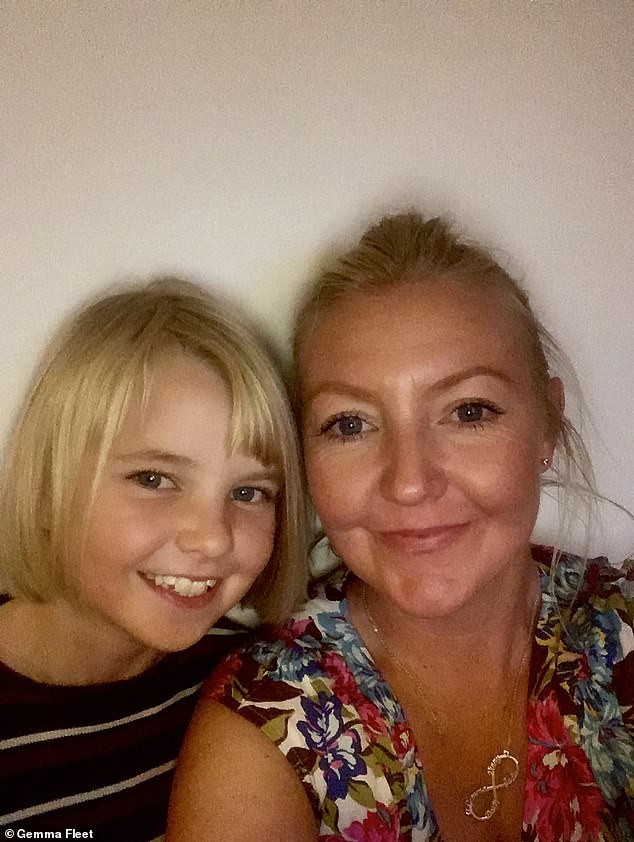 Before, Daisy cold sores got so bad that sometimes they would become infected and she’d need antibiotics to clear the infection. Pictured, Daisy with mum Gemma now, cold sore free 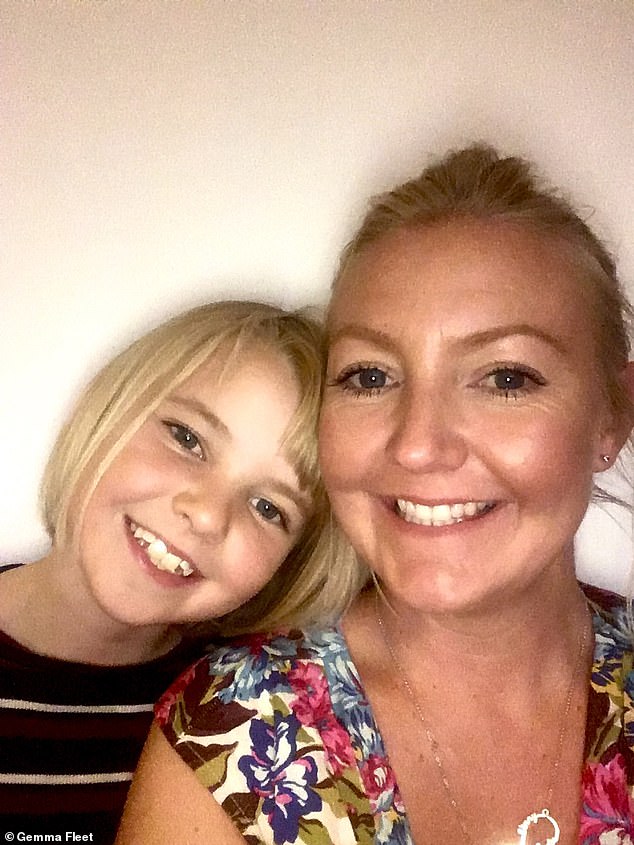 Before, Daisy would likely get sold sores if she didn’t get enough sleep or if she was stressed before a test at school. Pictured, cold sore free with mum, Gemma 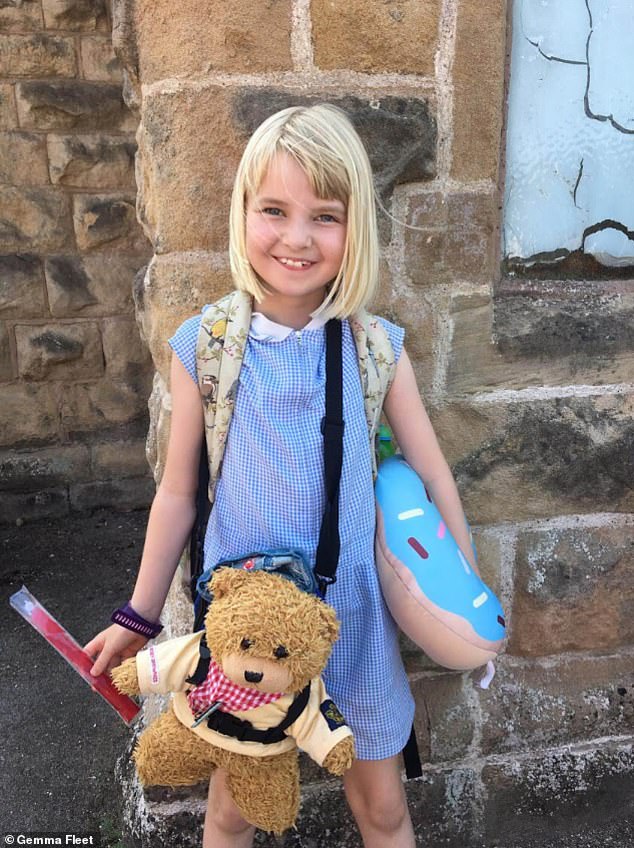 On more than one occasion, Daisy came home in floods of tears because one of the kids at school had poked fun at her. Pictured, Daisy recently outside school cold sore free

‘And whenever Daisy doesn’t get enough sleep, if she has a couple of late nights during the school holidays for example, or if she’s stressed before a test at school, or at the start of a new term, she’s almost guaranteed to get one.’

‘It’s quite normal for Daisy to start a new school term with a crop of cold sores.’

While Daisy copes with her cold sores remarkably well, Gemma says children can be cruel and on more than one occasion she has come home in floods of tears because one of the kids at school has poked fun at her.

‘They don’t understand and so they say nasty things like “Urgh, what’s that on your lip?” said Gemma.

‘I’ve taught her just to explain what they are and that she can’t help them. Her friends simply accept she sometimes has cold sores.’

What causes cold sores and what are they like?

Herpes viruses cause cold sores, which most commonly appear on the lips or genitals.

Around seven in 10 people in the UK are infected with the viruses.

However, only around one in three experience symptoms.

Cold sores on the lips most commonly get passed on by being kissed by someone with an active cold sore.

They begin as a small red patch that blisters before bursting, leaving a raw area that scabs.

Cold sores that appear on the face are most commonly caused by the herpes simplex type 1 virus.

It is rare for cold sores to spread away from the site they first appeared in.

Cold sores can reappear if triggered by stress, illness, alcohol or too much sunlight.

This is because the virus stays in a nerve junction near the spinal cord.

Many feel an itch, tingle or shooting pain before a cold sore reappears.

Antiviral medication may be prescribed if someone frequently suffers from outbreaks.

Keeping sores moisturised can stop them cracking and becoming painful.

Now eight-year-old, Daisy is able to tell her mum when she feels her lip tingling, which means they catch her cold sores earlier and they don’t last for as long.

‘Being able to recognise these early warning signs has helped considerably, but there’s a limit to what over the counter creams can do and I’d rather she not have them at all,’ explained Gemma.

Earlier this year, she read an article online about LipQ Liquorice Balm that could help with preventing cold sores.

‘This was what I felt we needed for Daisy, something that prevented them from forming in the first place that she could use between outbreaks,’ said Gemma.

‘According to the reviews and a trial carried out by the Herpes Virus Association, the balm helped to reduce the duration and frequency of cold sores, and it was 100% natural.’

‘I decided to contact manufacturers LipQ, and ask if I could try some for Daisy.’

Gemma was sent a pot for free and Daisy started to use the balm straight away.

She didn’t have a cold sore at the time but she had just recovered from one.

That was at the start of July and Daisy hasn’t had a single cold sore since.

Gemma added: ‘In that time she’s been exposed to all her usual triggers: late nights during the school holidays, a summer holiday in Spain and even a new term at school in September and a cold, and not a single sore, which is nothing short of a miracle as far as I’m concerned.’

‘She’s delighted to be rid of the painful sores and uses the liquorice balm every morning after she has brushed her teeth and every evening before bedtime,’ explained Gemma. ‘It’s such a relief to have found something that works for her.’ 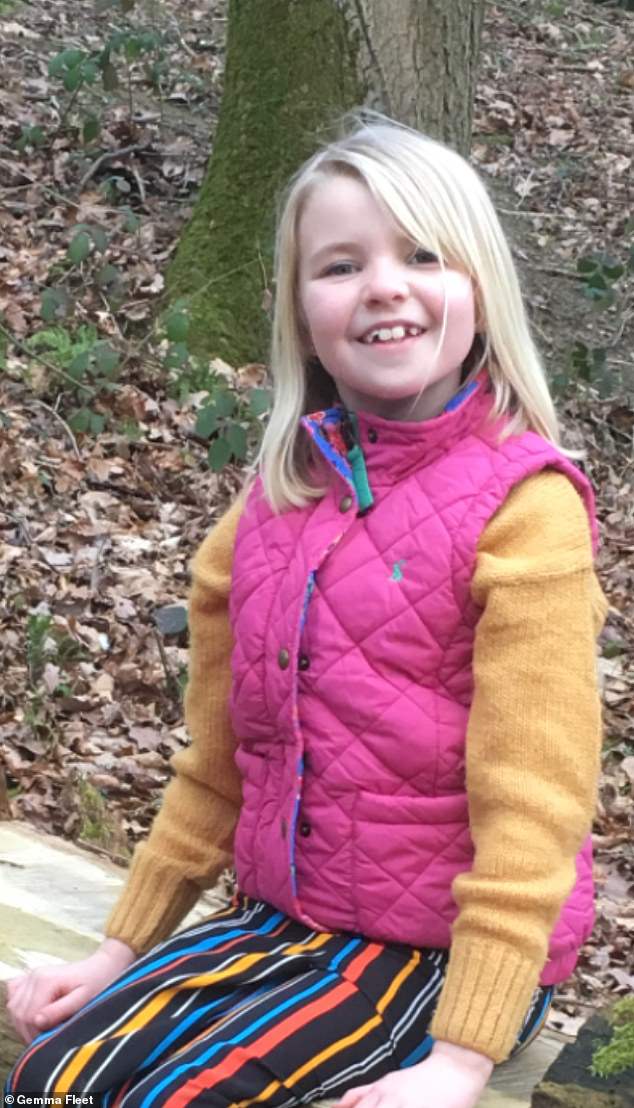 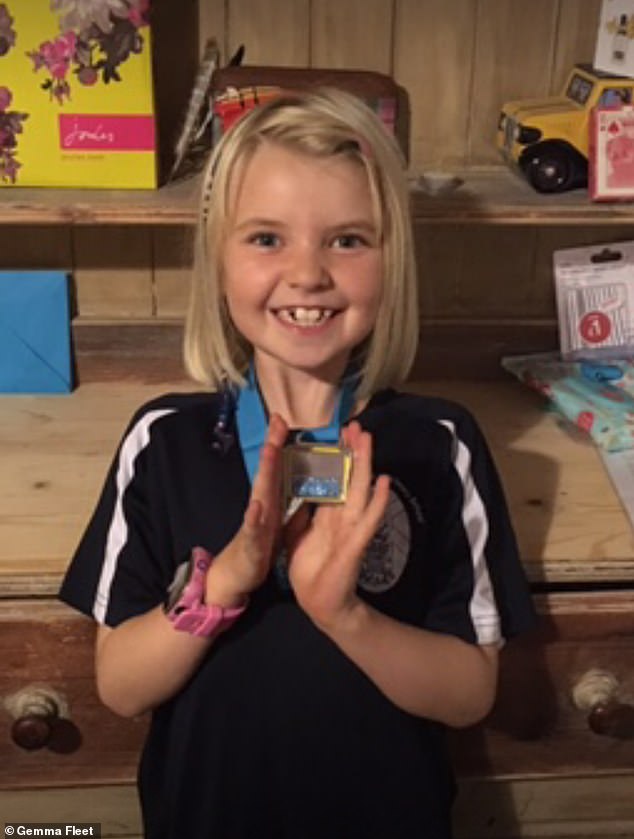