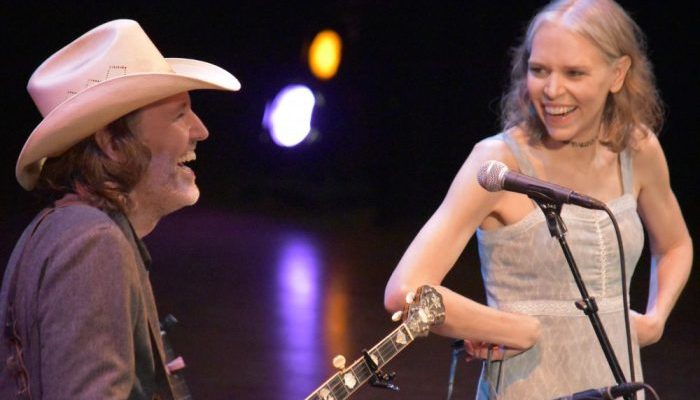 Singer/songwriters Gillian Welch and David Rawlings have already been announced as set to perform their Oscar-nominated song from “The Ballad of Buster Scruggs” on the Academy Awards telecast Feb. 24. But no one will have to wait till then to hear the writers’ take on the tune. They’ve released their own recording of “When a Cowboy Trades HIs Spurs for Wings” (see video, below).

The song is performed in the Coen brothers’ omnibus movie by actor Tim Blake Nelson and singer-turned-actor Willie Watson, who play gunslingers in the Old West who don’t let a duel that turns deadly for one of them stand in the way of an old-fashioned cowboy duet.

Welch and Rawlings are Americana favorites and theater headliners in their own right, so the recent decision to have the writers instead of actors sing the song on the Oscars was, while a rarity, not unanticipated in this instance. The duo did “When a Cowboy…” a number of times on the road last year as part of their set before “Buster Scruggs” was ever released. They’ll be doing it again live this Saturday when they appear on the Grand Ole Opry in their native Nashville.

Unlike the writers of some of the other best original song nominees, Welch and Rawlings are not actively engaged in an Oscar push, preferring to stick closer to home. It may not be any coincidence, though, that their version of the tune drops on streaming and download services today, the first day of the week-long window for Oscar voting. The digital release and that Opry broadcast could be the near-entirety of Welch’s and Rawling’s own late Oscar “campaign.”

There was a point at which no performance of the number on the show — by actors, writers or anyone else — was foreseen, since, as reported by Variety, word got out in early January that Oscar producers were planning on nixing “Spurs” and two other best original song nominees from the show. That early call was reconsidered under pressure and the three songs that were to be MIA were the first three announced for the telecast. The other two already officially slated are from “Mary Poppins Returns” and “RBG.” No word from the Academy so far on plans for the hit “A Star Is Born” and “Black Panther” songs, although it’s assumed that those go without saying, if Lady Gaga and Kendrick Lamar are successfully lassoed.

In a November interview with Variety, Welch and Rawlings laid out how they came to write “Spurs,” describing the assignment from the Coens as “a pretty straightforward thing: ‘Well, we need a song for when two singing cowboys gun it out, and then they have to do a duet with one of ‘em dead. You think you can do that?’ ‘Yeah, I think we can do that’,” Welch said.

It was an opportunity to do more of a throwback pastiche than they’d ever do for their own purposes as serious Americana heroes. “The more peculiar restraints you put upon a song, the more fun it is, so this was kind of a dream assignment,” said Welch. “And they didn’t tell us to do this, but if you’re writing a gunfight song between two singing cowboys, who wouldn’t love the opportunity to put some yodeling in?”

As a comedic pastiche amid the more sober material they’re known for, Welch acknowledged  that the song is “a little bit on the fringes of our of our set. But it definitely went over well (on tour) with everyone every night, and some nights, every punch line got a good laugh.. … I don’t really get to yodel enough on stage, so it’s a nice thing to throw in.”