Gene Littler, a quietly outstanding golfer who was known as Gene the Machine for an uncommonly smooth and consistent swing that propelled him to the 1961 United States Open championship, died Friday in San Diego. He was 88.

Littler’s death was announced by the PGA Tour. His son, Curt, told The San Diego Union-Tribune that he had neuropathy in his legs and had had several falls. In 1972, Littler had surmounted surgery for lymph cancer that had seemingly ended his career.

In his prime, though self-taught, he had “a perfect swing,” said Gene Sarazen, a winner of seven major championships. “Like Sam Snead’s, only better.”

Littler was typically self-effacing in assessing his form. “I just put the ball down and hit,” he once said.

Unassuming and devoid of glamour in an era dominated by Arnold Palmer, Jack Nicklaus and Gary Player, and relatively unimposing at 5 foot 9 and 160 pounds or so, Littler simply went about winning tournaments: 29 on the PGA Tour and another eight on what was then the Senior PGA Tour.

Littler, who lost two other majors in playoffs and another by one stroke, was a seven-time Ryder Cup player and was inducted into the World Golf Hall of Fame in 1990.

Littler was virtually ignored by the galleries in the early stages of the 1961 United State Open’s final round at Oakland Hills in Michigan. He was among a pack chasing Doug Sanders, who was three shots ahead after the third round, and he had injured a rib earlier in the year, sidelining him for two months. He had won a total of $116 in his first five tournaments of 1961. Not only that, but Littler needed to adjust his widely envied swing a few days before the tournament.

As Littler later told it, Ted Kroll, a fellow professional, “told me to hit the ball more directly, or more upright.”

Littler added, “I had a tendency to swing flat.”

It was Littler’s brilliant putting that carried him to victory at Oakland Hills, whose undulating greens frustrated many of the other contenders. He one-putted on six holes of the final round and needed only the customary two putts at the others, and he sank 15-foot putts at Nos. 7 and 13. After hitting into a bunker guarding the green on the 18th hole, he two-putted for a bogey 5 and a two-under-par 68 that bested Sanders and Bob Goalby by a shot. 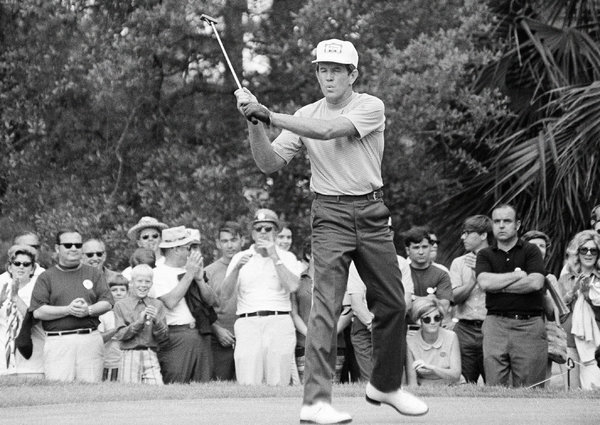 Gene Alec Littler was born on July 21, 1930, in San Diego and grew to love golf while playing on area courses. He graduated from San Diego State University and then entered the Navy. He won the United States Amateur and played in the Walker Cup amateur competition between the United States and a British-Irish team in 1953.

The prominent golf writer Herbert Warren Wind was impressed by the fluidity of such a young player’s swing.

“Gene took the club back with a very, very slow, easy, relaxed rhythm, then paused a lazy second at the top before droning slowly down into the ball, delaying his accelerated hitting action until the very last moment when the club head was only two feet or so from the ball,” Wind wrote in 1955 in Sports Illustrated.

While still an amateur, Littler won the San Diego Open in January 1954, and he turned pro soon afterward. He almost won the United States Open in June 1954, losing to Ed Furgol by one stroke, and then won four tournaments in 1955. He captured the Tournament of Champions in Las Vegas three consecutive times, from 1955 to 1957. Littler lost to Billy Casper, a friend since their boyhood in San Diego, in an 18-hole playoff at the 1970 Masters.

Two years later, Littler was found to have lymph cancer, requiring surgery. Much of the muscular structure on his left side was removed. But through arduous rehabilitation, he was able to regain the use of his left arm and rejoin the tour. He won the St. Louis Children’s Hospital Classic in July 1973 and received the Ben Hogan Award as comeback player of the year and the Bob Jones Award for distinguished sportsmanship in golf.

Littler went to a playoff at the 1977 P.G.A. Championship at Pebble Beach, losing to Lanny Wadkins on the third hole of sudden death after leading by five strokes with nine holes to play.

He retired from the PGA Tour after that season and joined the fledgling Senior PGA Tour in 1981. Three years later he fell from a ladder while working on one of his antique cars and fractured his left arm, which was already weakened from cancer surgery. But he won six times on the Senior Tour after that.

In addition to his son, is survivors include his wife, Shirley, and a daughter, Suzanne.

For all his achievements, and all the admiration for his swing, Littler struggled with self-doubt.

“I never gave myself enough credit,” he told The Union-Tribune in 1987. “If I could change anything, I’d change my attitude. I’d come out again like Nicklaus or Palmer. I think I had a lot of ability but I never had what those guys had, that confidence.”

The World Golf Hall of Fame quoted him once saying: “I drew a big gallery today. I was paired with Palmer.”