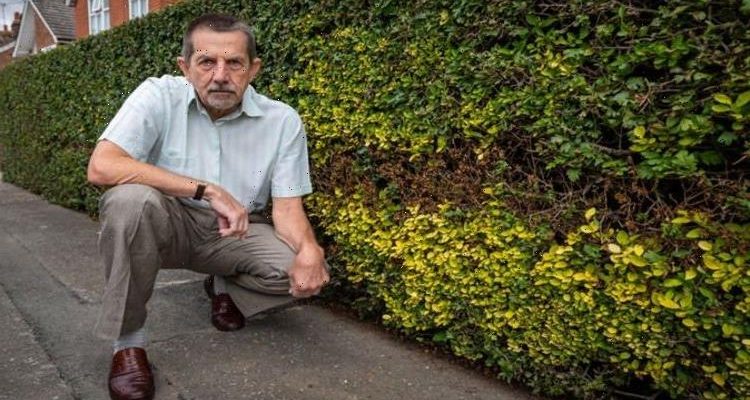 Chris Arter, 68, says his beautiful hawthorn hedge is a shadow of its former self after the red-hot exhaust of a concrete cutting disc inadvertently scalded a 20cm-wide line along the length of the 23-feet boundary.

Mr Arter, known locally as ‘Chris the Mole Man’ for his job in mole catching, has regularly trimmed the hedge every month to keep it in good shape. Now, he reckons it will take at least two years for his shrub, which is now covered in holes, to fully recover from the trauma.

He claims the hedge was damaged as engineers sliced open the pavement outside his home in Halstead, Essex, as they were installing broadband lines.

Mr Arter said: “I was horrified when I saw the hedge. There was a brown line straight along it. It is a lovely hedge, it has been there since the house was built in the 1930s. I’m a country boy, I was brought up on a farm, so I like hedges.

“I’ve been tending to that hedge for 20 odd years. I trim it once every month to keep it looking nice. It is going to take a long time to get that hedge back.”

Mr Arter claims engineering experts working on behalf of internet firm Gigaclear failed to apologise after causing the damage in May.

He said: “No one came around to apologise. They just cleared off. How could they leave a mess like that and not say anything?

“The company gave me a £4 box of bonemeal to make it grow back quicker. I was not impressed with that.”

Mr Arter, who has lived at the property with his wife for 23 years, is now demanding compensation for the hedge but says he hasn’t heard from either company since June.

A spokesperson for Gigaclear said the company tried to contact Mr Arter after a story about his ordeal appeared in the local press on Friday.

They added: “We have apologised and look forward to reaching a mutually agreeable resolution. Delivering and installing this infrastructure is an enormous undertaking, which can sometimes be disruptive.

“Unfortunately, on this occasion, the machinery used by our contractors to dig and reinstate the pavement accidentally damaged a hedge. We have contacted the resident to apologise and are currently in discussions with him regarding a resolution.”