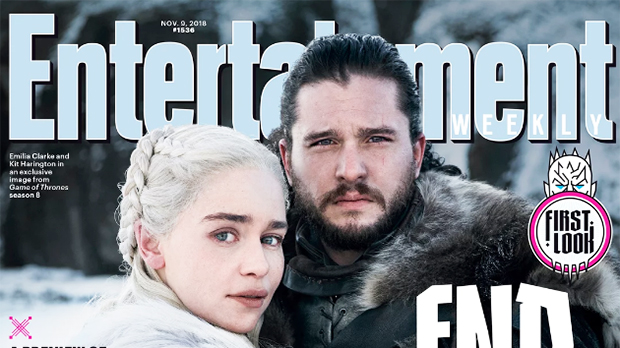 Winter is coming, and so is ‘Game of Thrones’ season 8. Jon Snow and Daenerys are together on the cover of ‘EW,’ which is also the very first photo from the final season of ‘Game of Thrones.’ Does this cover hint that Jonerys is endgame?!

Jon Snow (Kit Harington) and Daenerys (Emilia Clarke) cuddle in the first image from Game of Thrones season 8 and the latest cover of Entertainment Weekly. Jon Snow has his arm wrapped around Daenerys’s waist, while Dany’s hand is pressed against Jon’s chest. They’re all covered up — unlike the last time we saw them — and ready for the long winter ahead. The title of the Game of Thrones feature is “End Game.” While the endgame for the series is near, we can’t help but think having Jon and Daenerys on the cover could be a clue about their endgame status.

The last time we saw Jon Snow and Daenerys, they were making love on a boat. After feeling so much sexual tension whenever they were in the same room, these two finally gave into their feelings in the epic season 7 finale. Since Jon Snow is technically the son of Lyanna Stark and Rhaegar Targaryen, who is Daenerys’s dead old brother, that means Jon Snow and Dany are related. Daenerys is Jon Snow’s aunt, technically. But they don’t know that!

The first official photo from #GameOfThrones’ final season is here! ? How do you end the biggest show on TV? Blood, sweat, and lots of tears. Get behind-the-scenes details in our exclusive report from the set. Click the link in our bio for a preview, and pick up an issue on newsstands starting 11/2. #GoT ?: Helen Sloan/HBO

A post shared by Entertainment Weekly (@entertainmentweekly) on Nov 1, 2018 at 5:17am PDT

Jon Snow and Daenerys are in for their biggest fight yet against the Night King. Regardless of alliances, all of the characters are going to have to come together to defeat this relentless foe. The Night King has a massive army and the now-undead Viserion at his disposal. Game of Thrones season 8, which will consist of only 6 episodes, will debut sometime in the first half of 2019. A premiere date has not been officially released yet, but with the arrival of the first photo, we can likely expect more news very soon.