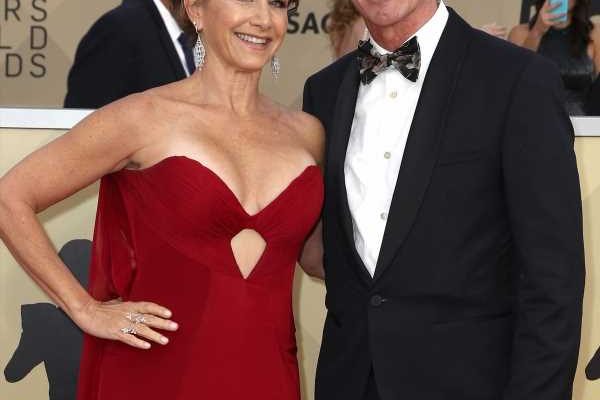 On the Beverly Hills, 90210 reboot, the cast members poke fun at their real lives playing themselves. Some of the references are obviously true to life and then there are other storylines that are purely for entertainment purposes. For instance, the fictionalized version of Gabrielle Carteris is a new grandmother, seemingly open to exploring an attraction to women. In real life, Gabrielle Carteris has been married to Charles Isaacs for decades and she is not a grandmother.

BH90210 isn’t the first time that Gabrielle’s real life and TV persona were very different. According to an article from People, Gabrielle actually got married to the stockbroker back in 1992 at age 31 while she was still playing high school teenager Andrea Zuckerman. Gabrielle and Andrea truly had two different lives.

People also reported that Jason Priestly, Luke Perry, Brian Austin Green, Tori Spelling, Jennie Garth, and Ian Ziering were all there to watch Gabrielle and Charles tie the knot in real life. Actually, the only main cast member who didn’t attend was Shannen Doherty, but it’s unclear if she just could not attend or if there was more to the story, i.e. the highly-publicized rift between Shannen and some of her costars.

According to Good Housekeeping, Gabrielle and Charles share two daughters together: Kelsey, who is 25, and Mollie, age 20. Her on-screen alter ego has a son, which she does not have in real life.

Gabrielle and Charles don’t have the most public relationship, but she has shown him a lot of love on social media. On May 4, Gabrielle celebrated their 27-year wedding anniversary with a series of photos and shout to the "love of [her] life."

That is a long time to be married, especially for a famous actor, but Gabrielle recently joked that she knows the secret to a long-lasting marriage. In May, she told her followers, "Couples who nap together stay together!" That makes a lot of sense, to be honest.

In a 2019 Father’s Day post, Gabrielle referred to her husband as "the most wonderful man in the world." As great as that is, her super stable marriage wouldn’t provide any drama for a scripted TV show. No wonder the writers took some creative liberties with her storyline. In an August interview with Entertainment Tonight, Gabrielle discussed the mixture of fact and fiction on BH90210. She began, "There is that degree of who we are today, so we’ll be doing a little bit of a play on that."

She went on to explain, "I think the best part is that little element of really who we are. It’s very freeing and then the idea that it’s not really all of us. It’s not [showing] all of who I am and that makes it even more freeing."

One part of the fictional Gabrielle that is very in line with her real life is that she is the president of the Actors Guild of America. That is not actually a real organization, but it is a fictional version (yes, there are a lot of fictionalized aspects in this show) of SAG-AFTRA, which Gabrielle has been the president of since 2016. She is actually in the running for re-election right now with fellow actors Jane Lynch, Geena Davis, and Octavia Spencer supporting her during the campaign.

It has been compelling to watch the TV version Gabrielle explore her identity, but it does not seem to be reminiscent to her current marital situation in real life. Who knows, maybe Charles will make a cameo.