IT'S that time of the year when many go teetotal in honour of Sober October.

It involves cutting out alcohol for 31 days, to raise money and awareness for Macmillan Cancer. 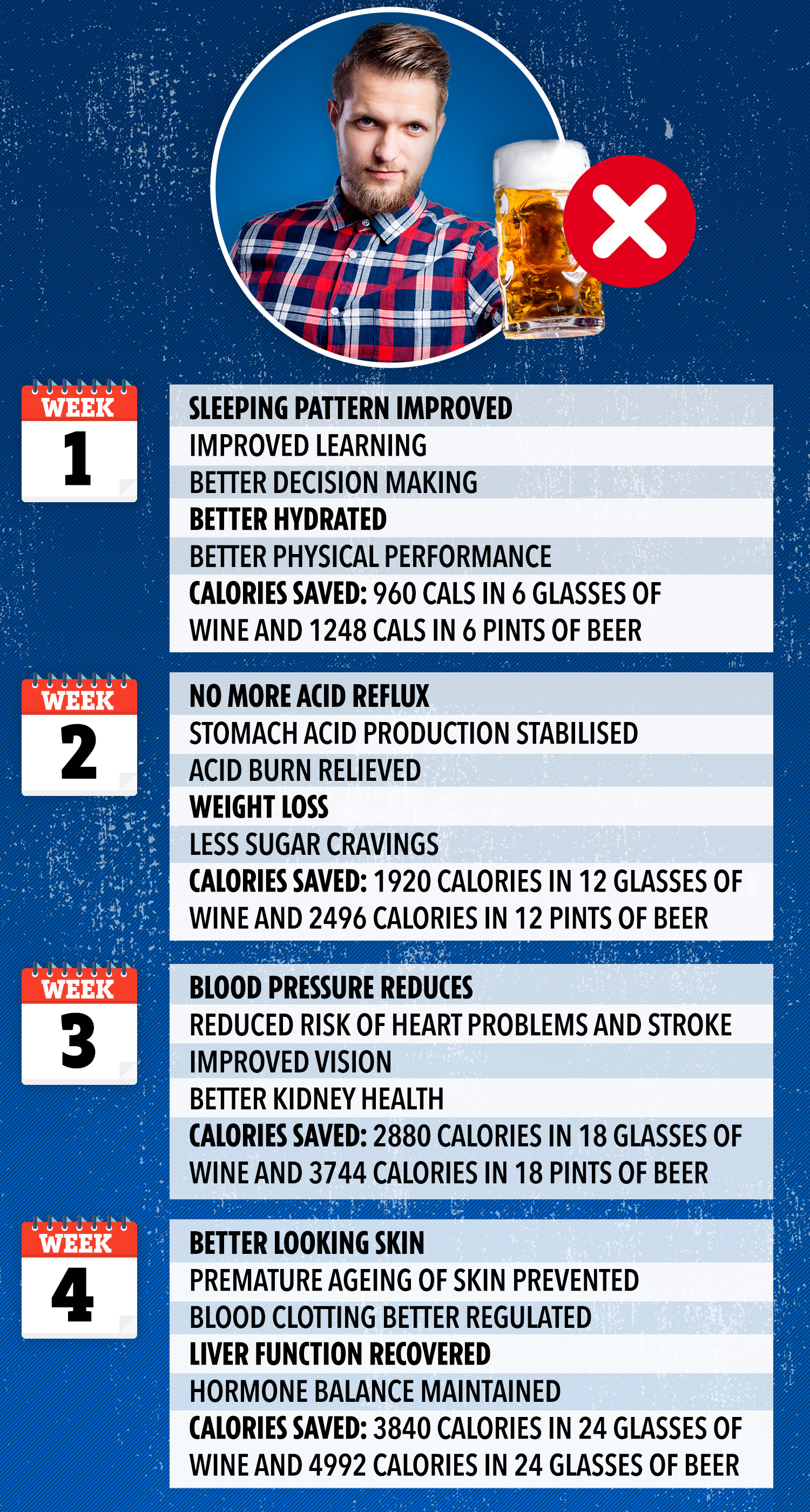 And if you've decided to ditch the booze for the next four weeks, you may be wondering exactly what impact it's going to have on your body?

As well as saving your bank balance, cutting out your weekly tipples will dramatically improve your health.

Quitting alcohol will improve your skin, your liver function, your blood pressure, your sleeping patterns and even aid weight loss.

Here, we look at exactly what happens to your body over the course of a month when you give up booze.

You'll wake up feeling a lot less tired and more energised after a week away from alcohol.

This is because alcohol interrupts your normal sleep pattern and makes your miss the important rapid eye movement (REM) sleep.

According to experts at The Priory Group, while you're supposed to have between six and seven cycles of REM sleep a night, you typically only have one or two when you've been drinking.

By cutting out alcohol you'll avoid this and get an additional five to six REM cycles a night.

Better sleep also comes with many benefits including being more productive and more effective at learning and problem solving.

Everyone knows that horrible feeling of being completely dehydrated and headachey after a heavy night on the booze.

You feel like this because when you drink alcohol, you lose around four times as much liquid as what you actually drank.

And the headaches come from your organs taking water from the brain due to their own water loss.

Giving up alcohol will cut this completely – which in turn is hugely beneficial for your brain.

Your mood and concentration will be more stable and the frequency of headaches will decrease.

After a fortnight without alcohol, you'll see a reduction in symptoms such as reflux where the stomach acid burns your throat.

Alcohol has a sneaky way of increasing your daily calorie intake without you realising it.

One pint of beer contains an average of 208 calories while a glass of wine may contain 83 calories.

On top of this many people find themselves reaching for a pizza or a kebab after a night of heavy drinking – which will make your calorie intake go up even more.

Cutting out alcohol will therefore mean you're consuming less unhealthy food and drink which in turn means weight loss.

There have been droves of people who have seen going teetotal completely transform their figures – including the two people above.

Cutting out booze will see your blood pressure slowly reduce to a normal rate.

Reducing your blood pressure can be crucial as it can help to lessen the risk of health problems occurring in the future including Type 2 diabetes.

In severe cases, drinking alcohol can trigger alcoholic cardiomyopathy (ACM), which causes the heart to swell and lose the ability to pump blood around the body.

If you cut out alcohol you'll not only reduce your chances of this happening to you but also have a healthier heart.

Giving up alcohol will have a great impact on your skin due to you having better levels of hydration.

When you succumb the urge to "break the seal" in the pub, this is actually putting your skin under strain.

TV presenter Susanna Reid quit alcohol when she realised what an impact alcohol was having on her skin.

She said: “I gave up because a doctor told me to. I was concerned because my skin was flushed, I kept getting flare-ups and blemishes, and they were leaving red scars.

“I’d tried all manner of creams and washes, but I knew deep down that what was happening to my skin was probably a manifestation of what I was putting into my body.”

Your liver function will dramatically increase when you remove alcohol from your diet for a month.

Given the liver plays a vital part in more than 500 processes, this will give your body a better chance of converting food nutrients, storing minerals and vitamins and removing contaminants.

A spokesman from Drinkaware told The Sun Online: "Weight loss and brighter skin are just some of the short term benefits to cutting back.

"It has also been shown to improve the quality of sleep meaning that people are less tired and less irritable and better able to concentrate.

"And for those who are drinking to relieve stress, reducing alcohol can also have a positive effect on mental health and well-being.

"However, people shouldn’t think that cutting back or having a break from alcohol for a short while means that it’s OK to drink to excess over the rest of the year."

If you can't completely shake the booze from your diet, Drinkaware recommends men and women only consume 14 units of alcohol per week – that's six pints of beer or six glasses of wine.

It also says drinkers shouldn't 'save up' their units and drink them in one go, instead it is best to spread them across the week.