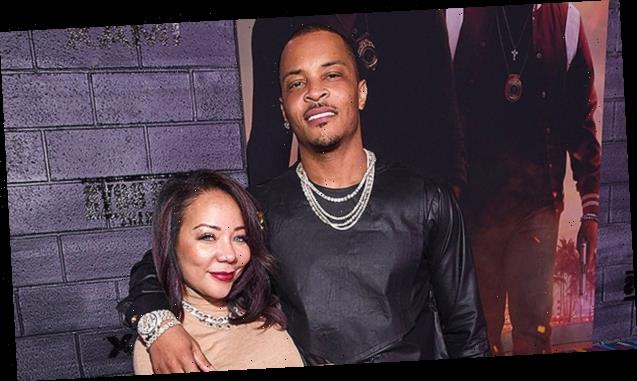 T.I. and Tiny are in a good place on the premiere of ‘Friends & Family Hustle,’ and he reveals why he’s actually ‘happy’ that the world knows about all the struggles in their relationship.

Season three of T.I. & Tiny: Friends & Family Hustle is here! To kick off this season, T.I. and Tiny revealed that their marriage is in a “great place.” Of course, this means they’ve come a long way since Tip was caught cheating on his wife in 2018. The story went viral at the time, but now, T.I. says he’s not upset about how much publicity the situation got. “It’s a great time in my relationship and in my marriage right now,” T.I. said during the Friends & Family Hustle premiere. “Trial and error has been my mentor. I’m happy for people to see some of my transgressions and some of the things we’ve gone through. They saw that that didn’t break us.”

Of their repaired relationship, Tiny added, “Me and Tip are in a very good place these days. Everything’s better than ever, actually. We’ve been really in love — old school love, like back in the day. Like, I just met you type of love.” Now that the pair’s relationship was healed, they were able to focus on their kids (the couple share three children together, while Tip has three from a previous relationship and Tiny has one from a past relationship). It was a bit of a transitional period for them, as all of the oldest kids have moved out, and only three were left at home.

“We’re empty nesters now,” Tiny revealed. “That’s a little sad for me. I enjoy having all the pitter-patter and all the people. I wish they would all stay little forever.” Amidst these nostalgic feelings, Tiny put her focus on the pair’s 11-year-old son, Major, who “beats to his own drum,” and hasn’t found a specific hobby that interests him like the rest of the kids.

Tiny was particularly worried about Major because of how close he was to T.I.’s sister, Precious Harris, who passed away in Feb. 2019. “Precious was Major’s auntie and tutor, and she always kept him whenever we needed her,” Tiny explained. “And of course, [T.I.’s son] King and Major were best friends, and he always helped push him to do things and try things. Precious is not here anymore, and King is growing up and doing his music, so I gotta tune into Major a little bit.”

Tiny revealed that she wanted to help Major find his passion, but T.I. wasn’t in total agreement with how she was going about things. “Do I think it’s good that she’s nurturing the younger kids? Yes. But I don’t think you can force a hobby on anyone,” T.I. said. “I think Tameka is doing these things because she’s thinking about her wants, wishes and desires, not as much for the best interest of the children.”

Still, he went along with Tiny when she took Major to a karate class. The lesson was successful, but by the end, it was clear that karate wasn’t going to be Major’s thing. “It’s not going to be easy to find Major’s passion,” Tiny admitted. “But as a parent, you never give up on your kids. We just need to keep looking and we won’t stop until we find something for Major.”