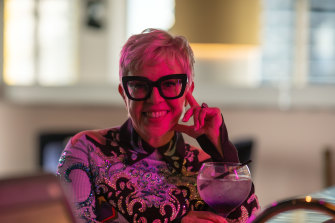 “In a film, I am the vase and Baz and the actors are the flowers”: Catherine Martin.Credit:Rhett Hammerton

Catherine Martin says she rarely thinks about the four Academy Awards she has won, more Oscars than any other Australian. But the celebrated costume and production designer admits that, well, there was one time she brought it up. And daughter Lilly, 18, never lets her forget it.

Martin, who won two Oscars for Moulin Rouge! in 2002 and then another two for The Great Gatsby in 2014, was helping with a dress fitting before Lilly’s junior prom when the family was living in New York. Lilly said she felt too short in a long dress with a low heel.

“I said ‘I’m guaranteeing you should just wear something really flat under the dress. No one’s going to see it – it’s a big princess dress – but I can make you look taller,’” Martin says.

“She was like ‘you have no idea, what are you doing?’ And I said ‘four Oscars can’t be wrong.’”

And so it proved. After Martin worked some magic with pins to create a train at the back of the dress, Lilly conceded she was right: even a small train tricks the eye into thinking you’re taller.

Martin is speaking in the no-fuss beachfront house that she, her director husband Baz Luhrmann and their extended family shared while making the Elvis Presley biopic Elvis on the Gold Coast.

Weeks from finishing the film, she looks relaxed – certainly more relaxed than Luhrmann at the same time – sitting comfortably on a couch and wearing a white and blue patterned pantsuit and sandals. Red-painted toenails and a silver ring are the only gestures towards the stylish designer looks she will soon wear at the Cannes Film Festival, Met Gala and premieres around the world.

It is sometimes said that Martin’s creative brilliance is overshadowed by Luhrmann’s high profile. But four Oscars can’t be wrong, not to mention five BAFTAs, a Tony and countless other awards.

Austin Butler’s performance as the king of rock and roll from a fresh-faced young singer in the 1950s to heavyset legend in the 1970s is a highlight of Elvis. So are Martin’s opulent costumes.

The best costumes serve many functions in movies. They show where characters are in their fictional lives and in the emotional arc of their stories. Thus there is optimism and sexiness in the stylish pink and black suit that young Elvis teams with a pout and perfect coif at a performance where the audience are strait-laced country music fans in muted colours. 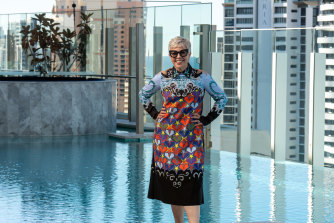 “Early on, I’ve got to say that my family situation and own mental health did impact on my ability to cope”: Catherine Martin.Credit:Rhett Hammerton

Costumes help establish the mood and tone of a movie, creating contrast between characters. Later in the movie, mature Elvis’ look is all reds, golds and blacks, compared to the greens and blues of his wily manager, Colonel Tom Parker, played by Tom Hanks.

Some costumes are reworkings of famous outfits, including Vegas-era Elvis’ white jumpsuit; others take inspiration from the archives of Prada designer Miuccia Prada, who collaborated on the film.

Showing the scale of Elvis, even the Memphis Mafia – the relatives and associates who surrounded Presley – had 26 costumes each.

Martin, 57, grew up in Lindfield on Sydney’s north shore as the daughter of a French mother and an Australian father, both academics. Keen on sewing as a child, she became fascinated by the technicalities of costume, design and fashion, developing an interest in film from watching The Wizard of Oz and Gone with the Wind.

While doing a design course at the National Institute of Dramatic Art after studying visual arts at Sydney College of the Arts, she met Luhrmann. As he says: “I just met her and went, like, ‘I never don’t want you in my life.’” 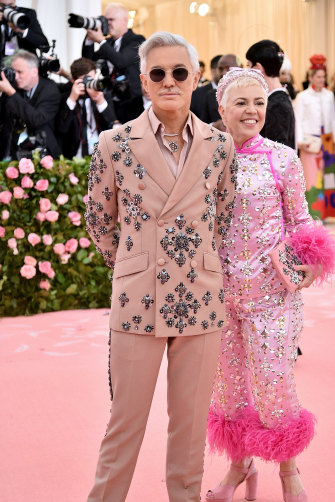 Catherine Martin with Baz Luhrmann at the 2019 Met Gala.Credit:Getty Images

Married in 1997, they have forged one of the great collaborations in Australian film, theatre and opera that has also run to musicals, television, commercials for fashion houses and perfumes, hotel design, and her line of designer homewares.

So how does she see their creative relationship? Martin cites a phrase from ballroom dancing: the woman is the flower and the man is the vase.

“In a film, I am the vase and Baz and the actors are the flowers,” she says. “Baz has a vision for what he wants, always. He tells me what he wants and I try and translate that into reality.

“Things like costume design and production design are the scaffold that allow the story to be told in all its glory.”

Luhrmann says Martin’s genius is being able to take an idea and make it a reality.

In a film, I am the vase and Baz and the actors are the flowers.

“It isn’t this thing of CM does the design then I move the traffic around,” he says. “I have a visual language that I’m working all the time from day one, [creating] scrapbooks and tear sheets.

“I’m just a terrible drawer so her burden – and the storyboardists’ too – is they have to interpret what she calls very emotional scribble.”

So what was the biggest challenge on Elvis?

Martin says it was the sheer scale of the production – creating a 159-minute movie filled with often-complicated period scenes. As well as sets at Village Roadshow Studios on the Gold Coast, they created movie versions of Graceland and Memphis’s Beale Street.

“It was just really difficult,” Martin says. “And early on, I’ve got to say that my family situation and own mental health did impact on my ability to cope.”

Like so many others during the pandemic, their extended family faced health and personal dramas that added to the pressure of making Elvis.

“I’d underestimated the sheer scale of it and just what it would take to get clothes on bodies,” Martin says. “There’s just such a process from a fitting to a sign-off from me to a sign-off from Baz, and then all the alterations of every background costume.”

Martin says Butler proved to be the most patient person in the world during costume fittings. 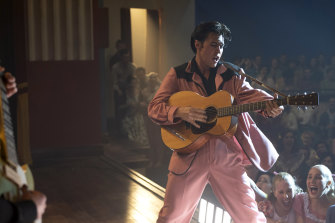 Taking to the stage in a sugar pink and black suit for an early performance: Austin Butler as The King in Elvis.Credit:Hugh Stewart/Warner Bros

“We had a series of fat suits that he had to put on as Elvis got chubbier,” she says. “Sometimes we’d be trying to fit him in 25 jumpsuits. And we could never do 25 in a row. Even doing seven jumpsuits is exhausting after an entire day of rehearsal.”

“I feel really embarrassed saying that,” Martin says. “It’s taking this iconic suit, translating all the design lines like the pockets, the height of the waist [for] when he lifts his arm up, the amount of flare [in the pants], how it goes over the boot, how we keep the flare down, how the collar sits, why the jacket is rolling back, all these things, and just working at it time and time again.”

When Luhrmann thought the leather wasn’t thick enough, they remade the outfit in a different leather.

“Then we’d be comparing them both on screen and in movement, then collaborating and coming back to ‘oh, I think we need to do these parts in the stiff leather but these bits in the less stiff leather’ to make it work.” 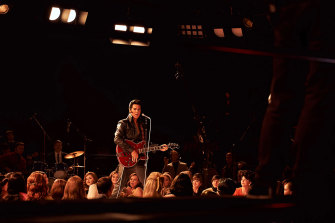 Austin Butler wore more than 90 costumes to play Elvis Presley from the 1950s to the 1970s.Credit:Hugh Stewart/Warner Bros

The next time we talk, Elvis has started screening. In a room at the Park Hyatt hotel the day after the Sydney premiere, Martin wears a white robe from the hotel bathroom to keep warm. “I’m freezing,” she says, amused at how she must look. “For a costume designer, I don’t seem to be able to dress myself.”

Having been feted at the Cannes Film Festival and other early screenings, she is looking forward to joining her dad in Paris for six weeks after the Memphis premiere.

“I want to do a bunch of things I’ve never done before, which sounds ridiculous because I’ve been going to France since I was 10 months old,” she says. That includes seeing theatre at the Comedie-Francaise and operas at the Palais Garnier and Opera Bastille. 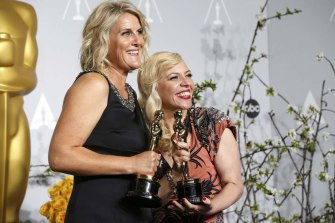 Catherine Martin and Beverley Dunn with their Oscars for best art direction for The Great Gatsby.Credit:Reuters

For at least the next 18 months, home will continue to be on the Gold Coast, where Lilly and “Egg”, 17, are studying. And while their spectacular five-storey New York house is on the market for $US20 million ($27 million), they plan to buy an apartment for future stays.

Until they decide on a next project, Martin will work on her homeware range and investigate innovative merchandise for their films – possibly a line of Romeo + Juliet clothing.

While box office will determine the success of Elvis in the next month, she feels great about what they have achieved.

“I know it sounds like I’m big-noting myself but I’m really proud of the film,” she says. I think Baz did an amazing job. I really thought, ‘oh wow, you’re really pushing your style forward and you’re not just resting on your laurels.’”

The spectacular production design and costumes breathe life into the story. As Lilly now knows: four Oscars can’t be wrong.

Elvis opens in cinemas on June 23.