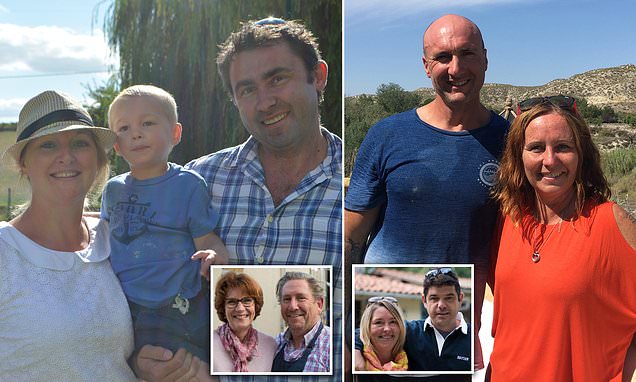 The great escape: Four couples start new lives in Europe to avoid BREXIT – and insist life is BETTER than ever thanks to their booming business ventures (not to mention the weather!)

Many of us wish we could escape the daily deluge of bad news on Brexit. But some couples have done more than just dream, and have turned their backs on Britain to start new lives in Europe – all to escape the uncertainty of the UK’s EU departure.

In the new series of Channel 4’s ‘A New Life In The Sun’, which airs tonight, four families who once saw the UK as their permanent home have headed for sunnier climates and hopes of a more secure future.

They have all set up new business ventures – including one couple who have opened a glamping site in France and another who run a cave house B&B in Spain.

For some, moving was a lifelong dream and Brexit was the final straw, but for others Brexit is what made them totally reevaluate their lives in the UK.

And they insist that life is better than ever after taking the plunge, thanks to their businesses thriving, a better work-life balance and much more clement weather. 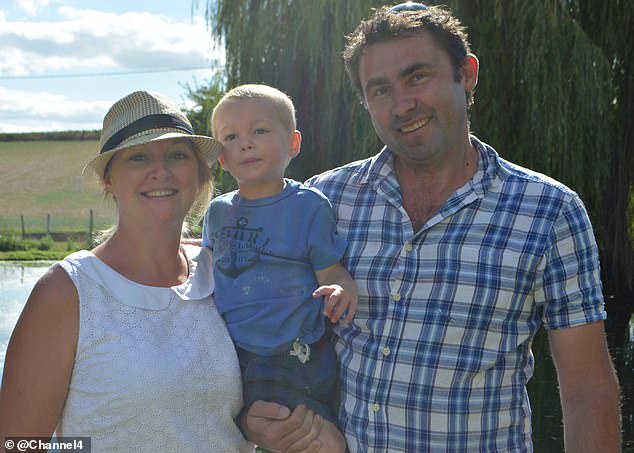 Elena Terraneau, 39, Scott Medley, 41 and their son Louis, two, who were living in a small flat in Canary Wharf, moved to France at the end of July 2017 and have now opened up a luxury gite 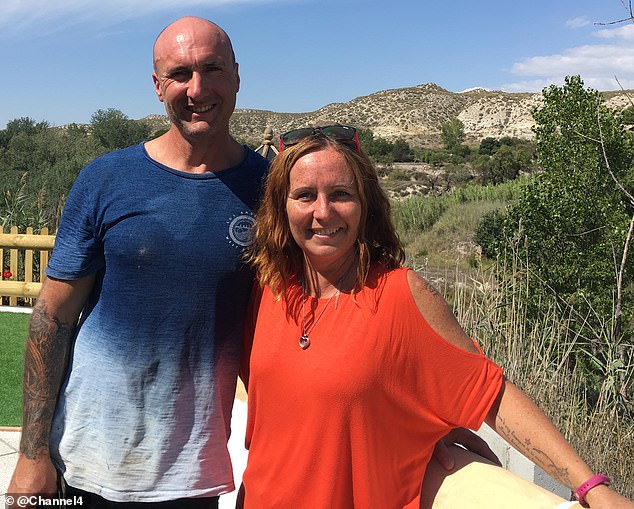 Michelle Rowe, 46 and Rob Paris, 49, decided to move to Galera, Andalusia in Spain in May 2018. They have since launched two beautiful cave B&Bs on the outskirts of the town 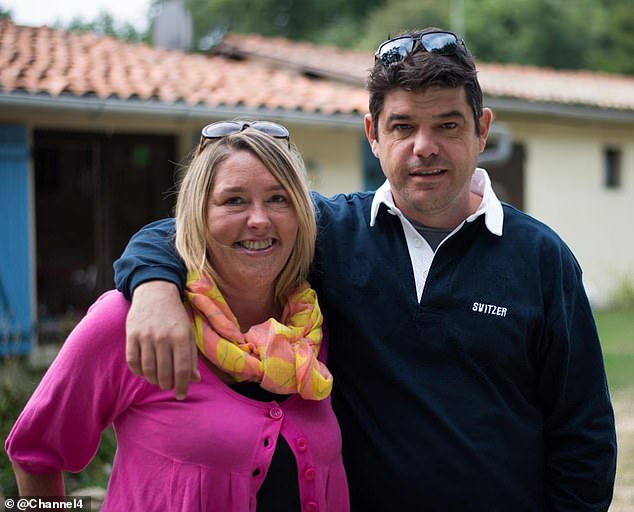 Katherine, a former solicitor and partner and Henry Walker, 41, a contract manager for civil engineering firm, moved to France with their two children Daisy, 11 and Polly, 8 in June 2016. They bought a rundown campsite and turned it into a successful glamp site 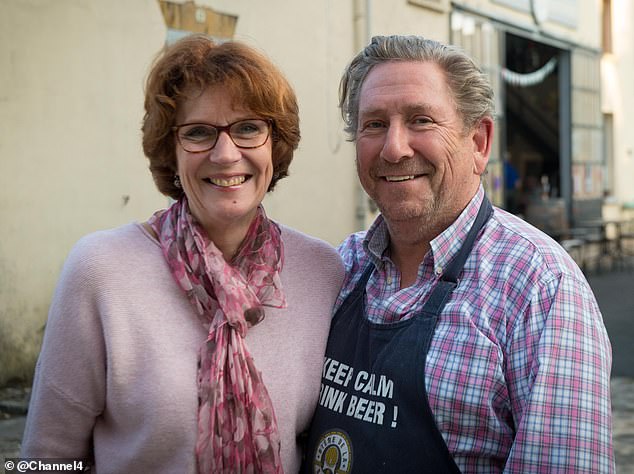 Due to the uncertainty in Britain, Hugh and Denise Davies, both 56, moved from Essex to Monpazier in France to open up three businesses – a brewery, shop, bar and gite

Elena, Scott and Louis, two, who were living in a small flat in Canary Wharf, moved to Loire Valley in France at the end of July 2017.

The couple, who had both worked in the Department of Health, realised they could get so much more for their money across the Channel.

While Brexit finally pushed them over the edge, they also wanted their son to grow up in the outdoors.

‘After Louis was born in February 2016, we had some hard thinking to do about whether to stay in London,’ explained Elena. 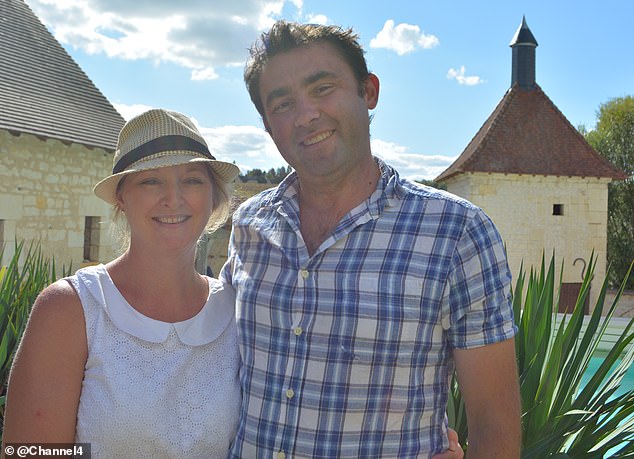 For Elena and Scott, the new destination they would call home was an easy decision – as he is not only half French but his parents had also retired to France some years before

‘The decision for us was between continuing the life we had or finding a new way of living where we could spend more time together as a family. You can have time or money, but not both, so we chose time.’

With Scott being half French and his parents having retired there, the destination was an easy choice. And after leaving their busy London lives behind, they have since opened a luxury gite.

‘We came to France knowing what we wanted to do and spent a year looking for the perfect property,’ said Elena. ‘We then stumbled upon La Barauderie and instantly fell in love with it.’

She added: ‘We offer luxury holiday homes in the loire valley, all beautifully furnished in keeping with the buildings’ history and with all mod cons.’

‘We have a salt water heated pool, children’s play area and trampoline, lake, orchards, vegetable plot and our chickens. So in terms of what we do, it’s cleaning, maintenance, gardening, plumbing, tree surgery and everything in between.’

And as for little Louis, he’s loving his new life in the sunshine, too.

‘Louis is loving the space he has to explore and be a cheeky toddler,’ said Elena. ‘We hope he’s enjoying all the time he gets with his mummy and papa. He started school last September, so is now learning both French and English.’ 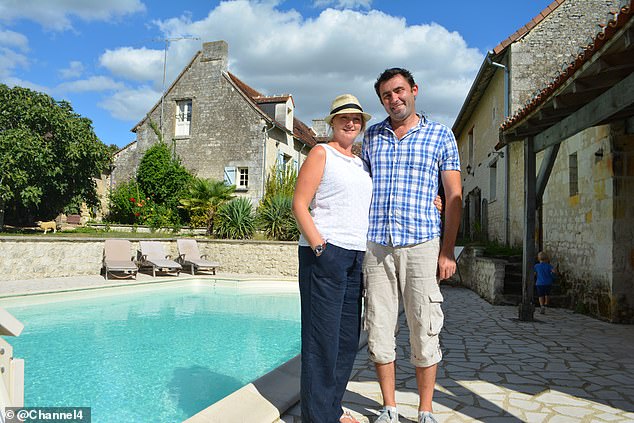 Speaking of their new gite business venture, Elena said: ‘We stumbled upon La Barauderie and instantly fell in love with it’

Hugh and Denise Davies, both 56

The former CEOs moved from Essex to a house in Monpazier, France, which they’d bought six years ago.

Hugh had wanted to retire at the age of 55 in their holiday home, but due to the uncertainty in Britain, they moved there for good this year and have now launched three businesses in the Dordogne – a brewery, shop, bar and gite.

‘Life in the UK was more about living to work whereas life in France is about working to live our lives to the full,’ explained Denise. ‘We had half decided to live in France before the Brexit vote.’

She continued: ‘The outcome of that vote was worrying initially, however fortunately Hugh has Irish ancestors so he’s taken Irish citizenship. But it’s our intention to get French citizenship in due course.’ 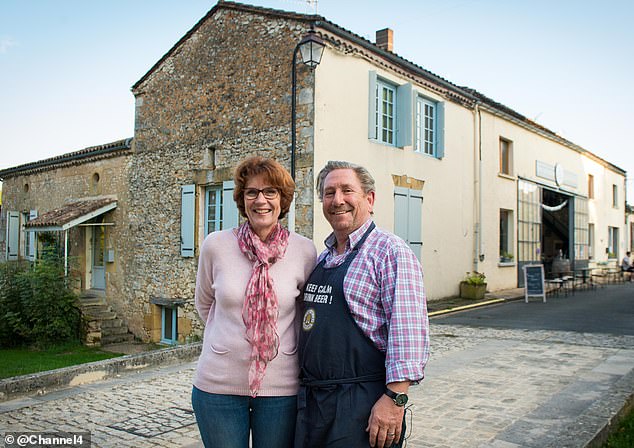 Hugh and Denise’s brewery is open seven days a week, while they plan to open theur luxury gite with hot tub in May

The brewery is based in Monpazier in the Dordogne and is open seven days a week, while the luxury gite with hot tub is based in nearby Beaumont and will be open in May. Their shop also sells gin, their beer, pasties and wine.

‘Hugh has established a micro brewery using traditional English methods to make both real ale and Belgian, French and American style beers,’ said Denise.’ We do tastings of the beers, tours of the brewery, and brew days plus we have a full licensed bar and a shop – both of which I run.’

She added: ‘The Gite sort of came about by accident. We saw a wonderful four bedroom town house and made a cheeky offer which was accepted, so we launched the gite at the same time which was a bit stressful.’

‘This winter has been relatively quiet however we’ve been brewing like crazy so that come Easter we can concentrate on our sales outlets. We’re already in several bars, restaurants, shops and a supermarket.’

Katherine a former solicitor and partner and Henry Walker, a contract manager for civil engineering firm, moved from Gloucestershire to France with their two children Daisy, 11 and Polly, 8 in June 2016.

After buying a rundown campsite in Chalandry, the couple converted it into a luxurious glampsite and haven’t looked back since.

‘We were both in stressful jobs that we didn’t enjoy which impacted on our family life,’ explained Katherine, speaking of their decision. ‘When we lost Henry’s Dad, we realised life was too short and made a spur of the moment decision to pack it all in and try to change our lives for the better. And as a result of Brexit, we rushed to complete the purchase.’ 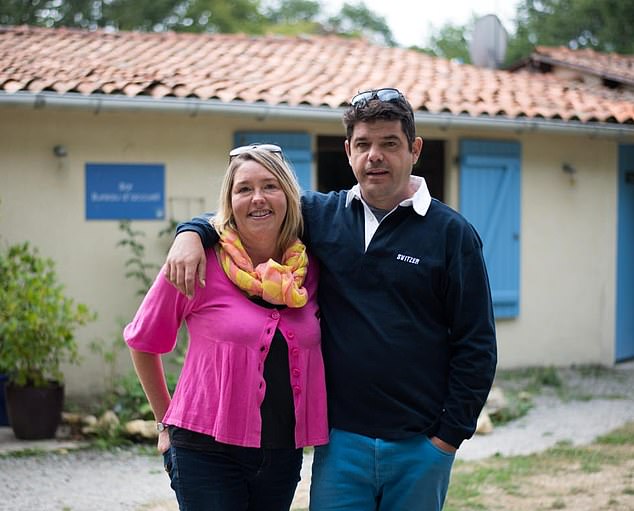 Speaking of their decision to move, Katherine explained: ‘We realised life was too short and made a spur of the moment decision to pack it all in and try to change our lives for the better’

The pair chose France as it wasn’t a million miles away from their family in the UK.

‘We really wanted a campsite as we both loved camping and had spent many happy childhood holidays camping in Europe,’ said Katherine. ‘We knew the turnover of this place would not support our family, so the natural progression was to install some higher earning accommodation.’

Now, the glampsite has gone from strength to strength and when the couple hear about what’s happening in Britain, they have no regrets of starting their new lives abroad.

‘We have no intention to return to the UK in the foreseeable future,’ explained Katherine. ‘We love the lifestyle and our two children are fully settled, with each loving school.’

Fed up of hearing about Brexit and having enjoyed many holidays in Spain, Michelle and partner Rob, who previously ran a successful commercial maintenance company, decided to say goodbye to Britain for good.

Despite uncertainty in Europe, they decided to move from Dorset to Galera, Andalusia in Spain in May 2018 and found two cave houses on the outskirts of the town.

‘Brexit was a factor but we were also keen for a change in lifestyle and the weather,’ explained Michelle. ‘We chose Spain because we wanted to live somewhere that was more rural.’ 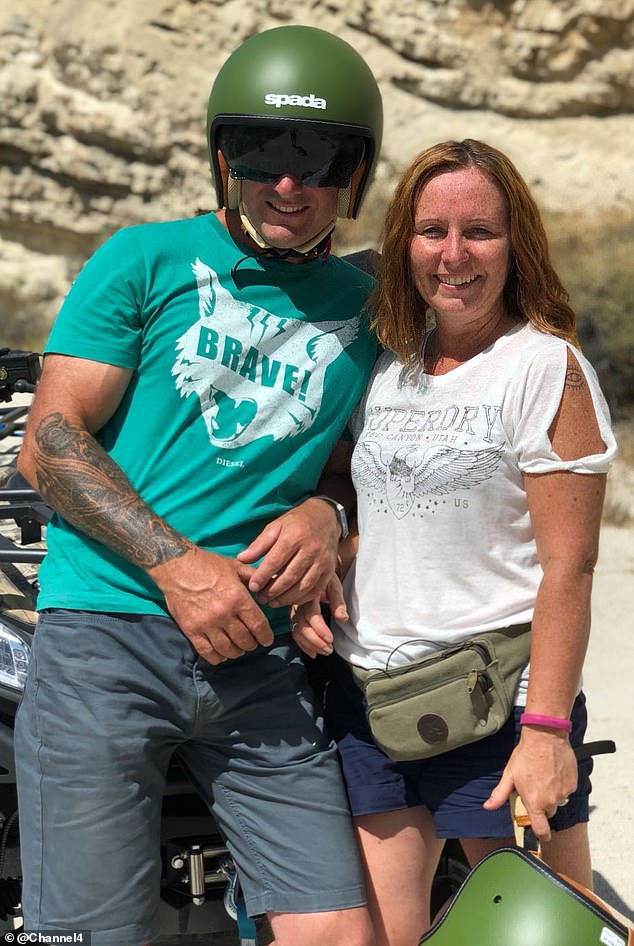 Discussing the hindrances they have encountered with setting up a business abroad, Michelle explained: ‘The language is difficult, but we are learning, and there is an English community here too which is great’

Deciding they wanted a lifestyle change, they turned their unique properties into a B&B business.

‘We have both travelled quite a lot, and have always thought we’d like to live and work abroad,’ said Michelle. ‘Rob isn’t so fond of the heat, and had heard about cave houses and how they are great for staying cool in the summer. We did some research and found the lovely village of Galera.’

She added: ‘We visited in Christmas 2017 and looked at several properties before deciding on the one we bought.’

After moving over in 2018, they renovated their properties, added a swimming pool and built a couple of yurts to begin a glamping site. 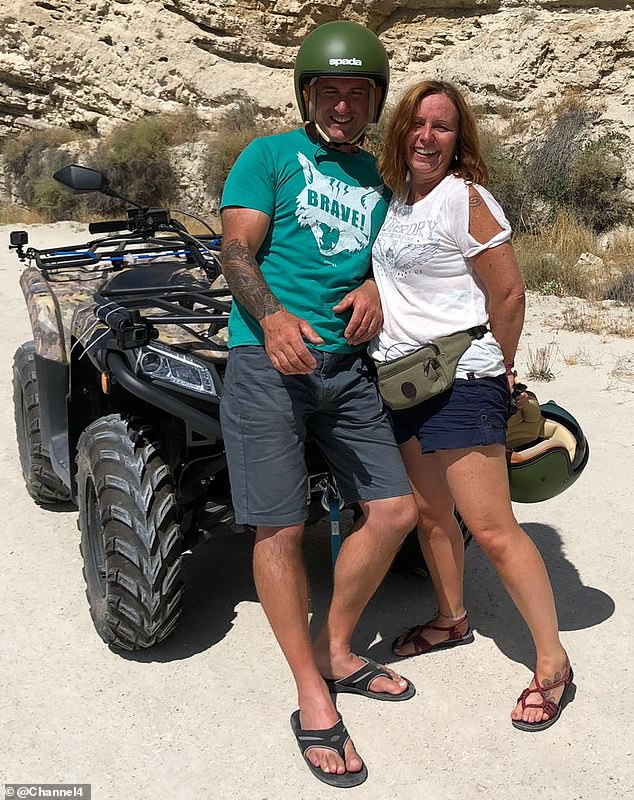 The ambitious couple hope the success of their business will allow them to travel and explore more of Spain. Michelle added: ‘We hope to be running it for several years before retiring’

‘We love the lifestyle, and the weather of course,’ said Michelle. ‘The language is difficult, but we’re learning, and there’s an English community here too which is great.’

In the long term, the ambitious couple hope to offer a full holiday experience including half board meal options and sporting activities including paddle-boarding, quad bikes, cycling and yoga.

‘We’re hoping the business is successful and will give us the opportunity to explore more of Spain in the low season,’ said Michelle. ‘We’re very excited at the prospect of having a business that we’ve built and that will benefit tourism in the area. We hope to be running it for several years before retiring.’

‘A New Life In The Sun’ series 4 starts tonight, Channel 4 at 4pm