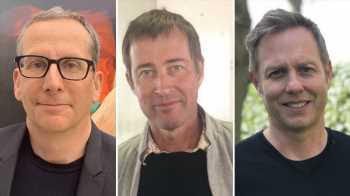 Media Musketeers plans an ambitious slate of up to eight high-end scripted series each year, forecasting an aggregate production spend of €1 billion ($1.1 billion) over the first five years. Janin said the company would be a “truly international venture, with local partnerships and presence in key markets.” The company already boasts a presence in the U.K., France (where Janin is based) and the Netherlands (where Docherty is based).

“As content remains king in driving user engagement and digital connectivity transforms the rules underpinning the media industry, we are keen to ensure that, in addition to delivering mass market entertainment, our production investments build customer relationships and provide meaningful insights on how best to tell stories and serve viewers,” said Law.

Law (pictured, left-right, with Janin and Docherty) worked at Warner Bros for the past 19 years since joining in 2000, most recently serving as senior vice president of digital strategy for Europe since 2014. He joins Janin and Docherty who worked together for many years at Apple’s iTunes, where Janin headed up the company’s international independent film business and managed the roll out of the iTunes film service in Europe and Latin America, before joining Wuaki.tv in 2015, and Docherty was responsible for launching and managing the iTunes international TV and movie
stores across Europe.

The new company expects to announce a slate of development projects as well as financial and third-party partnership deals in the coming months.