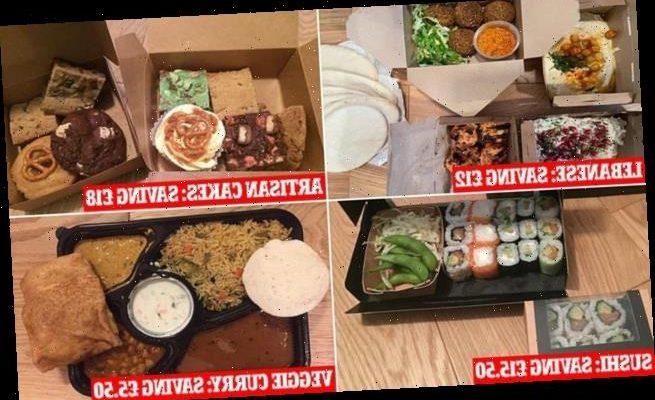 How to get up to 75% off lockdown takeaways AND save the planet! The food waste apps offering groceries, wine and restaurant food for a snip (just don’t be fussy about what you want to eat)

It doesn’t matter how long a chef has spent meticulously prepping a plate, or how regal the price tag is – if nobody buys it, it’s heading straight for the bin.

Food waste apps, a union of digital technology and frustration on the part of supermarkets, cafes and restaurants, claim to put an end to how much food – including alcohol, groceries and actual meals – ends up being discarded.

Enviromental campaign group Friends of the Earth says about a third of all food made for human consumption – around 10 million tonnes of food – isn’t actually eaten despite hours of labour, water and land use going into making it.

The last five years has seen food waste apps become increasingly popular with high street brands including Costa Coffee, Greggs and Pret a Manger getting on board with the likes of Too Good to Go and Karma, apps that are expanding quickly in the UK.

How does it work? Easy, consumers simply browse what’s been offered up, often with a just few hours notice, reserve and collect. You can expect to pay around £5 – £10 for a takeaway that might normally cost £15. A sourdough loaf might come with a 50% off tag, while a bottle of wine is likely to carry a lesser discount. 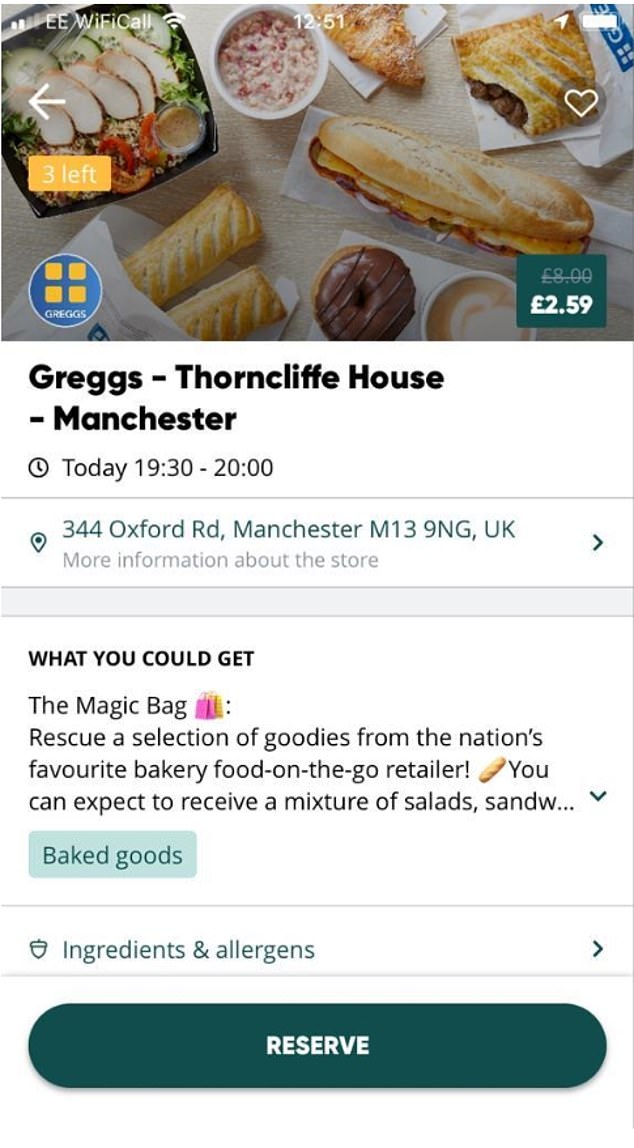 Rise of the food waste apps: Apps such as Karma and TooGoodtoGo put retailers – including the likes of Greggs, Waitrose and Costa Coffee – in touch with consumers to sell food with just a few hours’ left on its use by date…stopping food from going to waste 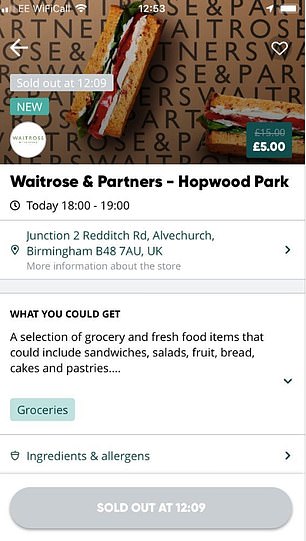 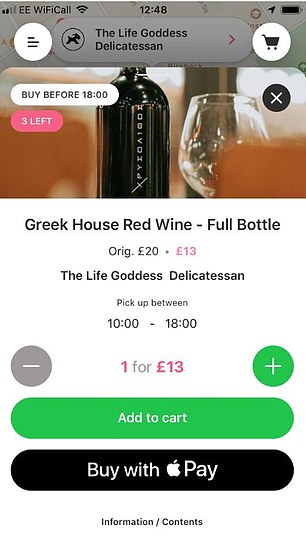 A Waitrose ‘magic bag’ promises £15 worth of food for a fiver at this Midlands store. Customers reserve and then collect…but have no guarantee what they’ll get. Right: a bottle of Greek wine with a £7 discount on Karma

Source: Friends of the Earth, Too Good to Go

Costa Coffee has been on board with Too Good to Go since 2018, and currently offers the app’s ‘magic bags’ – essentially a mixed selection of whatever goods haven’t sold by the end of the day – in 1,100 of its UK stores.

It isn’t just high street giants though, trendy brands including Farm Girl Cafe, Aubaine, Natoora, Ole and Steen and EL&N are all signed up with Karma.

A Costa Coffee spokesperson told FEMAIL: ‘We are committed to reducing food waste across our business and supporting the communities in which we operate in; from offering a 50 per cent discount on food during the last hour of trading that’s in date but can’t be sold the following day, to partnering with organisations such as Too Good To Go.’

While food waste apps are spreading their net wide, consumers options over what they can buy fare much better if they’re in a city. Karma is currently focused on central London and Brighton, while Toogoodtogo has wider reach but has still had little uptake in smaller towns.

Saving the planet and getting cheap food sounds like a win-win…but does what you get given in your mixed bag actually taste any good?

Over five days, FEMAIL ordered five dishes using food waste apps. One mishap aside, where we couldn’t find the kitchen offering up a bag of Spanish goodies, here’s how we got on: 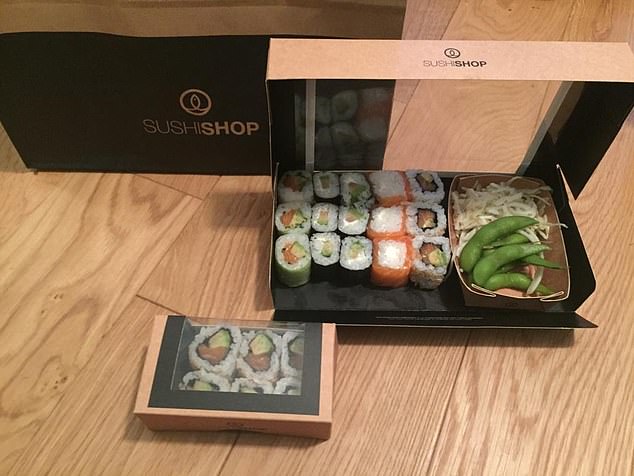 For just £4.50 upmarket sushi brand Sushi Shop served up 21 pieces of mixed sushi and a side salad – although there was no wasabi or pickles included

We picked two boxes up at just after 4pm after being alerted there were at least nine boxes of sushi left at this upmarket Japanese store. All packed and ready to go when we arrived, the boxes didn’t include pickles or wasabi… but we did get chopsticks.

An absolute bargain of a meal for just £4.50 per person, we feasted on everything from tuna avocado rolls to cheese salmon makis – which normally retail at £6.90 for six. I’ll admit I had no clue what exactly some of the makis and rolls contained but that was part of the fun – would definitely order again. 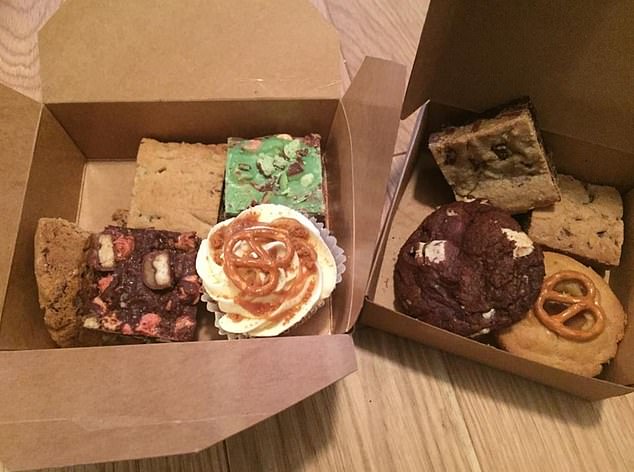 Mint Aero brownie? Shinasis Kitchen, a small-scale artisan baker served up a deluxe bag of her bakes for just £6 30 minutes before the end of the farmer’s market where they were being sold for full price – around £24 for the haul pictured

Easily one of the most delicious of the bargains we picked up, this artisan bakery at a London farmer’s market offered up nine cakes in a deluxe £6 ‘magic bag’.

The biggest clue we were hitting the baking jackpot was a queue of other people lining up to collect similar boxes of discount treats.

The real joy though was getting the treats home. We opened up the recyclable boxes to find Kinder Egg blondies, Mint Aero, salted caramel and Rocky Road brownies and salted caramel and Biscoff cup cakes. The baker looked more than happy that her cakes were being rescued from the farmer’s market dustbins too. 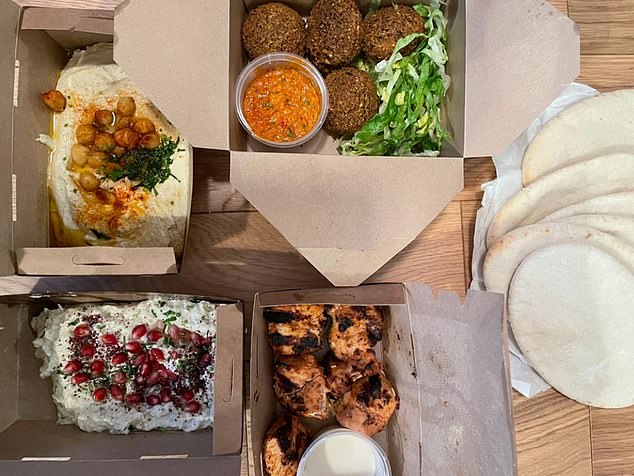 Around £7 each bought six pitta bread, four falafels and six pieces of chargrilled chicken with dips plus a mountain of hummous and smoky aubergine dip baba ganoush from Lebanese food truck Lil Watan

A Lebanese feast for less than half the price; we came away from this food truck laden with six pitta bread, four falafels and six pieces of chargrilled chicken with dips plus a mountain of hummous and smoky aubergine dip baba ganoush.

Again, we swooped during the last 30 minutes of a food market – ensuring the dishes were as fresh as they would have been for anyone purchasing that day and the chicken was still warm when we got it home. Everything came in cardboard boxes so there was zero waste for the planet too. 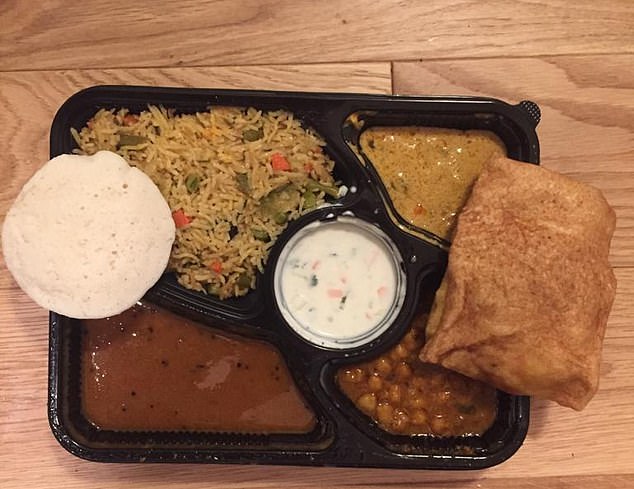 A high-street takeaway offered great value for money with a veggie curry platter for a fiver. The downside, it was a trek to collect…

An independent vegetarian curry house offered up a stuffed dosa, veggie korma, chana masala (chick pea curry) and a vegetable rice amongst other delights including an idly – a South Indian rice cake – in a meal platter for a fiver.

Picking it up for an early dinner at 6pm, it didn’t feel like food waste at all although it was probably left over from lunch. The only downside? It was a trek to pick it up on a particularly freezing night – food waste apps are collection only and, if you’ve grown used to Deliveroo and UberEats, then it can feel like an almighty effort for a £6 dinner. 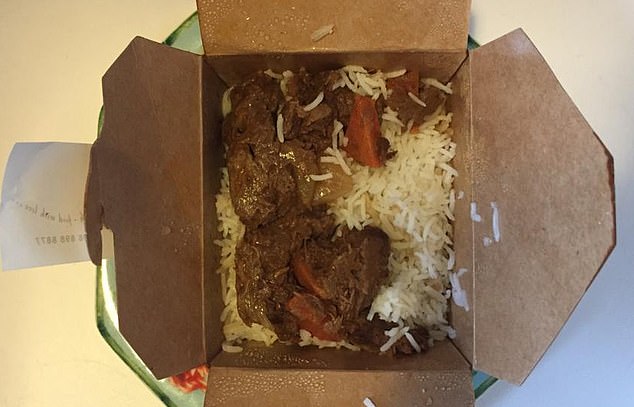 A complete surprise but this steaming hot bowl of beef bourguignon offered a hearty lunch for just £2.50

This particular magic bag came from a South West London caterers called Heavenly Dish. There was no restaurant, just a friendly face and a box of super-tender beef bourguignon served on a bed of fluffy rice.

It was really tasty and an absolute bargain for £2.50 – again, it was a little tricky to get to, and parking wasn’t easy so a quick dash was required.

As a normal lunchtime consumer, you wouldn’t be able to order lunch for one here but because they’re signed up to TooGoodtoGo, the kind of bowl food they serve at catered events or for wider contracts is more easily available.