Unused medals left over from former prime minister Tony Abbott's doomed re-introduction of knights and dames have cost the taxpayer about $135,000 after their value was written off years after the abolition of those ranks.

Mr Abbott reintroduced the ranks in 2014 and awarded five, with the last going to the Queen's husband, Prince Philip. 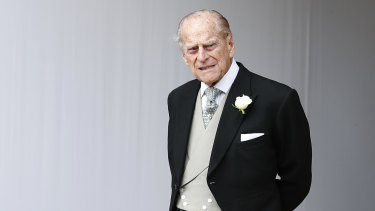 Prince Philip was one of three people awarded an Australian knighthood when they were briefly available under the Abbott government.Credit:AP

In a Senate estimates hearing on Monday the Governor-General's office revealed there were at least five leftover medals worth about $135,000 in total that were created before Malcolm Turnbull abolished the "anachronistic" titles when he came to power in 2015.

Four are waist badges, worth about $20,000 each. One is a slightly cheaper medal worn around the neck, worth about $15,000. Combined, the medals would be enough for two or three dames or knights, the Governor-General's secretary Paul Singer said under questioning from Labor Senator Tim Ayres.

In contrast to honours like the titles of member or companion of the Order of Australia, Mr Abbott's knights and dames were given multiple insignia.

"I'm flabbergasted that they cost so much," Senator Ayres said. "I think they should go into the Museum of Australian Democracy down the road here [from Parliament House] as part of an exhibition on folly in government decision making".

He said the cost of the knights and dames medals was exorbitant. "I'm sure the Emergency Services Medals they are going to hand out won't cost this much," Senator Ayres said.

While the medals have been written off in the Governor-General's accounts because there will be no future knights and dames awarded, the medals are still held by his office.

Along with Prince Philip, the other people awarded knights and dames were Quentin Bryce and Peter Cosgrove, former governors-general; Angus Houston, a former chief of the Australian Defence Force and Marie Bashir, a former governor of New South Wales.

Tony Abbott said the titles of dame and sir would be an "important grace note in our national life" and recognise people whose significant contributions to the public meant they could never fully return to private life.

The decision by the Office of the Official Secretary to the Governor-General to write down the value of the medals was originally recorded only in a small note on page 78 of its annual report.

"Knights and dames are titles that are really anachronistic, out of date, [and] not appropriate in 2015 in Australia," Mr Turnbull said when he abolished the ranks.