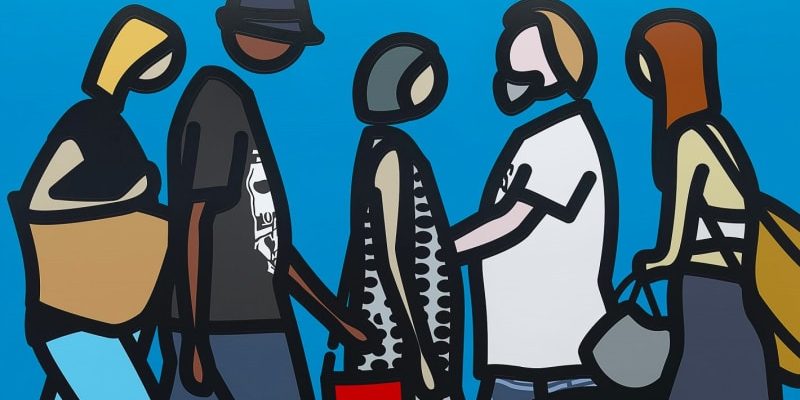 There are all sorts of magic tricks and techniques to make art, says Julian Opie; at least, to make the kind of art that interests him. We're in the top floor of his studio workshop in London, looking at a few of his treasures: a 19th-century silhouette portrait cut from black paper; a tapestry version of a Chuck Close neo-realist portrait; a spearhead chipped by a Homo erectus roughly a million years ago.

"I've always been interested in processes and materials," he says. "This is reality. In order to get away from that you need some kind of trick, some kind of technology as a way of stepping back from the smelly stuff in front of us and stepping into a parallel world of language and interpretation." 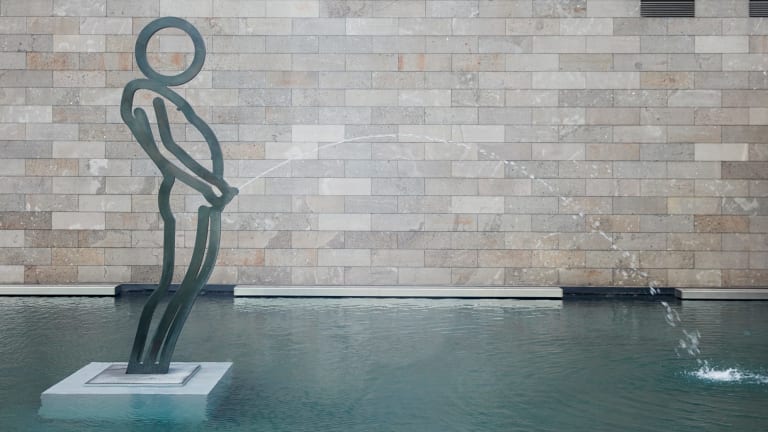 As a child in Oxford, where his father lectured in economics, Opie was the kid who could draw; by the time he was in his early teens, he was coming home from school every night to paint. Making something with his own hands, however, soon became an irrelevance.

At London's innovative Goldsmiths art college in the late '70s – a decade before Damien Hirst, Tracey Emin et al – he acquired tools to make models and cut-outs: a band saw, a drill, welding equipment, film cameras. "Which is immediately getting away from ripping something up with your fingers," he says. "Once you use a band saw you introduce an element of mathematical precision that in a way is magical." 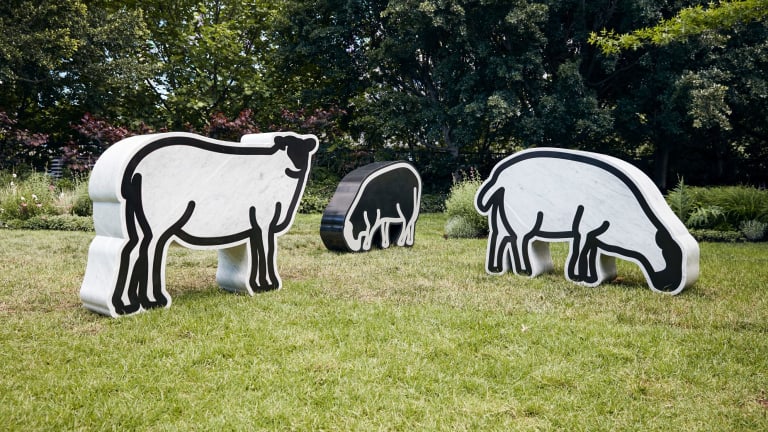 The holy grail appeared to him in the early '80s. There he was in Tottenham Court Road, where Londoners go to buy electrical goods. "And I saw a bunch of what looked to me at the time like TVs, all with the same screen saver. I just couldn't believe what I was seeing," he says.

"It was like seeing myself, my art, the art that I loved, suddenly existing in all of these shop windows. Some of those early computer games where you could three-dimensionally go through a maze-like place – that was what I had been trying to build and draw. And here was a machine that was able to create that!" Once he bought his own computer, he realised he could print anything he wanted.

There are plenty of computers here, of course; the studio buzzes with the collective labour and electronic application of some 14 people. Opie's brand is a huge success, with works held by New York's MoMA and London's Tate, numerous public commissions across the world and a lucrative line in commissioned portraits that make everyone look like a Tintin character: heavily outlined in black, features reduced to button eyes and two lines for a mouth, a couple of flat colours denoting skin and clothing. The most famous of these was the DVD cover he designed for Blur's The Best of album in 2000, with its four portraits of the band members. That perfect match of image with sound propelled him into the spotlight of popular culture.

That was clearly fine with him. He does works for shopfronts and window displays, while being careful not to let his work be seen as advertising; he sells online merchandise. "I don't have a hierarchy," he says. On his studio floor right now is some of the merch sent for approval by the National Gallery of Victoria, where a large retrospective of his work opens this week. 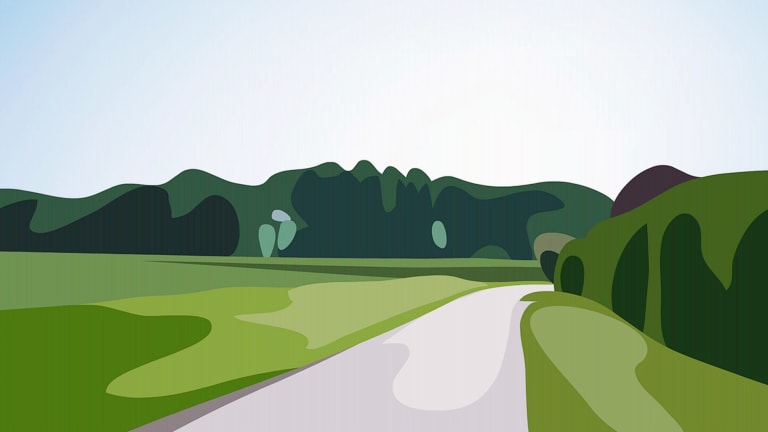 At his instigation, works will start at the edge of the gallery moat with LED screens showing some of his walking figures and finish somewhere in the courtyard, where model crows will peck at the ground; there will be cut-out fish swimming in the water wall; there will be activities for children or, as the NGV likes to say, kids.

"I don't like that word, but I lost that battle," he says, wincing. So he's a bit stuffy then? He laughs. Yes, he is. 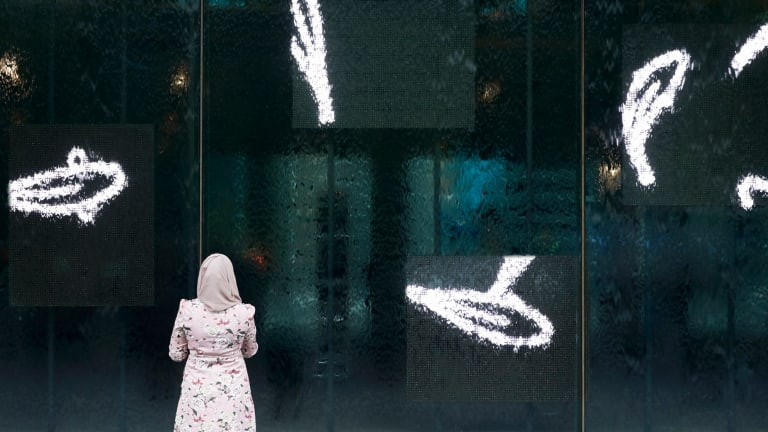 A visitor watches fish swimming at the waterwall entrance to NGV International.Credit:Tom Ross/NGV

A couple of large canvases that are part of the walking series – he applies his favourite themes to multiple media, giving them up as he tires of them and circling back to them years later – are leaning on the wall. Stripped-back images of faceless figures, each pulled into focus with that characteristic black outline and perhaps a distinguishing feature, such as a tattoo, pass by in profile. Some carry coffee. More look at their phones.

These condensed images start life as photographs, always taken unawares and from the same square angle. "Whatever size they were, whatever they were wearing gets bounced straight from the street into the picture." 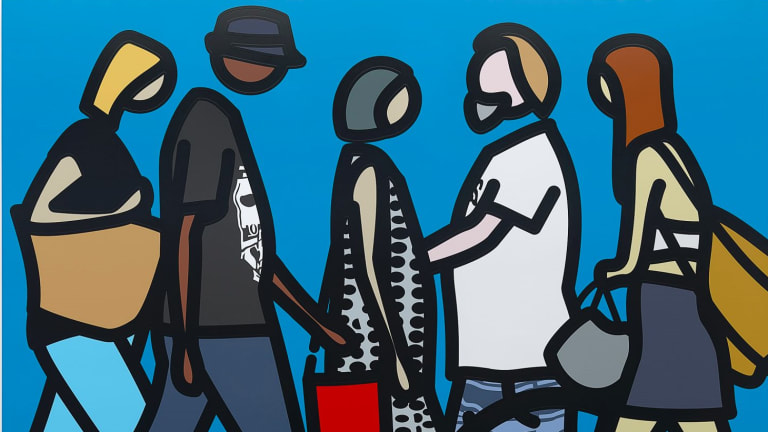 Opie traces, changes and simplifies them on screen and the resulting shapes are cut from shiny sheet plastic with a computer-guided knife. This glossy plastic is a material more commonly used on shop signage, he says, which he believes influences our response to it. Specifically, it feels "slightly fun", at least if you like shopping.

So he only works from photographs? He bridles slightly. "I don't see it that way. I work from reality. I often use digital photography to gather information, but I see it more like a mirror; really, what I'm doing is drawing over a reflection of an image that was there." 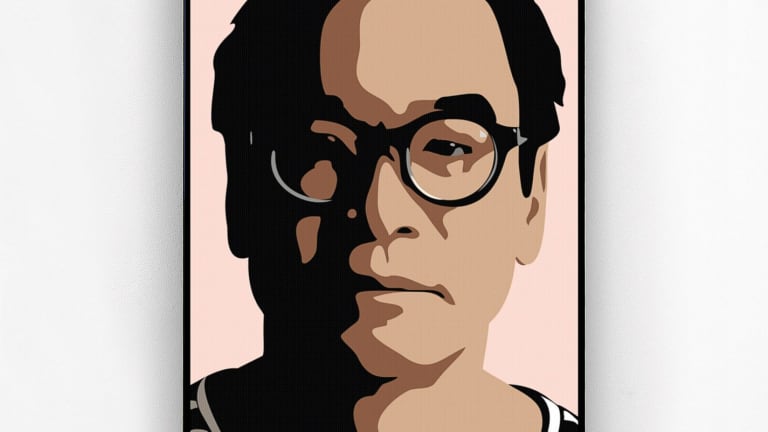 In the process, he believes he comes closer to how we actually see the world; a huge photograph of a group of people would be both more detailed and less differentiated than the same group glimpsed in real life.

"Then they would just be a bunch of people like anybody. You could take a thousand pictures like that. I have. Whereas I think by carefully focusing on the people and editing down what I think is telling about them in the way that I draw, they become more characterful." 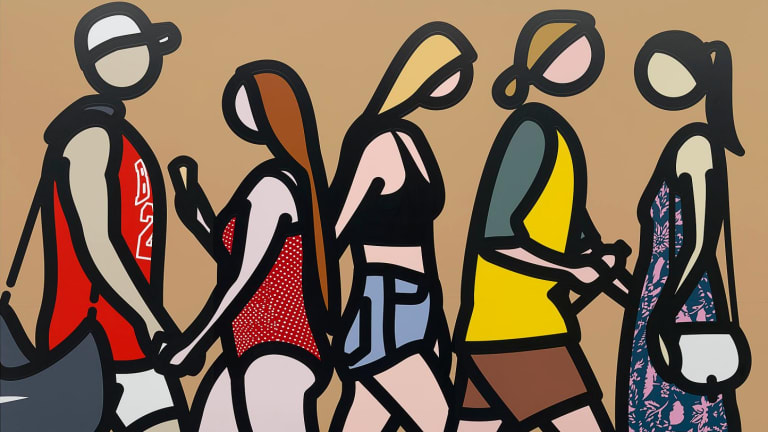 Opie's critics often say his work is bland. It is certainly commercial: "groovy but establishment", in the words of one British newspaper. Sitting surrounded by his Egyptian frieze images, his Warhol Brillo multiple and Dutch floral paintings, there is a sense of heritage: this is a studio in the medieval tradition.

"It feels that way to me," Opie agrees. "Most of what I have around me is other people's art because I find that both inspiring in the sense of giving me ideas, but also reassuring. Other people have struggled with, battled and found solutions for the same kinds of questions." 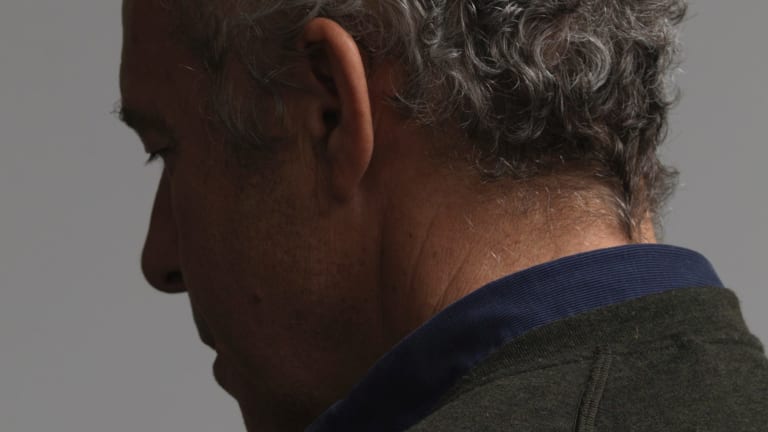 Humans have always drawn what they see. "In the larger sense of the word 'draw'. It seems to be very intrinsic to their relationship with the world … to imagine it as well as live in it." He runs his finger along the spearhead. Homo erectus is not supposed to have made art, but so many of these tools have been found that it is now thought they might have been decorative. "That edge," Opie says. "Suddenly, that's culture."

Julian Opie is at NGV International, November 9 until February 17, 2019.