Only commercial properties will be acquired to build the long-awaited Melbourne Airport Rail link, the Andrews government has said, after it released the first images of a new bridge, set to become the second-highest in Victoria after the West Gate, it intends to build over the Maribyrnong. 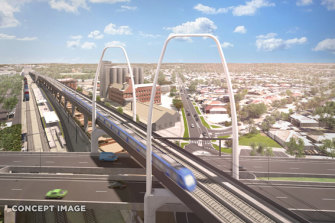 “This [bridge] is a big part of the project … and I think it’s fair to say both levels of government are very keen to get into the delivery phase of this project as we finalise the planning and design work,” Ms Allan said at Treasury Gardens.

The final cost of the project is yet to be finalised, and the business case has not been completed, but the Andrews and Morrison governments have committed $5 billion each. Ms Allan said she expected the Melbourne Airport Rail link to cost between $8 billion and $13 billion.

Evan Tattersall, chief executive of Rail Projects Victoria, said while residential properties will not be acquired to build a rail line, a number of commercial properties would need to be razed. 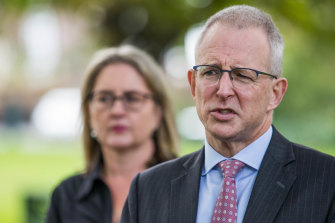 “There won’t be any residential properties compulsorily acquired,” Mr Tattersall said. “There will be some commercial properties. The majority of those have known for many years the potential for the acquisition because there’s been a public acquisition overlay in place for quite some time.”

That overlay was put in place following a 2001 decision – later abandoned by state Labor – to build an airport rail line through the same corridor selected two decades ago.

“We’ve still got development work to do yet,” Mr Tattersall said.

A rail line to Tullamarine has been on Victoria’s infrastructure agenda since the mid-1960s but has never been delivered. 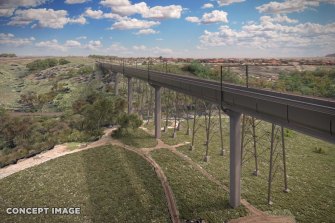 The rail bridge will be the second highest behind the West Gate. Credit:Rail Projects Victoria

The original plan was for the track to run via Broadmeadows, rather than the more circuitous journey through Sunshine, but with far more housing along the Broadmeadows corridor to be potentially affected by a new express airport rail line, the 2001 state government planning panel recommended the new route via Sunshine.

“A global city like Melbourne, with a major airport like Tullamarine, needs a world-class rail connection between the city and the airport,” Mr Fletcher said on Monday.

“A lot of work has been going on since the Prime Minister and the Premier late last year announced the agreement on the route that would be used and the overall design parameters. And this is going to be a very, very important project.”

The trains will run through the Metro Tunnel, with construction on the rail link expected to begin next year and be completed by 2029, subject to relevant state and federal planning and environmental approvals processes.

The location of the station at Tullamarine is yet to be finalised. Mr Tattersall said his department was working with Melbourne Airport to determine the most appropriate location.

“What was required with the airport rail was brand new capacity from Southern Cross [station] to the airport that was fast. I don’t think the community ever wanted a slow train, a suburban train, a train that didn’t offer the additional capacity that was needed.”

Our Morning Edition newsletter is a curated guide to the most important and interesting stories, analysis and insights. Sign up here.