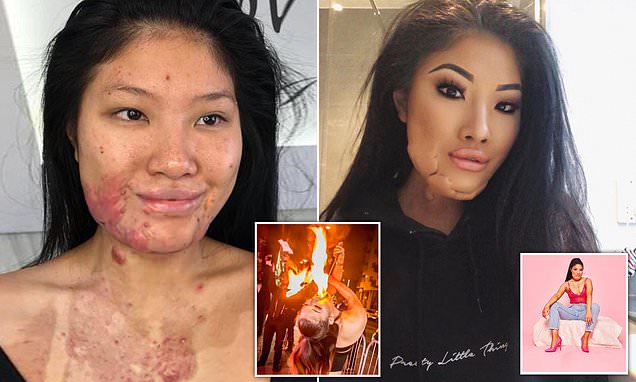 Fire breather, 23, who suffered severe facial burns following a freak accident stars in her first modelling campaign to help ‘eliminate hate’ after trolls told her she ‘deserved it’

A model and dancer who was involved in a freak fire-breathing accident which left her scarred for life has starred in her first modelling campaign since the terrifying ordeal.

Fire-breather Sophie Lee, 23, from Manchester, was on stage at a charity event in Chicago when the life-changing incident took place on April Fool’s Day in 2018.

The influencer, who has 39.6k followers on Instagram, features in the new and powerful ‘eliminate girl hate’ campaign launched by footwear brand EGO in time for International Women’s Day on 8 March.

She appears alongside Lala Andrew – both of whom have experienced hate online due to physical or mental health issues.

‘I have been a victim of both online and offline trolling, from girls in particular, and it has had a real impact on my confidence,’ Sophie told Femail.

‘Since my accident, I’ve finally accepted myself and it’s made me look at the bigger picture. I want to use my social media platforms to inspire young girls not bring them down.’ 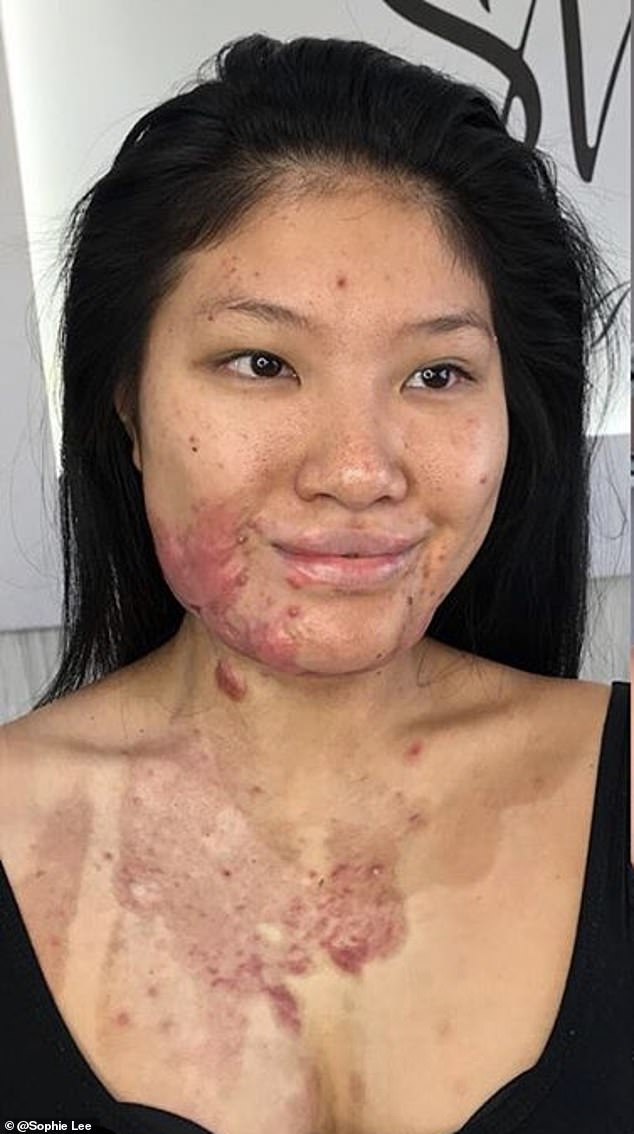 Fire-breather Sophie Lee, 23, from Manchester, was involved in a freak fire dancing accident which left her with scarring for life 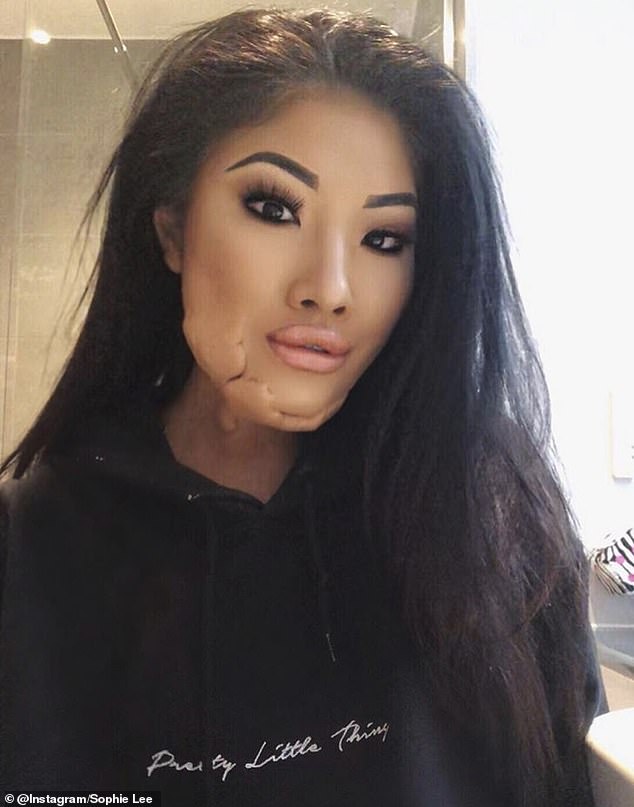 Almost one year on, she has plucked up the courage to star in her first modelling campaign to help eradicate online bullying 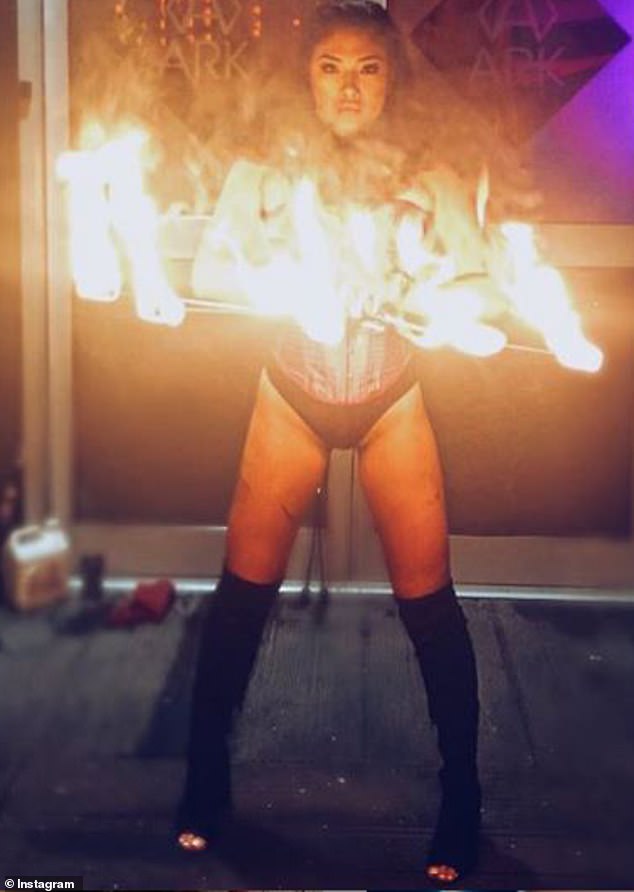 Describing the moment she realised she was on fire, Sophie said: ‘As I blew it out, I opened my eyes and saw fire everywhere. It was must have been from a blow back of wind. It was a freak accident’ 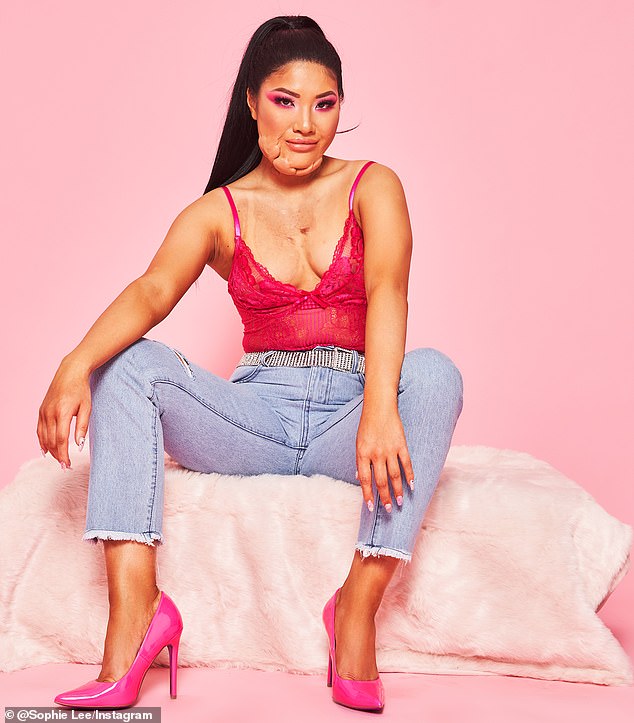 She added: ‘I firmly believe that beauty is skin deep and I hope that this campaign propels a positive movement amongst young people.’

Following the horrifying incident and after suffering facial burns, Sophie was devastated when she started to receive hate online.

‘I’ve received lots of comments like, “if you play with fire what do you expect?” or “you deserve to get burnt” she revealed. ‘Others have messaged saying “what happened to her face?”‘

‘Mostly I ignore it. Trolls want me to send hate back and show a horrible side to me but I’m not like that. They’re trying to push my buttons and make me down about things that should be an insecurity of mine, when they’re actually not.’ 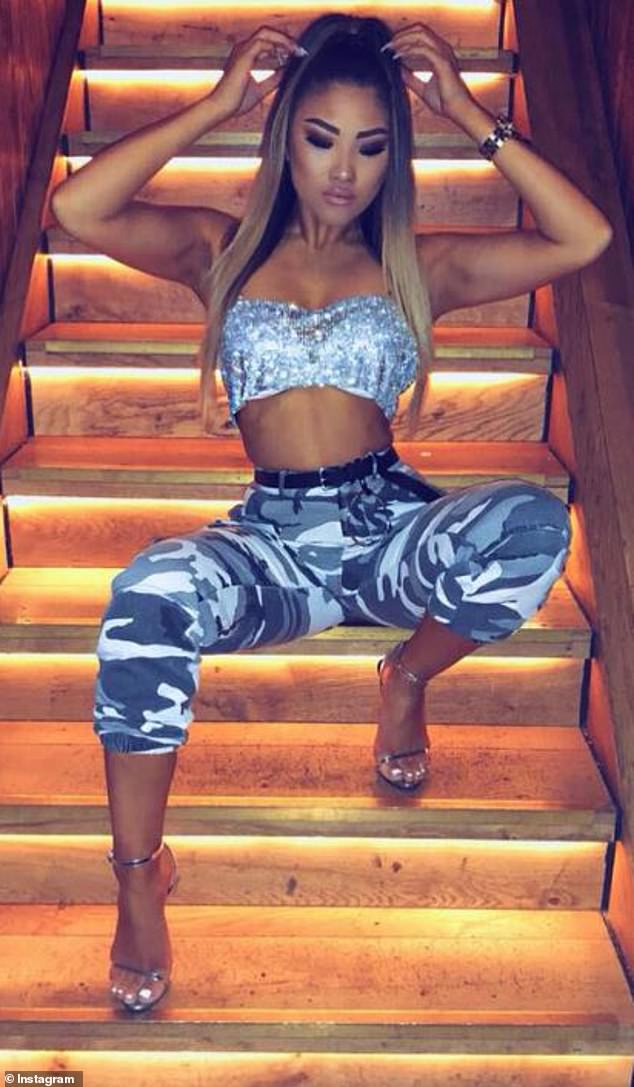 Before the accident (above) Sophie thought she had achieved everything she’d always wanted. Only after did she really appreciate the life she had 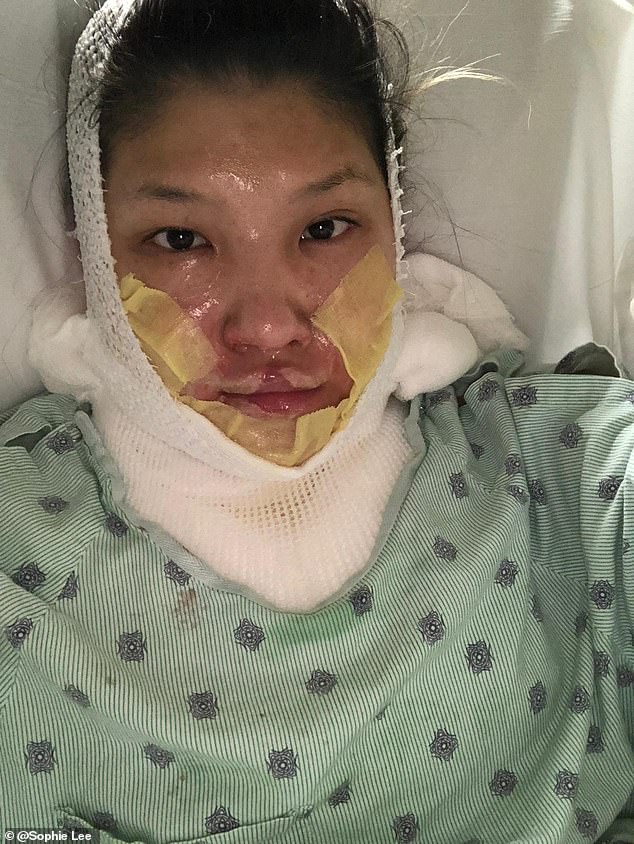 Sophie was in hospital for just under a month and during that time, was too traumatised to look in the mirror

Not wanting her body to go through any more trauma, Sophie turned down a skin graft and instead opted for a strong cream which helped her scars to heel 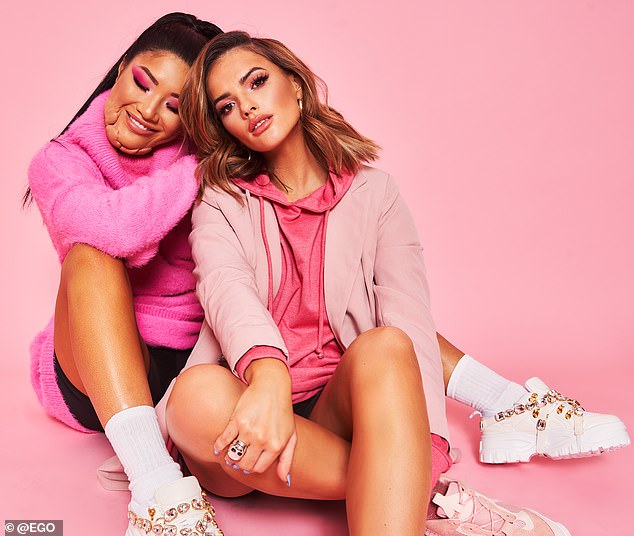 Sophie stars alongside Lala Andrew in the new and powerful campaign. Both have experienced girl hate online due to physical and mental issues

After going through such a traumatic event, Sophie explained that she no longer experiences ‘pain’ as she’s been through it all.’ Above, the model pictured following the freak fire accident

Back in April, Sophie was on stage and about to reach the finale of her fire-breathing performance when she realised something was drastically wrong.

‘Obviously fire to me was second nature,’ she explained. ‘In anything you do there’s always a risk but you never think it’s going to change your life.’

‘I was confident I was ready but as I breathed the fire out and opened my eyes, there was fire everywhere. It must have been from a blow back of wind. It was a freak accident.’

But it was only after running off stage that she realised the fire was spreading over her body – and fast. 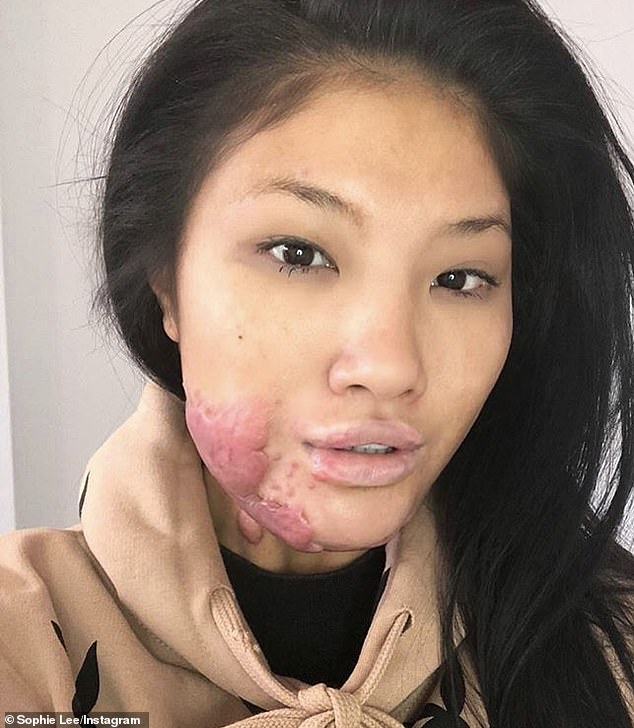 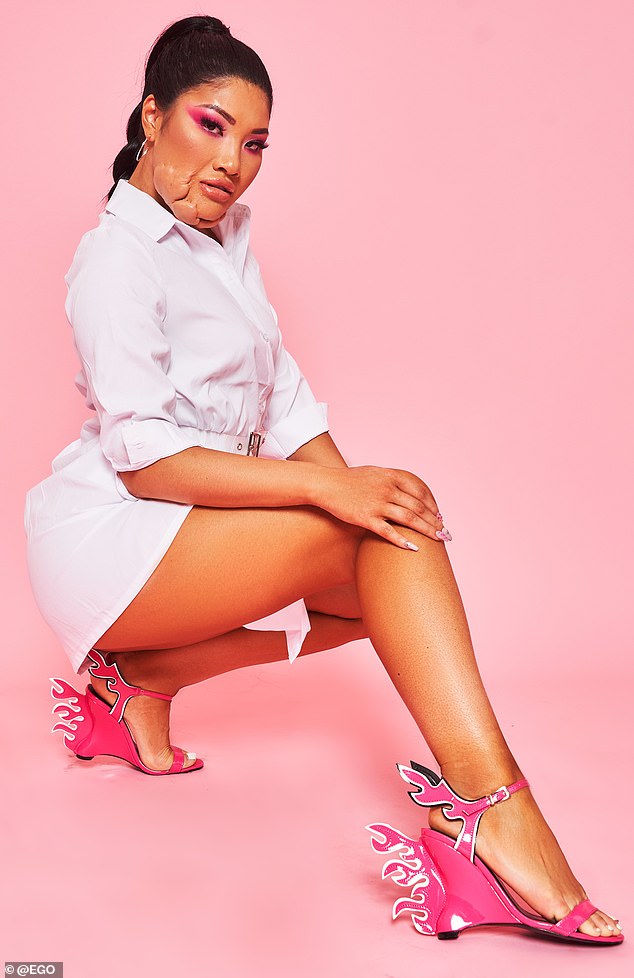 Following her first photo shoot since the freak accident, Sophie said she felt ‘liberated’ and empowered

‘I ran backstage got a damp towel and put the fire out but I didn’t realise the extent of my burns,’ she explained. ‘I was probably on fire for a good minute. I went straight to intensive care.’ 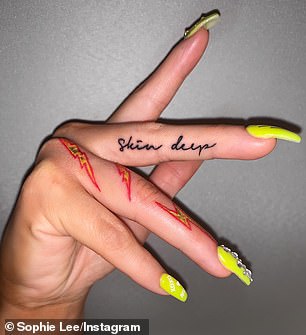 The influencer has joined the campaign in the hope of helping others realise that beauty is ‘skin’ deep. She even got the message tattooed on her finger (above)

In total, Sophie was in hospital for just under a month and during that time, was too traumatised to look in the mirror.

‘I was so distraught and I thought it was the end of my career,’ she said.

‘I thought it was the end of everything I’d worked for and wanted to achieve.’

‘All of a sudden everything came crashing down. The doctors told I was extremely lucky to be alive.’

Not wanting to put her body through any more trauma, Sophie declined the offer of a skin graft.

‘I was so swollen I couldn’t see or breathe so I had to wait until my body was strong enough to do that before doctors could access what procedures I could have,’ she explained.

‘Initially they wanted to do skin grafts but as it would be causing another injury to my body, I didn’t want to go through that again. So I opted for a strong cream which helped my skin to heal.’ 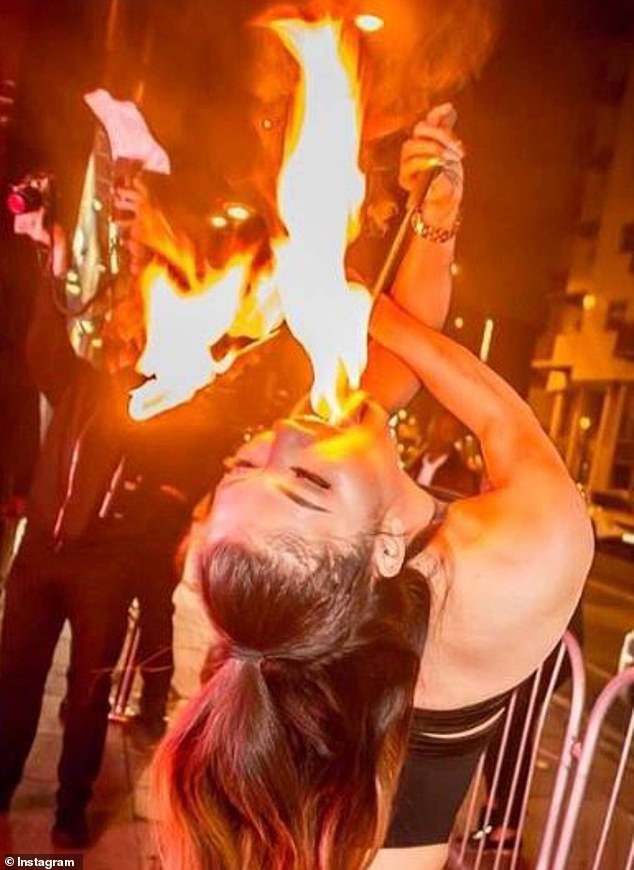 Sophie has received cruel comments online from people saying that due to her choice of career, she ‘deserved’ to get burnt 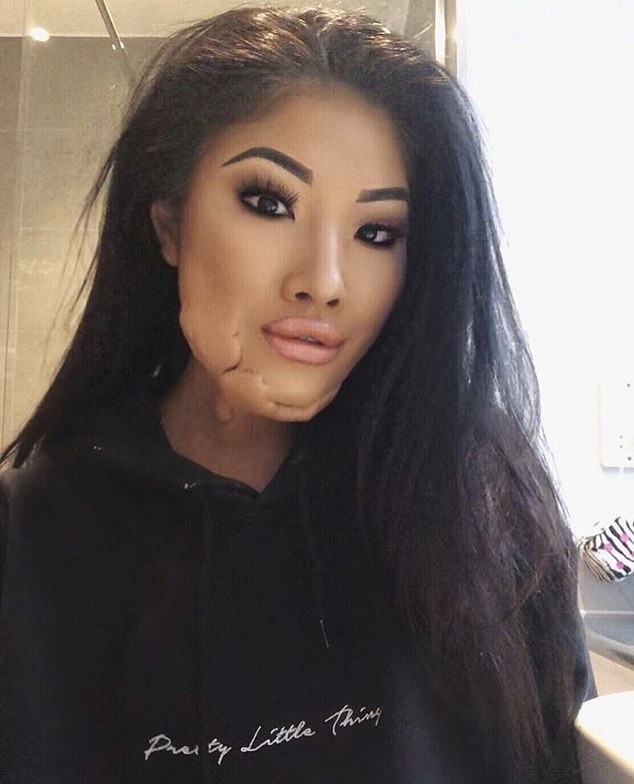 While it seemed to heel her injuries at first, by July, the former fire breather had started to develop raised lumps on her face which turned out to be keloid scars – a form of benign tumour.

‘It’s really painful,’ she explained. ‘The veins inside the scar are like sharp stabbing pains. I’m due to have surgery soon that will eventually freeze it off.’

Now, it’s been almost a a year since that near-fatal day.

Despite rejecting various modelling offers since, Sophie plucked up the courage to star in the EGO campaign as the message meant so much to her.

The campaign aims to be supportive of each other and eliminate girl hate using a unified hashtag #eGOGIRL.

Describing getting behind the camera for the first time since as a daunting experience, she said:

‘I had three hours sleep. It gave me such anxiety. I was really nervous because it’s the first time I’ve shown me at every angle.’

‘But after seeing the photos, I felt so empowered and liberated. It makes me truly feel like I’ve found myself as a woman.’

Pictured, Sophie starred in the campaign alongside La La – whose story she said has inspired her. ‘When La La told me her story I thought she was amazed,’ she revealed. ‘I want people to know that you can go through anything in life and it’s not about what happened to you, it’s about how you come out from that’ 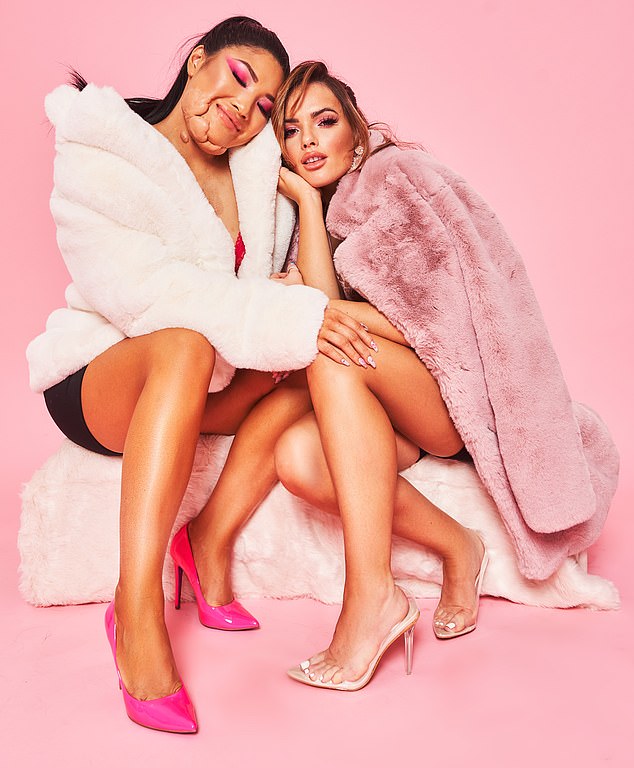 She continued: ‘In this day and age suicide rates are going up, depression, anxiety and body dysmorphia is going up because we judge ourselves on another lifestyle that’s not ours.

‘We should just be thankful for ourselves and everything we do have. The campaign is a great message and I’m so proud and honoured to be a part of this for International Women’s Day.’

And despite what she has gone through, Sophie is also inspired by La La, who joined her on the inspiring shoot.

What are keloid scars?

– But some scars don’t stop growing, invading healthy skin and becoming bigger than the original wound, which are known as keloid scars

– They affect around 10-15% of all wounds and are more common on the upper chest, shoulders, head and neck

– They can last for years, and sometimes don’t form until months or years after the initial injury

– Some can cause pain, tenderness, itchiness, a burning feeling or limited movement if located on a joint

‘People have always asked me how I get through it but when it comes to other people who have experienced trauma I think the same about them,’ she said.

‘When La La told me her story I thought she was amazing. I want people to know that you can go through anything in life and it’s not about what happened to you, it’s about how you come out from that.’

‘You can still go out there and achieve anything you want to achieve. Now, nothing will ever faze me.’

She added: ‘It’s made me rethink the way I want to live and be the person I want to be. I don’t want to be someone that’s besotted by myself. I want to be a person that can help people. If it means putting myself out there then that’s what I’m going to do.’