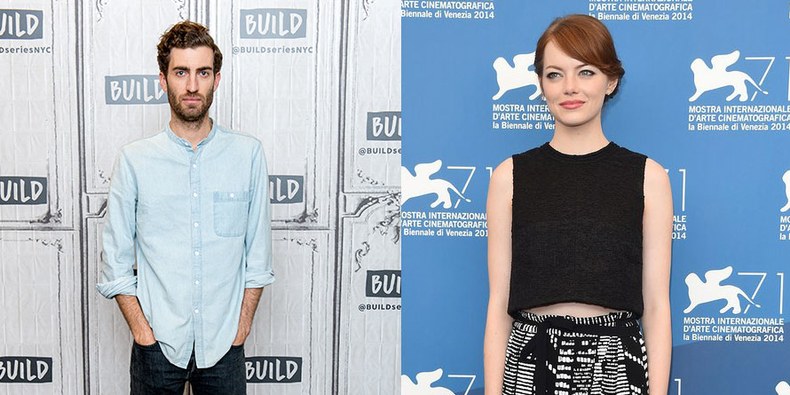 The last year or so has brought with it the rise of the celebrity-with-Saturday Night Live star romance. Though we've had to say goodbye in recent months to two of the most high-profile of these pairings—looking at you, Ben Affleck and Lindsay Shookus, and Ariana Grande and Pete Davidson—Us Weekly confirmed this week that Emma Stone and Dave McCary's own Hollywood-SNL crossover is still going strong, despite the fact that they haven't been spotted together in nearly a year.

The update came courtesy of Stone's holiday party, which she reportedly co-hosted with the sisters of Haim at World on Wheels roller rink in Los Angeles on Wednesday. She and McCary were "attached at the hip" throughout the festive fête, according to an Us Weekly source. "They stood right next to the stage in their skates for all of Haim's set, dancing together and singing along," the witness said. "At one point, they slow-danced to a somewhat upbeat song. He initiated it and she excitedly followed."

Stone was "smiling and giddy" while slow-dancing with McCary, and afterward, "they faced the stage with Emma's back pressed against him, and his arms were wrapped around her," per the source. Later, Stone reportedly reconvened with McCary in a corner of the venue, where she "whispered in his ear and rubbed his back." According to the onlooker, they "looked super close" as they sang along to the party's '70s-inspired playlist.

The Oscar winner and SNL segment director were first linked in the summer of 2017, when they attended the premiere of McCary's film Brigsby Bear together, several months after presumably meeting when Stone hosted SNL in late 2016. In subsequent months, they were seen spending time together around New York City, embarking on dinner dates and showing up together at the sketch show's infamous late-night afterparties. The last time they attended any such party together, though, was in February; since then, Stone has been rumored to be dating, alternately, Maniac costar Justin Theroux and ex Andrew Garfield, both of which now seem to be nothing but wild speculation.

Whatever Stone's relationship status, she recently spoke to close friend Jennifer Lawrence in the September issue of Elle about suddenly feeling ready to settle down and start a family. "My perspective about kids has changed as I've gotten older. I never babysat or anything. As a teenager, I was like, 'I'm never getting married, I'm never having kids.' And then I got older and I was like, 'I really want to get married, I really want to have kids,'" Stone said. "It's the turning-30 thing, where you're like, I'm not that young. I'm young, but I'm not that young."