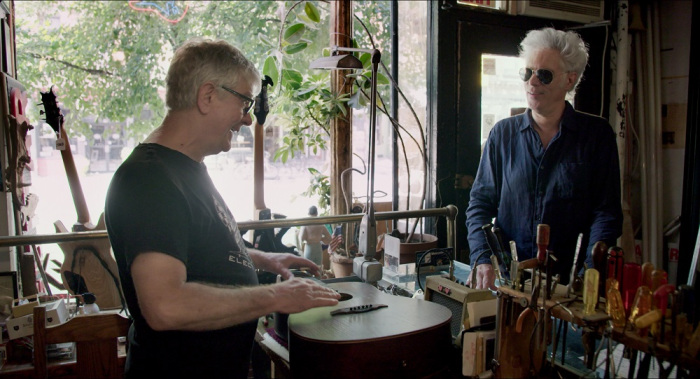 “Carmine Street Guitars” is a one-of-a-kind documentary that exudes a gentle, homespun magic. It’s a no-fuss, 80-minute-long portrait of Richard Kelly, who builds and sells custom guitars out of a modest storefront on Carmine Street in New York’s Greenwich Village, and the film touches on obsessions that have been popping up of late, like fragrant weeds, in the world of documentary. “Carmine Street Guitars” is all about the weirdly grounded pleasures of analog culture; about the glory of hand-made artisanal objects in a world dominated by mass corporate production; about the aging, and persistence, of old-school jazz and rock ‘n’ roll; about the fading of bohemia in a world of rising rents, omnivorous bottom lines, and chain-store values; and about how all those themes fuse into a Zen ideal of doing what you love and loving what you do.

The film sounds earnest and touching in a minor, twilight-of-the-’60s way. Yet the beauty of “Carmine Street Guitars,” as directed by the documentary veteran Ron Mann (“Comic Book Confidential,” “Grass,” “Altman”), is what a stubbornly off-the-beat concoction it is. If Jim Jarmusch ever made a documentary, it might look just like this one. Actually, Jarmusch has made a documentary, the 2016 Iggy Pop and the Stooges profile “Gimme Danger” (a solid film, though surprisingly conventional), but I’m talking about if Jarmusch ever made a documentary as eccentric and delectable in its minimalist vibe as his fiction features. In “Carmine Street Guitars,” the characters are characters, the way they were in Errol Morris’s “Gates of Heaven.” You react to them as if they’d stepped out of a folk fable, and that’s the film’s quiet intoxication.

Rick Kelly, white-haired and soft-spoken, with a shy curl of optimism to his lips, is an awesomely modest craftsman who has built instruments for Lou Reed, Patti Smith, and Bob Dylan. (There’s a running joke about how Kelly’s 93-year-old mother, who shows up each day to answer the phone and dust the store, can’t seem to get the signed photo of Robert Quine to sit straight.) In “Carmine Street Guitars,” Kelly isn’t just a devoted artisan — he’s the Geppetto of rock ‘n’ roll, taking humble blocks of wood and breathing life into them. He salvages the wood from old New York buildings, most of which date back to the 1800s. He’s got chunks of the speakeasy-turned-former-local-bar Chumley’s, the Serbian Orthodox Cathedral, and New York’s oldest watering hole, McSorley’s Ale House, built in 1854 (“People have been spilling beer on this wood for over 160 years”).

He’s making instruments out of the city’s bones, which is a cool idea, the sort of thing you could imagine appealing to the Agnès Varda of “The Gleaners & I.” But then, in a moment as exquisitely understated — you could almost say it’s thrown away — as everything else in “Carmine Street Guitars,” we learn the incredible value of using that wood. Because it’s so old, the resins have crystalized, leaving the tiniest of air spaces. That gives the wood its unique sonic vibrance. It makes an electric guitar sound big.

Kelly’s guitars are objects of beauty, lacquered and grain-scarred, with a disarming plainness. They’re made in the style of Fender’s original commercial solid-body electric guitar: the Telecaster, which appeared on the market in the fall of 1950. (The Stratocaster, which took that design into the Atomic Age, appeared four years later.) Kelly didn’t always make neo-Telecasters — we see a few of his guitars from the ’70s, and they’re as outlandishly molded and styled as any custom car. (His old sketchbooks look as trippy as R. Crumb’s.) Kelly’s devotion to the Tele (pronounced “telly”), and his whole aesthetic of refined primitivism, is a choice, a statement, one that resonates in sound and spirit.

“Carmine Street Guitars” is full of scenes in which a  noted hipster musician (Lenny Kaye from the Patti Smith Group, Nels Cline from Wilco, Charlie Sexton from the Bob Dylan Band, Eleanor Friedberger from the Fiery Furnaces) will walk into the store, plug one of Rick’s guitars into the amp, and just play, and we experience the joy of what they hear and feel in those instruments — a spiky je ne sais quois. The jazz guitarist Bill Frisell does a solo rendition of “Surfer Girl” (no vocals; he plays the melody and the chords), and the reverb splendor of it takes your breath away. Kirk Douglas, from the Roots, speaks for the whole film when he says, “I love the simplicity of it. One pickup. Wood. Electricity. Boom.” He’s really saying: What guitarist worth his or her salt needs anything more?

The musical supporting players include Jarmusch (billed as a member of Sqürl) and Eszter Balint, the star of “Stranger Than Paradise.” But if that sounds annoying, “Carmine Street Guitars” isn’t a fatally hip bauble. It’s a non-fiction prose-poem that moves to Rick Kelly’s pre-technological rhythms. He’s a man who doesn’t own a cell phone, who doesn’t have the Internet at home. Yet if Rick shuns the digital world, his apprentice, Cindy Hulej, is a 25-year-old platinum cat-eyed punk who specializes in wood-burning — the guitar equivalent of tattoos — and knows how to showcase the funky elegance of Kelly’s designs on Instagram. Kelly spends all day in his shop, which is just cluttered enough to give off a hoarder vibe (though he knows where every tool is); he uses an old bandsaw and a pin router to sculpt each instrument, as well as a carver that dates back to his grandfather to whittle down the neck, shaving by shaving. The result fits into your hand like it was part of you.

“Carmine Street Guitars” is structured as a week in the life of this unlikely store. Yet it’s part of the film’s ironic charm that I didn’t necessarily buy the “Monday Tuesday Wednesday” flow of it. Did Ron Mann actually film Rick Kelly’s store for a single week, and these were the people who happened to show up? Including the smarmy real-estate agent who just sold the building next door?

From what I’ve read (it’s never discussed in the film), Rick Kelly can take more than a year to deliver a commissioned guitar. In the movie, he grabs a piece of that old dark gnarled McSorley’s bar, and by the end of the movie we see the guitar he has made of it. (It’s a fugly gem.) A lot of the musician cameos feels like a mix of the spontaneous and the arranged, and that’s okay, because Ron Mann achieves something in “Carmine Street Guitars” that’s better than mere verité authenticity. He turns Rick’s store into a stage set, with Rick as the wallflower/artisan/host who can’t stop making guitars, in part because he can’t afford to (he has no retirement savings), but mostly because he has found a religion. It’s the sound of wood + electricity + something else: the kickass human heart.