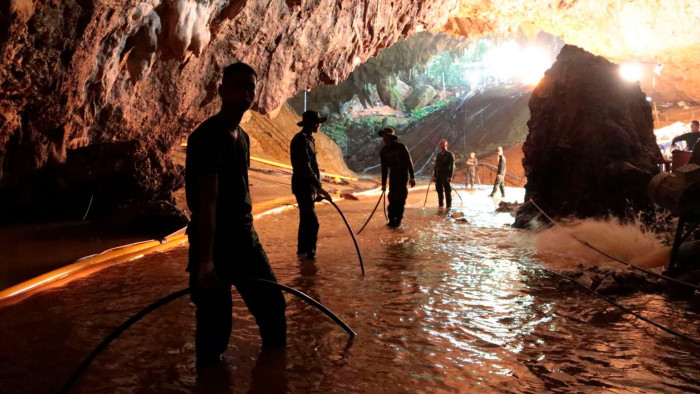 In today’s film news roundup, National Geographic is making a Thai cave rescue movie, AMC has a big weekend at the box office, and Gugu Mbatha-Raw’s “Fast Color” gets a release date.

Yet another movie is in the works about last year’s cave rescue in Thailand.

National Geographic Documentary Films has greenlit a feature about the 2018 rescue of a Thai soccer team trapped deep inside a flooded cave.

Kevin Macdonald (“One Day in September”), John Battsek, P.J. van Sandwijk, and Michael Lesslie are working on the pic about the Wild Boars youth soccer team of 12 boys and their assistant coach being trapped for two weeks before being rescued.

“This rescue mission is more than just a story of hope, it’s a story of humanity coming together,” Macdonald said. “This film will represent a full 360-degree view of the crisis, told through unexpected angles and with untold stories.”

All 15 of the 15 highest-grossing movie theaters in the U.S. this past weekend were AMC Theatres.

The chain said it’s the first time in history that a single chain has achieved the feat. It cited recliner seating, a growing number of premium large format screens, and improved food and beverage offerings as the key reasons, along with its subscription services AMC Stubs and AMC Stubs A-List as box office drivers.

Lionsgate has set an April 15 release date for the sci-fi thriller “Fast Color,” starring Gugu Mbatha-Raw as a woman with supernatural abilities, who must go on the run when her powers are discovered.

With nowhere else to go, she returns to her family and the farmhouse she abandoned long ago. While being pursued by the local sheriff (David Strathairn), she begins to mend the broken relationships with her mother (Lorraine Toussaint) and daughter (Saniyya Sidney).

The film, directed by Julia Hart, had its world premiere at last year’s South by Southwest Film Festival. It’s produced and written by Jordan Horowitz (“La La Land”) and Hart under their Original Headquarters label. Mickey Liddell and Pete Shilaimon also serve as producers and fully financed the film under their LD Entertainment banner.