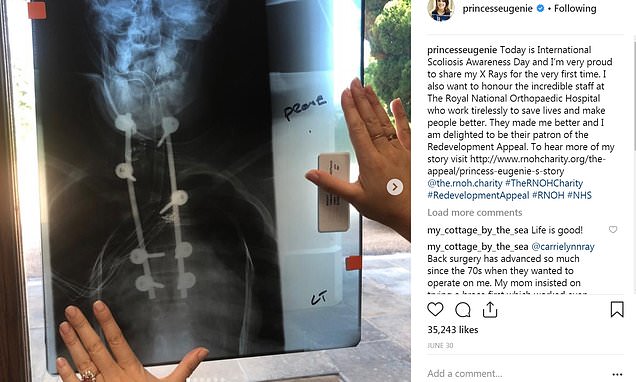 Sarah Ferguson has claimed her daughter Eugenie would have been ‘put in an asylum and locked up’ if she had been born with scoliosis in a different country.

The Duchess of York, 59, was speaking at a glitzy party celebrating her charity Street Child’s tenth anniversary at Kensington Palace when she made the remarks about Princess Eugenie’s spinal condition.

Eugenie, 28, had major surgery to correct her curved spine at the age of 12, and made headlines around the world last month when she showed off her scars in a backless wedding gown. 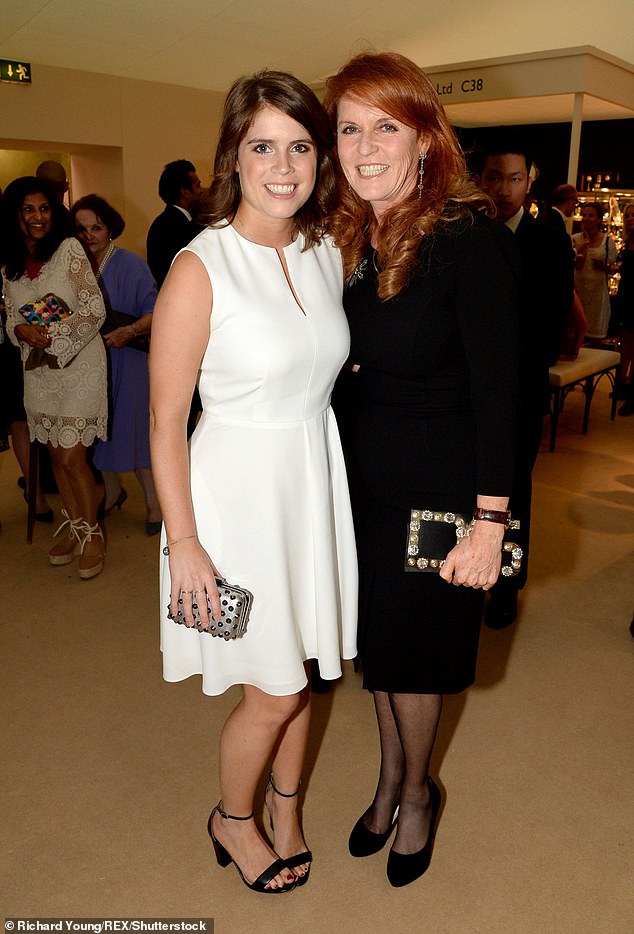 Sarah Ferguson, Duchess of York has spoken about her daughter’s scoliosis struggle at a charity event (pictured together at the Art Antiques Fair, London in 2014) 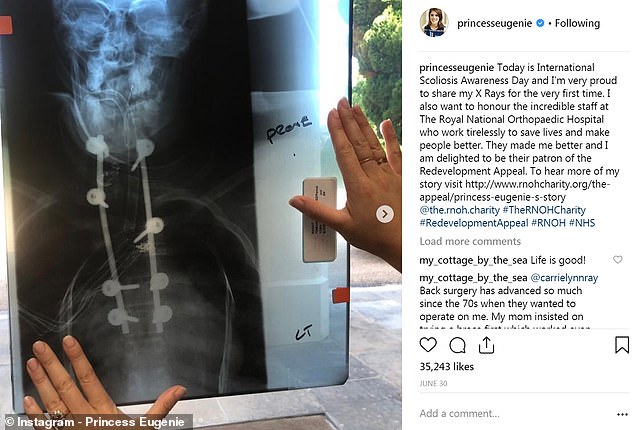 Princess Eugenie, 28, had major surgery to correct her curved spine at the age of 12 and shared images of her X-rays for the first time on Instagram earlier this year (pictured)

‘She had scoliosis. In other countries in the world she would be put in an asylum and locked up.’

She also praised son-in-law Jack Brooksbank for ‘trying to tame the lion, which is my daughter’, according to Hello! magazine.

Eugenie grew two inches as a result of the operation in October 2002 to correct scoliosis, an abnormal curvature of the spine.

The Queen’s granddaughter had 12in metal rods inserted into her back in the operation at The Royal National Orthopaedic Hospital in north London.

Eugenie, who shared the X-ray pictures in Instagram earlier this year, is patron of a £15m appeal to build a new ward block for the hospital at Stanmore, north London.

The insertion of metal rods is one way of treating children with the condition in which the spine is curved too much; they are lengthened as the child grows and removed when they reach adulthood. 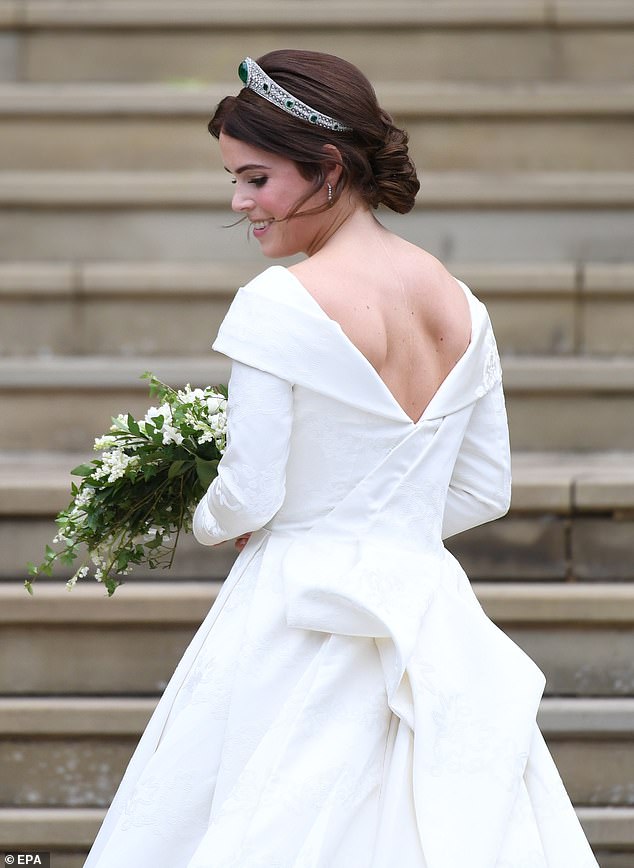 Fergie also recently spoke of her ‘pride’ over Eugenie after she chose to ‘bravely’ showcase her scar from her scoliosis (pictured on her wedding day at Windsor Castle, 12 October) 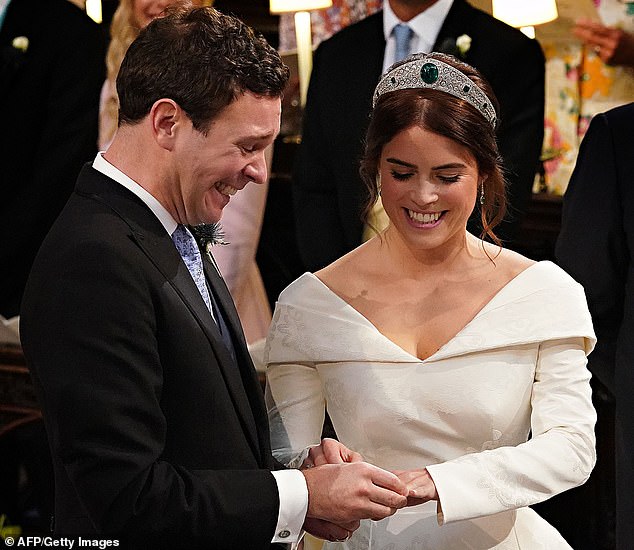 The Duchess of York has opened up about becoming mother-in-law to Jack Brooksbank who married her youngest Eugenie last month. Pictured: The newlyweds exchanging rings

In an interview with the Mail on Sunday at the time, Fergie said: ‘We thought it was a small curvature but it was mammoth.

‘Her bones had oscillated to such a degree that by the time she reached 18 she would have been a hunchback. It was horrendous.

‘My little girl was in that operating theatre for seven hours, but she is straight and she will stay straight.’

Fergie has not been shy when it comes to sharing details of her daughter’s wedding, opening up about her pride during an interview with Good Morning Britain last week.

‘I loved every moment of it, I was so proud,’ she said during the interview. ‘The love between them is enormous, its twin flames and they are meant to be together.

‘To see Eugenie blossom like she has and to be so brave with her scoliosis.’ 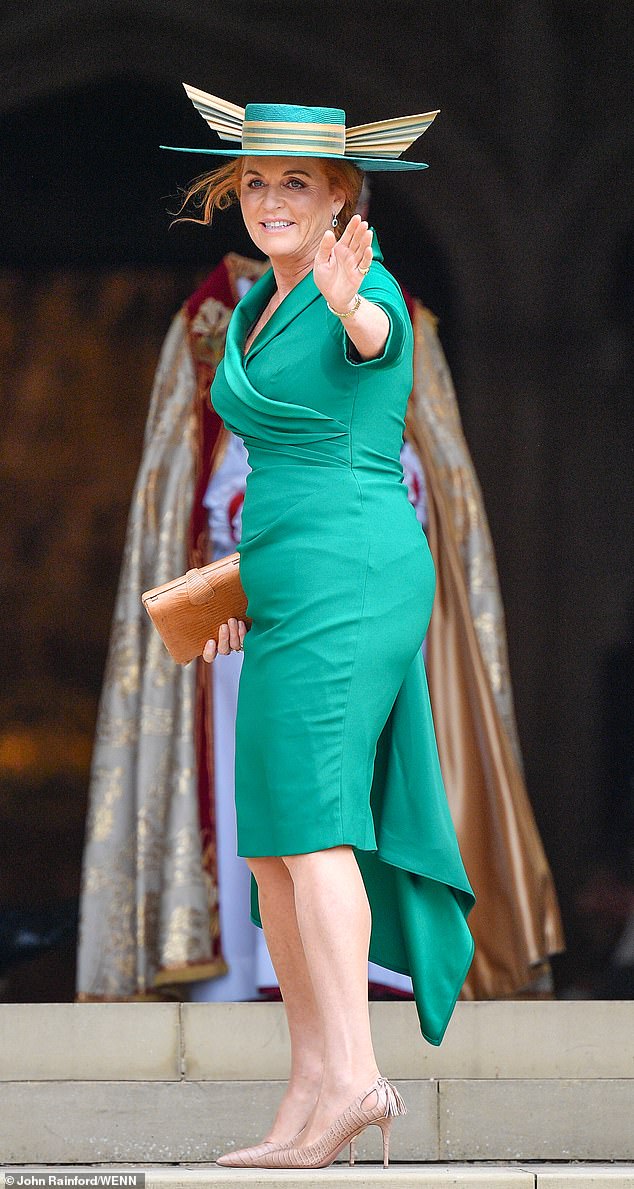 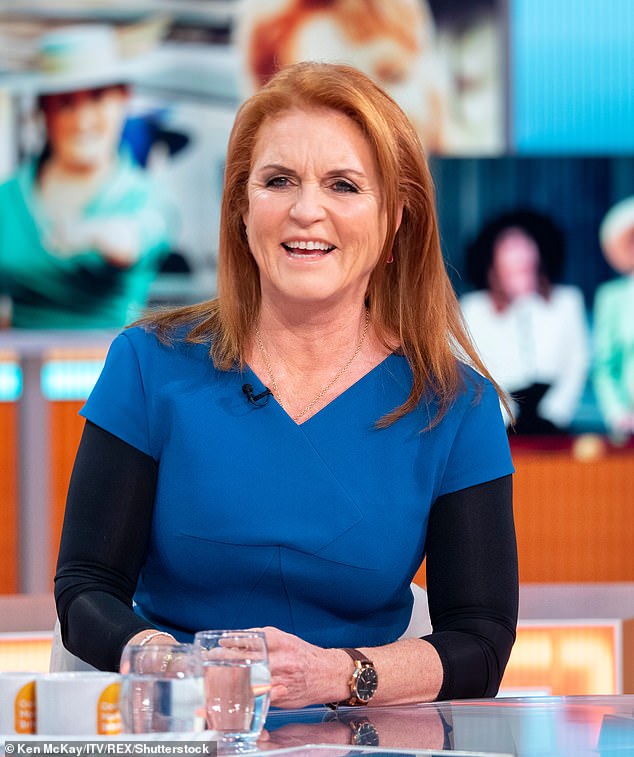 Sarah recently appeared on Good Morning Britain where she said that Jack and Eugenie ‘are meant to be together’, and she has heaped praise on Mr Brooksbank once again this week

Prince Andrew’s ex-wife also spoke of the inspiration behind the unusual hat that she wore on the big day.

The 59-year-old wore a wide-brimmed titfer by Jess Collett, featuring two straw ‘wings’ coming out of the side – leading to comparisons with the golden snitch from Harry Potter.

But Sarah said she didn’t mind the jokes as she ‘loves the golden snitch’ when questioned about her eye-catching headgear, but admitted she ‘hadn’t realised’ the resemblance at the time.

The Duchess said that she had wanted the ‘Argentine look’ to pay tribute to her mother Susan Barrantes.

Susan caused a stir after eloping to Argentina with a professional polo player when Fergie was a child. She later died in a car accident in Buenos Aires at the age of 61. 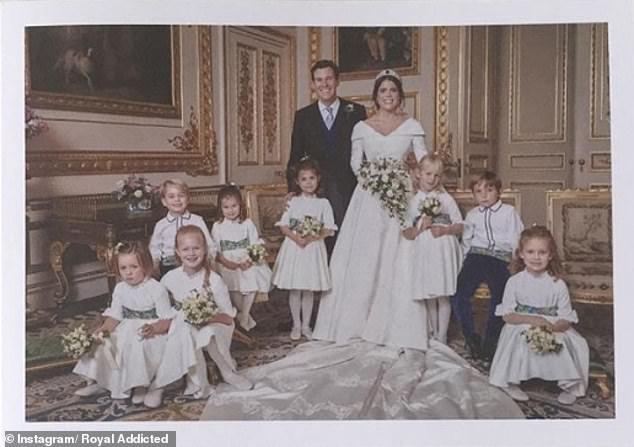 Sarah Ferguson, who turned 59 on October 15, also sent out thank you letters to those who had wished her daughter Princess Eugenie congratulations following her wedding to Jack Brooksbank last month. Pictured: She chose this official portrait to accompany the letter 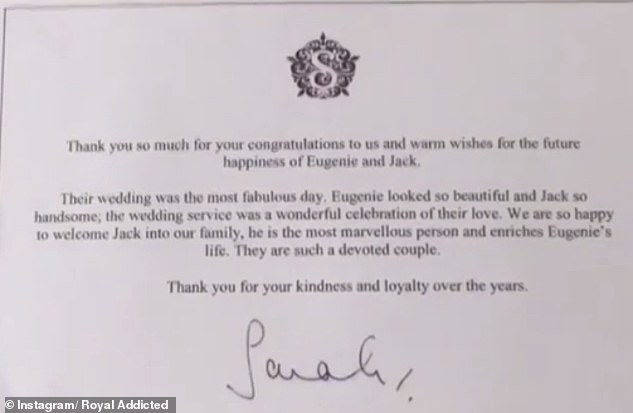 In the card she described the bride as ‘so beautiful’ and the groom as ‘so handsome’. And speaking to Hello! magazine this week, Fergie likened Jack Brooksbank to James Bon

The mother-of-two, who turned 59 on October 15, recently sent out thank you letters to those who had wished her daughter Princess Eugenie congratulations following her wedding to Jack Brooksbank last month.

She opted for the same photo that the couple had issued in their own thank you cards – the portrait of the newlyweds taken by photographer Alex Bramall in Windsor Castle’s White Drawing Room.

In the card Sarah wrote: ‘Thank you so much for your congratulations and warm wishes for the future happiness of Eugenie and Jack.

‘Their wedding was the most fabulous day. Eugenie looked so beautiful and Jack so handsome; the wedding service was a wonderful celebration of their love.

‘We are so happy to welcome Jack into our family, he is the most marvellous person and enriches Eugenie’s life. They are such a devoted couple.

‘Thank you for your kindness and loyalty over the years.’