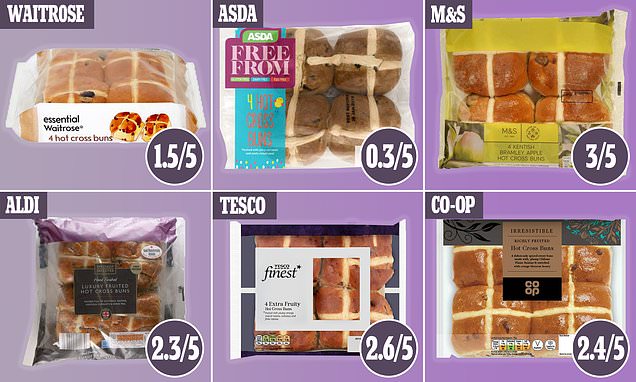 The great hot cross bun taste test! FEMAIL tries out 10 traditional treats to find the best supermarket offering – so, which came out on top (and which one narrowly escaped 0 out of 5?)

With an indulgent long weekend looming, the supermarket shelves are brimming with tempting Easter treats.

This year several outlets have expanded their hot cross bun range, with Marks and Spencer introducing a vegan variety and Tesco and Asda offering ‘free from’ buns, banishing ingredients like gluten, milk, egg and wheat.

With an overwhelming amount of choice, it’s hard to know which hot cross buns are truly hot, and which are not.

That’s where we come in. This Easter FEMAIL has done the leg work for you by trying not one, but 10 different fruity buns from leading supermarket brands in a completely blind taste test. 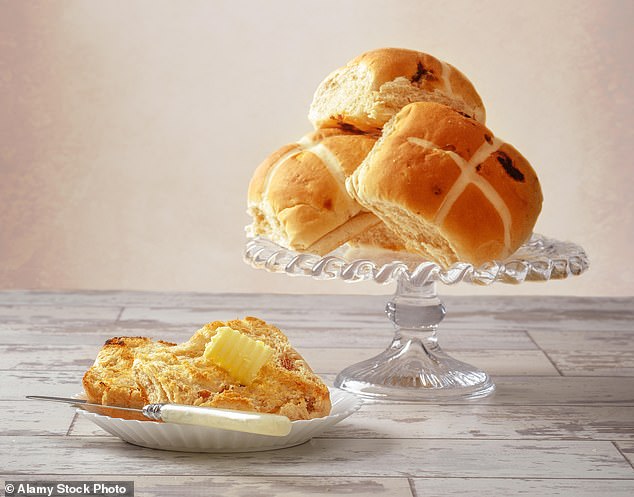 This year several outlets have expanded their hot cross bun range, with Marks and Spencer introducing a vegan variety and Tesco and Asda offering ‘free from’ buns, banishing ingredients like gluten, milk, egg and wheat

Six writers sampled a range of extra fruity, bramley apple and ‘free from’ hot cross buns and gave each one a score out of five.

And they didn’t hold back – with several less popular treats receiving a damning zero out of five and one requiring an emergency toilet trip to spit it out. So, can you guess which ones were ‘bunderful’ and which left a bad taste in our mouths? 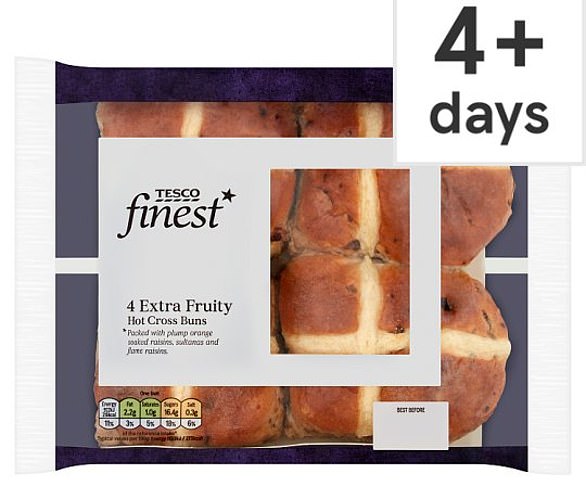 ‘The buns were very sticky and juicy with an ample fruit content. I enjoyed the strong essence of cinnamon. Didn’t need butter to be tasty, it was bunderful’ –Hayley Richardson. VERDICT: 4.5/5

‘The cinnamon was really strong which I love, and the flavour was great, but there were too many currants which overpowered it (although that might be a personal thing because I don’t love currants)’ – Bridie Pearson-Jones. VERDICT: 4/5

‘This was NOT my favourite bun. It tasted really dry, and it didn’t have the normal gleam of a hot cross bun. The texture was a little too doughy, and the aftertaste wasn’t great’ – Harriet Johnston. VERDICT: 2/5

‘You can definitely feel the spices and tastes of orange, which makes it a bit bitter. Not my favourite’ – Claire Toureille. VERDICT 1/5

‘It’s a no from me. Can taste so many spices in just a small bite making it really overpowering’ Bryony Jewell. VERDICT 1/5

‘VERY dry in terms of look and taste. It had an almost powdery texture and really lacked flavour. The only thing that saved these buns was the fruit – and they could have done with some more currants‘ – Hayley Richardson. VERDICT: 1/5

‘Not a fan, really dry and immediately wanted a glass of water after a bite. Flavour was really mild. It just tasted like stale bread with weird sugar added’ – Bridie Pearson-Jones. VERDICT 1/5

‘It was incredibly dry, and not just to the taste, but also to the touch. Somehow also managed to be chewy and doughy in the middle. Quite frankly, I’m stunned by this bun’ – Harriet Johnston. VERDICT 1/5

‘Although its consistency was a bit dry, the taste of the bun was definitely pleasant’ – Claire Toureille. VERDICT 3/5

‘A little dry around the edges and chewy but more of a traditional hot cross bun taste that I’d happily enjoy with some butter on’ – Bryony Jewell. VERDICT 5/5 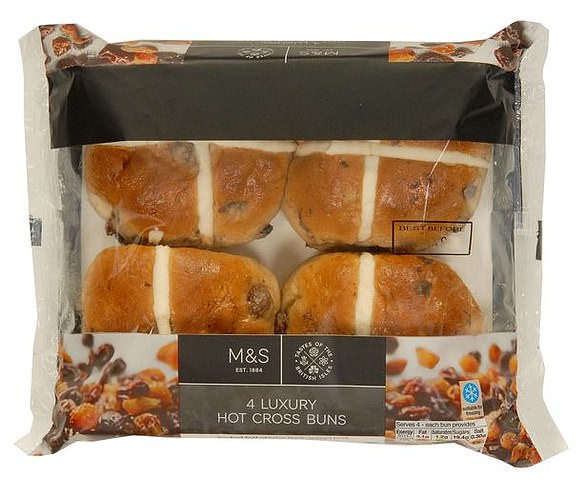 ‘Texture was a bit cloying and the fruit didn’t have the same burst of sweetness the other buns had and they lacked a bit of spice’ – Hayley Richardson. VERDICT 3.5/5

‘Very doughy and chewy. Would be better toasted with butter, but nice level of flavour’ –  Bridie Pearson-Jones. VERDICT 2/5

‘Good glaze on the top of this bun, plus a more curranty, spicy flavour’ – Harriet Johnston. VERDICT 3/5

‘Similar to number one but with slightly more subtle flavours. Very moist with a nice orange flavour – without verging on bitter. Very good!’ – Claire Toureille. VERDICT 4/5

‘This one had a doughy texture and a lot of spice but it balanced nicely so that it didn’t overwhelm me’ – Bryony Jewell. VERDICT 4/5

‘Much nicer bun with a good solid glaze on top’ – Sarah Finley. VERDICT 3/5 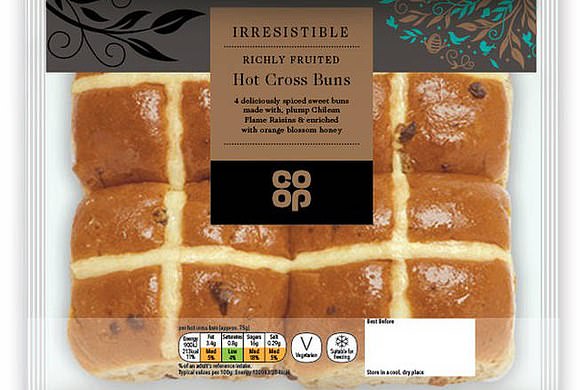 ‘Tasted a bit bland, with a slightly doughy texture. The fruit also didn’t pack much of a punch, I picked up a very small hint of orange zest. Generally not very exciting’ – Hayley Richardson. VERDICT 3/5.

‘Really nice texture and the raisins were mild but the cinnamon was a good level’ – Bridie Pearson-Jones. VERDICT 3/5

‘Another dry bun. I’d be disappointed to eat this on Easter day’ – Harriet Johnston. VERDICT 1/5

‘Perhaps I just don’t like hot cross buns! This one is very similar to number two, as it is very dry, and the taste of orange is slightly too strong’ – Claire Toureille. VERDICT 2/5

‘Chewy but I didn’t really get any flavour from it. Maybe this one would be better toasted or with some butter/jam on top’ – Bryony Jewell. VERDICT 3/5

‘This one was quite dry but had a good cinnamon flavour’ – Sarah Finley. VERDICT 2.5/5 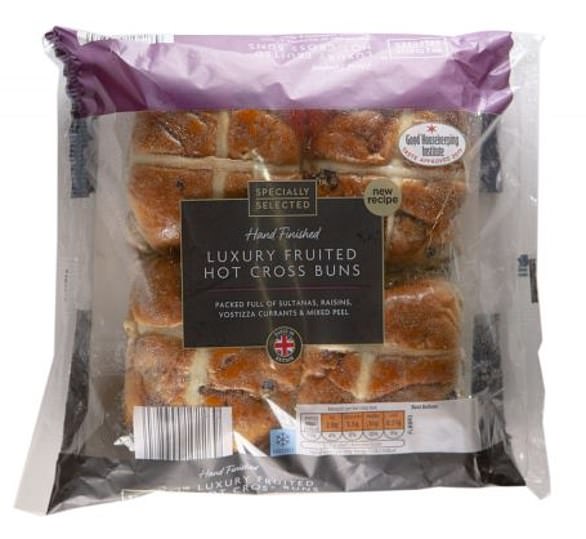 ‘Pretty dry and lacking in much taste, plus the fruit looked a bit small and dried up so it didn’t deliver that juicy kick‘ – Hayley Richardson. VERDICT 2/5

‘Very soft and mild flavour, I could easily see myself gorging on too many of these. Spices weren’t particularly strong though, the combo of mild flavour and soft bread made it seem like something I’d give to my six-year-old nephew’ – Bridie Pearson-Jones. VERDICT 3/5

‘Tasted weirdly salty and very bitter. Definitely was not a fan, although the consistency was neither too dry nor too doughy’ – Claire Toureille. VERDICT 0/5

‘This one was enjoyable but my currants seemed a bit strange – like they’d leaked into the bread making it a bit soggy. Nothing some toasting wouldn’t fix though’ – Bryony Jewell. VERDICT 3/5

‘Lots of sultanas and nice and moist – this was definitely my fave so far‘ – Sarah Finley. VERDICT 4/5 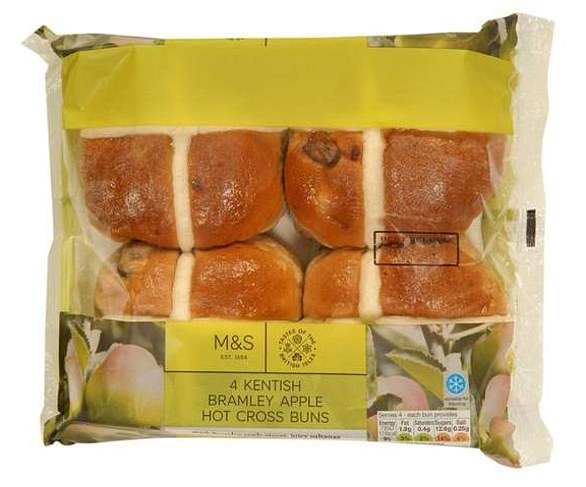 ‘Ideal for little ones due to their familiar fruity flavour’

‘These didn’t pack much of a punch when it came to spice, but they were quite moist. I enjoyed the small chunk of apple in my sample, but I felt they’d sacrificed currants so they wouldn’t be my number one choice’ – Hayley Richardson. VERDICT 3/5

‘This one smelt really fresh but unfortunately the taste didn’t deliver. Too dry and not a lot of flavour. If it was toasted with jam I could see myself putting my feet up and enjoying it with a cuppa, but there’s nothing special‘ – Bridie Pearson-Jones. VERDICT 2/5

‘Much better texture. Tasty glaze too, I’m just not convinced on the flavour’ – Harriet Johnston. VERDICT 3/5

‘This mild and doughy version of the hot cross bun was definitely my favourite overall. It had flavours of a muffin, with a slight after-taste of cinnamon that I really liked’ – Claire Toureille. VERDICT 3.5/5

‘I thought this bun had an almost perfect texture and balance of cinnamon. The fruit was nice and juicy too!’ – Bryony Jewell. VERDICT 4/5

‘Nothing which makes this bun stand out, not much fruit’ – Sarah Finley. VERDICT 2/5 ‘Really wasn’t keen on these. They lacked that classic shiny glaze and carried an almost bitter taste. Weren’t particularly moist – could have done with more currants’ – Hayley Richardson. VERDICT 1/5

‘The smell was really good, suggesting I was to be taken into a world a cinnamon goodness – but I was very disappointed. It was so plain and tasted the least natural of the group. It was like it was made in a lab by people guessing what a hot cross bun should taste like’ – Bridie Pearson-Jones. VERDICT 1/5

‘Has an almost floral perfumey flavour to me. Not good’ – Harriet Johnston. VERDICT 0/5

‘This one was quite mild and forgettable. It didn’t taste bad, but did not rock my world either’ – Claire Toureille. VERDICT 3/5

‘I wasn’t over whelmed with this bun, it wasn’t bad but not a fantastic treat either – rather bland’ – Bryony Jewell. VERDICT 3/5

‘This one was dry, pale-looking and had a weird taste to it’ – Sarah Finley. VERDICT 1/5 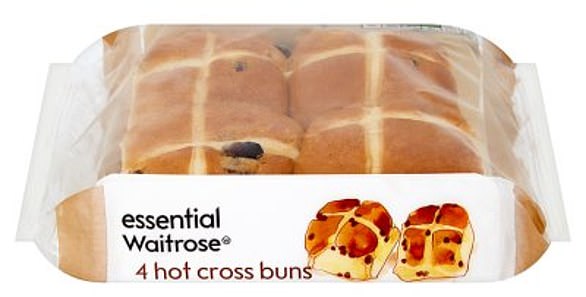 ‘On appearance these were pretty average and looked bit bread-like, but they tasted alright. The fruit was quite sweet and spicy which made up for the bun itself being a tad bland. Inoffensive but nothing special’ – Hayley Richardson. VERDICT 2/5

‘SO CINNAMONY! It smelt like a Yankee Candle, in a good way. I liked the flavour but the texture let it down, so stale and dry’ – Bridie Pearson-Jones. VERDICT 3/5

‘Cannot describe how dry that is. Very pale in colour, but a currant flavour’ – Harriet Johnston. VERDICT 0/5

‘Strong contender for first place, along with number six. I could taste subtle spices and the cinnamon’ – Claire Toureille. VERDICT 3.5/5

‘As well as smelling really good, this one had a great texture and tasted really nice – and wouldn’t be too filling if you decided to go back for another’ – Bryony Jewell. VERDICT 5/5 ‘The glaze on these ones was aesthetically pleasing, and the fruit content was especially generous which I liked. Pretty tasty’ – Hayley Richardson. VERDICT 4/5

‘The flavour was nice, the cinnamon was a good level but it wasn’t overwhelmingly sweet. Very soft and chewy’ – Bridie Pearson-Jones. VERDICT 4/5

‘More buttery and delicious in flavour. Still not my favourite’ – Harriet Johnston. VERDICT 2/5

‘An average grade for an average taste. Number nine was good, but did not really stick out‘ – Claire Toureille. VERDICT 2.5/5

‘This had a really good mix of everything – slightly crispy on the edges and the right level of chewy on the inside. Definitely a good eat!’ – Bryony Jewell. VERDICT 4/5

‘This one was nice and light and quite citrusy, a definite contender’ – Sarah Finley. VERDICT 3/5 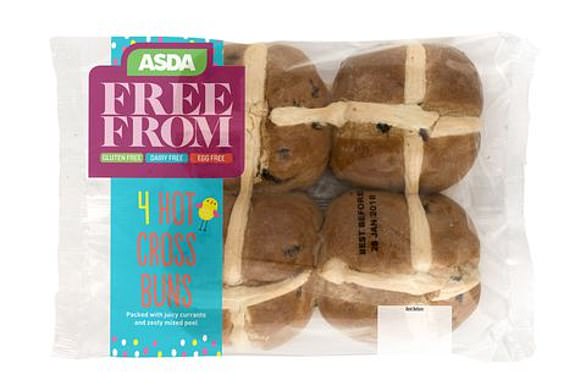 ‘I actually went to the toilet to spit this one out. It was grim – powdery, tough and the fruit had a sour kick to it. Didn’t look particularly appealing either and was hard to tear and it felt a bit conjealed. Yuck!‘ – Hayley Richardson. VERDICT 0/5

‘Gross. Took one bite and felt sick. It felt wet on the outside but the texture was like sandpaper. It was like a weird mushroom and completely flavourless, all the spice was in the crust and the bread itself tasted like dry white bread with hundreds of tiny bugs in. Do not recommend’ – Bridie Pearson-Jones. VERDICT 0/5

‘It tasted like a mushroom. It was squishy, did not taste like cinnamon or spices or anything. It just tasted bad. Never again!’ – Claire Toureille. VERDICT 1/5

‘Way too wet. Even as I was holding the bun parts of it were slipping off AND it tasted dry’ – Bryony Jewell. VERDICT: 1/5

And the winner is…

It’s joint victory for Marks and Spencer and Asda, with both stores offering up buns that received the top score of 3.25 out of five.

The M&S favoured buns were the ‘luxury’ variety as opposed to the vegan ones, though these didn’t fare too badly, receiving a score of 2.9 out of five – high for our test and third place overall.

The Asda ‘extra fruity’ buns performed well, but it’s free from variety scored the worst marks, notching up a meagre 0.3 out of five, with several writers finding them inedible.