FACT CHECK 1: “The cost of living is about money in as well as money out, and in terms of wages growth, we’ve seen wages go backwards in the last year – we’ve seen wages flatline for 10 years.” Anthony Albanese, May 8. 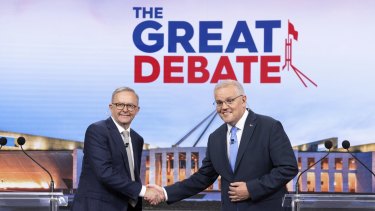 Wages have become an issue towards the end of the federal election campaign.Credit:Alex Ellinghausen

During the leaders’ debate on Sunday night, he said real wages – that is pay packets after taking into consideration the rising cost of the living (or “money out” as he put it) – had fallen in the past year, and had flatlined for a decade.

But Prime Minister Scott Morrison hit back, suggesting there was no easy fix, declaring there was “no magic pen” to lift wages.

How do we measure real wages?

There are several measures of wages, but the most common is the wage price index, published every three months by the Australian Bureau of Statistics. It measures changes in average hourly wage and salary costs. It is regarded as a good, steady gauge because it is unaffected by changes in the quality or quantity of work performed, or changes to the structure of the jobs market. The latest wage figures cover the December quarter of 2021.

Real wages measure the buying power of people’s pay packets. For example, if a worker is getting paid the same amount but prices are rising, they are worse off. Their nominal wage may not have changed, but their real wage has fallen. As Albanese put it, it’s all about money coming in, and money going out.

The Age and The Sydney Morning Herald combined the wage price index (showing average rates of pay excluding bonuses) with the consumer price index (measuring the average cost of living) to create a measure of real wages.

Because Albanese referred to wages growth over the past 10 years, we set the index number at 100 for December 2011, marking the starting point (this covers about two years under the former Labor government).

What has happened to real wages?

In nominal terms, wages have increased fairly steadily over the past decade. So has inflation, but on average, nominal wages growth has been slightly higher. That means real wages have crept higher over 10 years – but only just.

Because the cost of living has risen at a faster pace than pay packets over the past year or so, real wages have fallen over that period. In terms of buying power, workers are no better off today than they were about four or five years ago.

During the Rudd and Gillard Labor years (from the December quarter of 2007 to the September quarter of 2013), real wages grew by 4.3 per cent in total, translating to an annual average growth rate of about 0.7 per cent.

Since the Coalition was elected (starting in the December quarter of 2013), real wages increased by a total of 2 per cent, representing an annual average pace of about 0.2 per cent.

Does this mean real wages have flatlined over the past decade?

Over the past 10 years, the period referred to by Albanese, real wages increased 3.1 per cent, or at an annual average of about 0.3 per cent.

Whether this represents “flatlining” – which in a colloquial sense means something that is showing no signs of life – is subjective.

It is certainly fair to say real wages growth has been historically low over the past decade. And as Albanese correctly notes, real wages have fallen in the past year.

Could a political ‘magic pen’ fix this?

There are some things the federal government can do.

First, while the Morrison government does not set the minimum wage – which underpins other wages – it can influence it.

The national minimum wage (currently $20.33 an hour) is set by the independent Fair Work Commission. Each year the commission considers submissions, and then makes a new determination, after weighing up economic, labour market and social considerations.

The federal government makes an annual submission to these reviews. The Coalition has generally called for restraint. In the latest wage review, for example, the government urged the Fair Work Commission’s expert panel to “take a cautious approach” because of the pandemic.

Second, the federal government is one of the nation’s biggest employers. It plays a direct role setting the pay packets of the nation’s public servants. It has also taken a cautious approach on this front. Under the current rules, annual wage increases for Commonwealth public servants “can no longer exceed wage rises in the private sector”, and “agencies may negotiate a lower outcome” than private sector wage increases.

In April 2020, the government announced it was freezing wages for Commonwealth public servants for six months. In a competitive national labour market, these decisions arguably indirectly place downward pressure on private sector wages as businesses compete with the bureaucracy for workers.

Finally, over the longer term, the federal government can help lift wages by focusing on boosting productivity and jobs. While Australia’s unemployment rate has fallen, lifting Australia’s flagging productivity rates remains a longer-term problem that economists say will require investments in skills and innovation, among other things.

So while there may not be a magic pen, it would be wrong to suggest there is nothing the federal government can do.