The $75,000 first prize in the nation’s newest portrait award, the prestigious Darling Portrait Prize, has gone to painter and book illustrator Jaq Grantford – and all it took was a little creative visualisation.

“I said to myself, I’d like to have a work hanging in the National Portrait Gallery one day,” she says.

There was evidently power in those words – Grantford on Friday won the Darling with a technically brilliant self-portrait, combining whimsy with emotional depth. 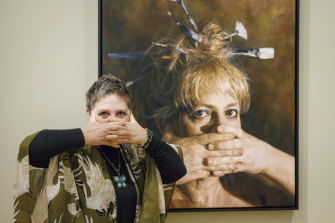 The eyes have it: Darling Portrait Prize winner Jaq Grantford with her self portrait.Credit:Terry Cunningham

“It’s definitely a lockdown portrait,” says Grantford, who is based in the Melbourne suburb of Carrum Downs. “My feelings during lockdown were very conflicted. There were things that we didn’t think could possibly ever happen like not being able to travel interstate or drive further than five kilometres. But then there was this guilty pleasure of the noise stopping around me and the pleasure of going into the studio. It was just me in my space – I’m an extroverted introvert.”

The winning work shows Grantford with her fingers interlaced across the lower half of her face and with paintbrushes emerging at odd angles from her untamed blonde hair. Over her 30-year career she has developed the habit of tucking brushes in her hair and behind her ears as she works.

However, it’s a habit she was forced temporarily to suspend after undergoing chemotherapy for cancer.

“Six months ago, I was completely bald,” she says. “I’m looking at this painting, with all this hair just going, ‘Who is this woman?’”

The Darling Prize is named for Gordon Darling, one of the founding patrons of Canberra’s National Portrait Gallery. Its first year was 2020 and this is only the second time it has been awarded due to COVID interruptions. Darling’s wife Marilyn Darling, also a founding patron and former chair of the gallery, on hand to announce this year’s winner, was impressed by the 39 finalists, including luminaries Wendy Sharpe and Jiawei Shen.

“The quality is unbelievably good,” Darling said. “Any of the portraits could win a prize somewhere. It’s a wonderful opportunity for these artists to get better known because very few of them are household names.”

Darling was also full of praise for this year’s winner.

“It’s exceptional,” she says. “The eyes looking out really capture you. You then wonder about the brushes. It almost makes you smile at first. And then you look at the face and you realise it’s not really a smile generator after all because she looks pretty troubled.”

Grantford has been fascinated by faces for as long as she can remember, even being told off as a child for staring at other passengers on the bus, captivated by their features.

She has also long been fascinated by hands, staging a show in 2011 of works solely depicting the hands of high-profile and everyday people, despite the popular idea hands are the most difficult thing for any artist to paint.

“I think it’s a myth,” she says. “They are just form and shape like anything else. And I think that sometimes artists maybe get scared off them. But I love hands.”