Farewell tours are tempestuous things. Are they to be trusted? Will this really be the last time?

In the case of Elton John's Farewell Yellow Brick Road tour, the three-year, five continent swansong to a career spanning more than 50 years, it's safe to say the man is, some time in 2021, hanging up his glitter Gucci glasses once and for all. 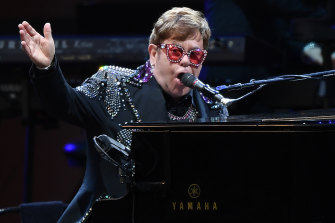 Still standing … Elton John opens his Victorian tour leg at A Day on the Green at Mount Duneed Estate.Credit:AAP

"Ten years ago, I didn't have a family, and I need to be with them," he offered to the 20,000-strong crowd at Mount Duneed Estate as his reason for retiring from touring.

He is of course referring to his husband, David Furnish, and their sons, Zachary and Elijah, all of whom are reportedly in Australia with him for this five-month Australian leg of the tour.

At 72, and roughly midway through the 300-date tour, Sir Elton shows no signs of slowing or fading.
In the cool Geelong air on Saturday night, the opening thuds of Benny and the Jets got the crowd on its feet before the star appeared, punctual to the minute, in a diamante-encrusted black morning suit.

The slick band, including veterans Davey Johnstone on guitar and percussionist Ray Cooper, are given plenty of opportunity to showcase their skills after decades of service to a performer who has, very publicly at times, weathered the ups and downs of stardom, most notably his public battle to beat drug and alcohol addiction.

The opening section moved through All the Girls Love Alice and I Guess That's Why They Call it the Blues, before Border Song, a tribute to the late, great Aretha Franklin.

Crowd favourites Tiny Dancer and Philadelphia Freedom follow, the massive screens projecting footage of brightly-clad people of all races and ages having a great time.

With a career and back catalogue as rich and deep as Sir Elton's, devising a set list for his farewell must have been a herculean struggle to balance the number ones with the songs that matter most to him.

It's clear he's taken plenty from column A and column B with a stirring rendition of Indian Sunset with only Cooper on percussion, before segueing into an extended Rocket Man, whose musical arrangement shows off Sir Elton's skill on the Yamaha grand, which is on a motorised platform that repositions the instrument – and the singer – several times during the 2.5-hour performance, which is otherwise, refreshingly, sparse on trickery. After all, everyone is here to see the man one last time.

And it's at the halfway mark, during Rocket Man, when it seemed a switch flicked and the crowd finally realised they may never see Elton John in the flesh again.

The sentimental song choices continue with Someone Saved My Life Tonight and Candle in the Wind, his tribute to Marilyn Monroe that he re-recorded in 1997 after the passing of his dear friend and fellow AIDS campaigner Princess Diana.

After a short break and costume change to a red, blue and white Gucci suit and blue glasses, comes one of the most musically satisfying numbers of the night, Funeral for a Friend/Love Lies Bleeding. Then it's back to "singalong time" with Daniel and a boppy rendition of Sad Songs, which is far better live than it ever was on the 1984 record Breaking Hearts.

Sir Elton then delivers a heartfelt thanks to the crowd – "I've had enough applause to last me a million lifetimes" – and then the hit parade begins with Don't Let the Sun Go Down on Me, through The Bitch is Back and I'm Still Standing.

The only drama of the night, after a security controversy in Perth and ticketing dramas in Adelaide, occurred between songs when a woman climbed on to the stage. She rushed at Sir Elton for a hug, and the star obliged before she is calmly removed by security.

Security bolstered, Sir Elton jumps into Crocodile Rock and Satruday Night's Alright for Fighting. And just when you think he's having too much fun to retire, it's over. For the encore, Sir Elton returns in a floral silk robe to perform a song-as-fan-tribute Your Song and, finally, Goodbye Yellow Brick Road.

Fans will be left to debate the set list, specifically whether certain hit songs were overlooked for more niche picks. But one thing that's hard to dispute is that for a man who has spent the past 50 years touring and recording, Sir Elton still knows how to put on one hell of a show.