Workplace deals that require some stevedoring companies to source up to 70 per cent of new recruits from a pool of union candidates and employees’ families and friends will come under fire from one of the country’s largest business groups on Friday.

The Australian Competition and Consumer Commission found last month the stevedoring firms, which move goods to and from ships, had extremely restrictive enterprise agreements with the Maritime Union of Australia that ate into their productivity. 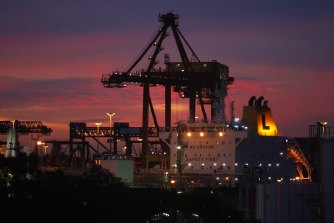 The stevedores’ industrial landscape is rare in Australia: a private sector industry where the union claims overwhelming membership.Credit:Dean Sewell

It said those rules were reducing efficiency at ports, adding to supply chain problems and should be addressed, in a call that Ai Group chief executive Innes Willox will take up on Friday.

“It is appropriate of course for enterprise agreements to contain provisions about wages and conditions of employment,” Mr Willox will say, according to notes from his speech to the Australian Labour Law Association’s national conference seen by The Sydney Morning Herald and The Age.

“But enterprise agreements should not be able to affect the supply or acquisition of goods or services by a business, including in relation to recruiting employees, using labour hire and outsourcing work.”

The MUA has previously argued it is not responsible for delays in the supply chain, instead blaming logistics, manufacturing and shipping problems overseas as well as maintenance and technical issues at stevedores such as Patrick Terminals.

“The Ai Group are trotting out the tired old myths and fake news of yesteryear about waterfront workers and their families in an effort to remain relevant for the big business players who provide their funding,” MUA assistant national secretary Jamie Newlyn said.

“Wharfies … [have] worked their guts out for the community over the past two years to keep containers coming into Australian ports. As we emerge from COVID, the last thing we need is a cheer squad for big business seeking to diminish the contribution our members have made so they can justify pay cuts, casualisation and a reduction in safety standards on the waterfront.”

A deal signed earlier this year between the MUA and Hutchison Ports dictated that 40 per cent of appointments covered by the agreement would be “family and friends of employees” with another 30 per cent “from the MUA”.

Patrick, which has been negotiating a new pay deal with the union for more than a year, has argued a clause in its current agreement for workers at Port Botany also essentially forces it to hire candidates close to the union.

Other rules negotiated by the MUA in the industry put restrictions on the use of outsourced workers, which workers are given shifts, and a host of other business practices the union has long argued are important to protect its workers’ job security and conditions amid rising automation.

Mr Willox will suggest the federal government either tighten up competition laws on enterprise agreements or create a list of practices that pay deals in the maritime industry cannot touch.

He also wants major changes to enterprise agreements across the board, some similar to those contained in the government’s proposed overhaul of industrial laws that was rejected by the Senate earlier in the year.