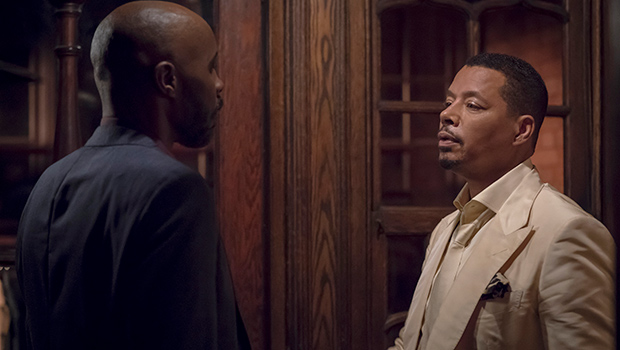 Cookie, you’ve got some explaining to do! During the Nov. 7 episode of ‘Empire,’ Lucious meets someone who will change his life, Giselle goes rogue, and a new flash forward scene raises new questions.

Cookie and Lucious are looking for their next person to sign to the management business. Lucious has his eye on Carlito. Thirsty has a way for Lucious to get him: a high stakes poker game. Lucious is all for this, but there’s just one thing. There’s a $500,000 buy-in. Lucious decides to sell the Derek Adams painting he gave to Cookie. Lucious thinks he’ll get it back before Cookie even notices. Meanwhile, Cookie and Porsha are trying to find a new artist around Manhattan. While Porsha is showing off her friend, Big City, she shows off her rapping skills, too! Maya’s adoptive mom stops by and asks for Cookie’s help. Maya’s in trouble.

Cookie realizes that Maya’s mixed up with the wrong trust fund baby. Later, Maya calls Cookie to bail her out of jail. Maya keeps making excuses for her shady boyfriend. When Cookie goes to see Maya, the youngster basically kicks her out.

TBD is killing it at Empire, but Kingsley is not impressed. He wants to drop the trio! Becky and Giselle are livid about it. Giselle tries to plead their case, but Kingsley is still not having it. He doesn’t want Lucious to get any credit for them. There’s also more to this story with Kingsley. In one of his personal boxes, there’s a picture of a woman. Who is she? When Kingsley walks to his window, he makes himself bleed. Dude has some issues.

Jamal and Becky have a sleepover in their onesies, and Jamal gets into Becky’s edibles. Kai joins them, and he later breaks the news to Becky that he and Jamal are engaged. She’s super upset that Jamal didn’t tell her the news himself.

At the poker game, Lucious meets a man named Damon Cross. Damon is a bit of a mystery, but he’s got a LOT of cash. During the game, a group of masked men come barging in with guns blazing. Damon and Lucious manage to escape, and Damon wants to connect with Lucious again. Turns out, Lucious planned the whole thing! Now he’s got $4 million in his pocket. Thirsty breaks the news that the Derek Adams painting has sold, and Lucious is furious. What Lucious doesn’t know is that Damon Cross bought it!

When Andre starts to see that Hakeem hasn’t left the studio, he reaches out to his brother. He wants Hakeem to see a therapist. Hakeem still holds a lot of resentment towards Andre for killing Bella’s mom, Anika. Andre apologizes for the pain he’s caused Hakeem. He never wanted to hurt Hakeem and Bella. He was just trying to avenge Rhonda and his baby boy. Andre vows to spend the rest of his life making it up to Hakeem. He just wants Hakeem to understand what they’ve both been through.

Giselle gets drunk and tells TBD that Kingsley wants to drop them. TBD is not going to take this sitting down, and neither is Giselle. The next morning, Giselle goes to Lucious and Cookie’s place with TBD.

The show flashes forward in the final moments of the episode to four and a half months later. The FBI has few questions for Lucious concerning Damon Cross. They have photos of Damon Cross and Cookie together looking quite cozy! What the heck?!