The clip with Taylor and a slideshow of guys she may have dated went viral on TikTok alongside a later interview many believe was criticizing that Ellen moment.

The clip with Taylor and a slideshow of guys she may have dated went viral on TikTok alongside a later interview many believe was criticizing that Ellen moment.

Every once in a while, the infamous clip of a distraught Taylor Swift facing a slideshow of men while Ellen DeGeneres asks her to ring a bell for any she’s date goes viral. This time, it got Emily Ratajkowski’s attention.

The clip was paired with a later interview with Taylor where the “Shake It Off” singer slams an earlier interview she’d been a part of where she felt reduced to the men she’d been with.

These Awkward Encounters Between Celebrities Are Cringeworthy

While Taylor never specified which earlier interview moment she was criticizing, many of her fans have connected it to that cringeworthy moment on “The Ellen DeGeneres Show” way back in 2012.

In the newer interview, she even talks about being faced with a slideshow of men she’d dated when she was around 23, and even ones she’d “sat next to at a part once” — which is certainly what happened with Ellen. Plus, Taylor turned 23 that same year.

Swift looked visibly uncomfortable in that original interview, even telling Ellen she didn’t want to play along then as the whole idea of it had her feeling bad

When Ellen handed her the bell, Taylor said, “I don’t know if I’m gonna do this,” arguing that, “This is the one shred of dignity that I have.” But Ellen was having none of it, ultimately ringing the bell “for” Taylor. 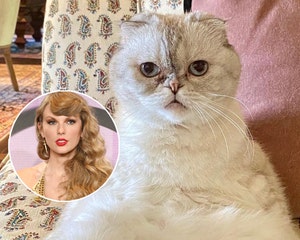 “Stop it, stop it, stop!” Taylor finally shouted, looking as if she was about to cry. “This makes me feel so bad about myself! … It just really makes me question what I stand for as a human being.”

In her comment, Emily certainly didn’t hold back about that original interview, writing, “This is so f—ed up. She’s literally begging her to stop.”

Taylor did continue her relationship with Ellen after this awkward moment, appearing multiple times over the years on her show and even inviting Ellen on stage with her. And Ellen certainly wasn’t the only host at this point in Ellen’s career to discuss her relationships — which could be part of her frustration.

Nor was Taylor the only uncomfortable interview Ellen experienced in her 19 years as the queen of daytime television. Most notably, perhaps, was when she attempted to call out Dakota Johnson for not inviting her to her 30th birthday only for Dakota to turn the tables and tell the host not only did she invite her, but it was Ellen who decided not to come.