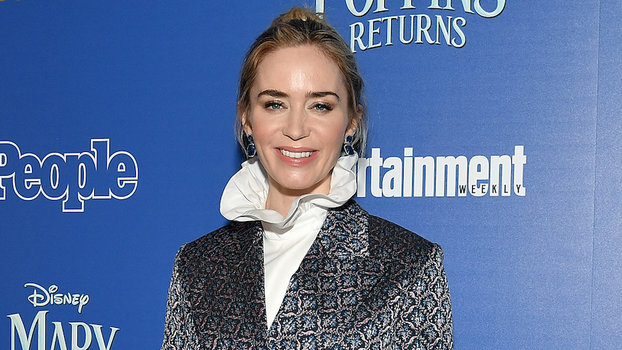 To put it mildly, Emily Blunt has been busy lately. In between couples photoshoots with John Krasinski and red carpets, the actress is also on a premiere tour for her movie Mary Poppins Returns — and she’s been wearing practically perfect fashion the whole time.

On Monday, she put a personal spin on Poppins’s style in New York City for both a screening and a pit stop at The Late Show with Stephen Colbert. Blunt wore what is probably the best holiday-worthy fashion we’ve seen all season (which is saying something) with a full forest green Michael Kors tartan and argyle outfit.

Her flared patterned pants (net-a-porter.com; $627) and cashmere pullover (michaelkors.com; $389) were peak Christmas, but she didn’t end the fashion tour there.

The actress then attended the next stop on her delightfully dreamy press tour at a New York City screening of Mary Poppins Returns, hosted by the Cinema Society, Fiji Water, and Lindt Chocolate, with an after party at The Top of the Standard. For the occasion, she swapped out Michael Kors for yet another patterned pair of pants, this time as part of an Erdem suit.

Blunt’s movie is as charming as her fashion choices, and she shared a theory about why the sequel is making everyone so emotional — including her husband John Krasinski, and dad, who she said “cried hard” when he watched it.

“I think sometimes childlike wonder and a sense of joy are sometimes seen as trivial things, and maybe people don’t revisit those parts of themselves very often,” Blunt told InStyle at the premiere. “I think this film is so nostalgic in spirit that I think it takes people by surprise. I really think it took my dad by surprise, just how upset he was watching it.”

Honestly that sounds like a perfect way to cap off a tumultuous 2018 — with sentimentality and maybe a few tears.