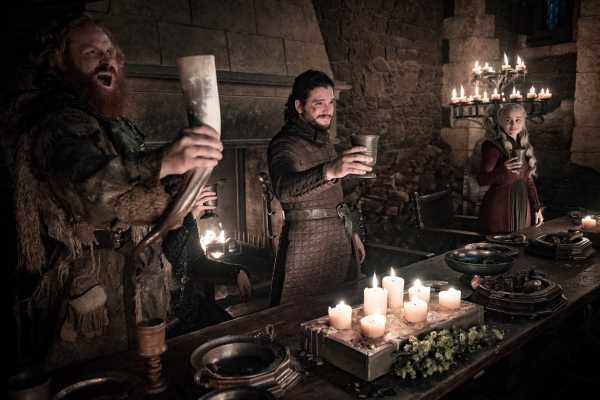 The Infamous Game of Thrones Coffee Cup Fiasco of 2019 is still going strong. If you thought it was over, you’re in for a surprise, because even though the cup in question has been removed from the scene in Season 8’s forth episode, Emilia Clarke has a nice little Game Of Thrones coffee cup update for you all, and it involves everyone’s favorite Khal, Jason Momoa (aka Drogo).

The coffee cup fans spotted in "The Last of the Starks" has already had many origin stories. First, it was credited to Sophie Turner, and now Emilia Clarke wants to throw her hat in the mix, with a new behind-the-scenes photo. "Did I just stumble upon the truth here?!" she wrote on Instagram Wednesday night, alongside a photo of herself, coffee cup in hand, sitting on Momoa’s lap next to Peter Dinklage, clearly on set. "The cup bearer does not drinketh the Starbucks tea," she wrote, seemingly claiming her innocence. The actor continued, clarifying that Momoa’s presence on set isn’t a spoiler for the rest of Season 8. "oh and this ain’t a spoiler just a lost wanderer coming home for a mid filming cuppa….? @prideofgypsies you so fire you make my hair turn blue," she said.

The cup appeared at around 17 minutes into the episode on the long table in Winterfell’s Great Hall during the post-battle feast. It was between Jon and Daenerys, and per a statement from HBO, "The latte that appeared in the episode was a mistake. Daenerys had ordered an herbal tea." So it’s hard to say if the cup actually was Clarke’s. But the world might never truly know. As it has since been removed, so whether you re-watch the episode on HBO Go or HBO Now, you won’t see it there anymore, which means, you won’t be able to study the scene for clues about the real culprit.

Even though the latte, tea, or whatever it was, isn’t a normal commodity on Game of Thrones, Momoa certainly is a staple that hasn’t fully left the show, despite his character dying in the first season. Drogo has shown up in visions since his untimely death, but Momoa has also just popped by set multiple times and seems to keep a close friendship with current cast members, especially with Clarke.

Last summer, while posing on a replica Iron Throne, Momoa hoisted Clarke mid-air in a pic she posted to Instagram. "FYI…This is the closest you’ll ever get to me attempting ‘that lift’ from dirty dancing," she wrote. "Yes, my man is sitting. Yes, there’s no lake. And yes, I have no idea I’m NOT being raised above his head. (Id like to take a moment to thank alcohol for giving me courage to attempt this. Ever.)."

Plus Momoa’s not quiet on how proud he is to have been on the show, nor is he shy about his support for Daenerys, Clarke’s iconic character. He and his wife Lisa Bonet agreed that Dany should be the one sitting on the Iron Throne when the series is done, with Bonet telling Entertainment Tonight at the Season 8 premiere, "Daenerys [deserves the Iron Throne]," to which Momoa responded, "My Khaleesi!"

So whether the Mother of Dragons did leave the tea cup on the table or not, her Khal will support her no matter what.