We're in the last stretch of 2019, which lends itself to looking ahead to possibilities and looking back at missteps in all aspects of our lives, including relationships and dating.

Did you know that 22 per cent of engaged couples used online dating websites or apps to meet each other? That's according to a recent poll from The Knot, the multiplatform wedding resource, and it's up 5 per cent from 2017. 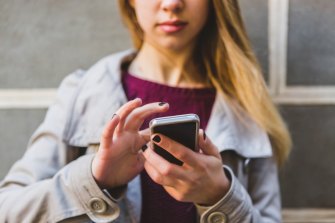 Will you come to your ex’s band’s show or contribute to her Kickstarter? That’s a cause-play.Credit:Stocksy

Now the dating app Plenty of Fish has come out with its annual dating trends survey, where we can glimpse what's to come in 2020. The app polled more than 1000 US-based Plenty of Fish users (ages 18-50) in November; of those who participated, 56 per cent identified as male and 44 per cent as female.

Here are some terms from the survey that daters should keep an eye out for in the new year. And here's hoping dating is easier and more fruitful this time around.

Don't get it twisted – this is not ghosting. Instead, dial-toning is the act of giving people your phone number and ignoring them when they reach out. Sixty per cent of singles have experienced this, while 35 per cent of singles admit to doing this to someone.

Getting dressed up for a date only to have the other person cancel at the last minute; 58 per cent of singles can relate to this.

Adopting the interests or hobbies of someone you're dating and pretending you like those activities; 48 per cent have dated someone who did this, while 45 per cent of singles admit to having done it.

When a casual relationship fizzles out, only to have one person later circle back to ask a favour: Will you come to his band's show or contribute to her Kickstarter? Sixty-one per cent of singles have had someone ask them for a favour post-breakup.

This is when people are called out on their poor dating behaviour; 27 per cent of singles have confronted a date this way.

Solely dating people based on Myers-Briggs type or "Love Language" compatibility; 27 per cent of singles know someone who talked about one or the other on a date.

When dates spend the entire time talking about themselves. Sound familiar? Forty-five per cent of singles think so.

The act of staying with people you find basic and boring because they're attractive; 27 per cent of singles admit to having done this.