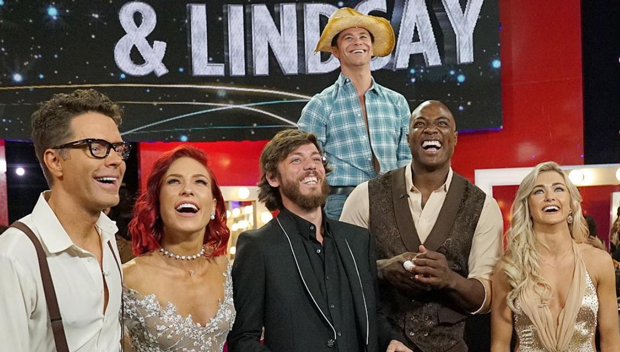 It’s Country night on ‘DWTS!’ Despite some amazing live performances, there was a heartbreaking double elimination that was extremely unexpected! Read our recap below!

John Schneider and Emma Slater kicked off the night with a Jazz to “Thank God I’m a Country Boy” by John Denver. “That’s the way to open the show. Full of fun, energy and I’m full of admiration,” Len Goodman said. Bruno Tonioli said the routine was custom made to make him shine. Carrie Ann Inaba said it was a joy to watch him. They got a 25 out fo 30, including a 9 from Len!

Evanna Lynch and Keo Motsepe did a sensual Rumba to “Every Little Thing,” during a live performance by Carly Pearce. “What a transformation. You have transformed into a sexy, sophisticated, irresistible woman,” Bruno said. “You have embodied the technique [of ballroom dance]…semi finals next week! Watch out!” Carrie Ann said. Len said her hands and every little detail was gorgeous. They got a perfect score of 30!

Juan Pablo Di Pace and Cheryl Burke did a fast-paced Charleston to “One Shot” by Hunter Hayes. “You make everything look so effortless and easy. Is there anything you can’t do?” Carrie Ann said. Len said it was great. “Better than FedEx, they always deliver,” Bruno said. They got a perfect 30!

Joe “Grocery Store Joe” Amabile and Jenna Johnson did a Tango to “Burning Man” by Dierks Bentley ft. Brothers Osbourne. “It was a little unstable,” Len said, adding he always dances with heart. “I really appreciate the way you don’t give up,” Carrie Ann said. The judges said he has captured the hearts of everyone. They got a 21.

Milo Manheim and Witney Carson did a gorgeous Foxtrot to “Born to Love You” — a live performance by LANCO. “proper, classic Foxtrot. You have talent, range and versatility,” Bruno said. “You’re the one to beat. You’re spectacular,” Carrie Ann said. Len said he dances with a lot of maturity. They got a 29!

Next, DeMarcus Ware and Lindsay Arnold did a Viennese Waltz to “Tennessee Whiskey” by Chris Stapleton. “You dance with full expression, there was love… it was so dynamic… stunning,” Carrie Ann said. Len said he likes a big guy dancing with softness and elegance. “Your charm is irresistible…nice flow,” Bruno said. They got a 27!

Alexis Ren and Alan Bersten did a Samba to “Ladies in the ’90s” — a live performance by Lauren Alaina. “For me, that was the best routine of the night. Fantastic,” Len said. “A match made in samba heaven,” Bruno said. “You were just ahead of the beat,” Carrie Ann critiqued. They got a 29 — but the best news? They are officially a couple — they kissed in their rehearsal package!

Bobby Bones and Sharna Burgess did a Viennese Waltz to “Can’t Help Falling in Love” — a live performance by Chris Janson. “Tonight, you really tried. You kept the flow, you delivered what we asked of you,” Bruno said. Carrie Ann said it was “tensed” and “strained.” Len said he needs to relax his shoulders, but it was his best dance. They got a 24 and he kissed Len and Bruno on the face!

#TeamHayNow danced to “9 to 5” by Dolly Parton. It was Bobby and Sharna, Evanna and Keo, John and Emma and Milo and Witney. It was great! “Loved the music, ;oved the performance, loved the choreography — I guess I loved it,” Len said. Bruno said it was a triumph and “brilliant.” Carrie Ann said, “you guys all nailed it.” They got a 29!

#TeamHayNow was up first and they CRUSHED IT! What did you think? #CountryNight #DWTS

#TeamJoeDown danced to “Country Girl” by Luke Bryan. The team was Alexis and Alan, DeMarcus and Lindsay, Joe and Jenna and Juan Pablo and Cheryl. “I need to hose down myself after that! Smoking!” Bruno said. “You guys were on fire. But you put Joe right in front of us so I noticed some mistakes,” Carrie Ann said. They got a 26!

Unfortunately, there was a double elimination. John and Emma and DeMarcus and Lindsay were sent home!