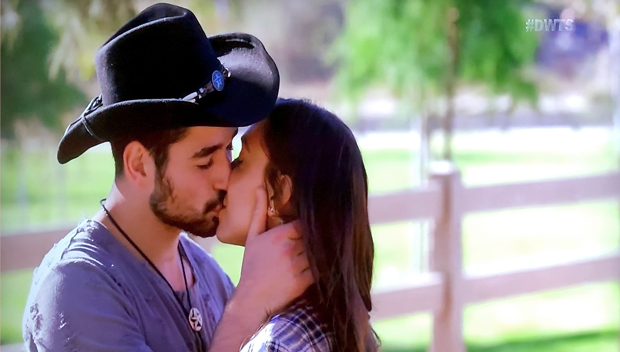 It’s official! Alexis Ren and her ‘DWTS’ pro partner Alan Bersten are acting on their feelings after admitting they were falling for each other. They had their first kiss and we’ve got the the video!

Love has blossomed this season on Dancing With The Stars between Sports Illustrated swimsuit model Alexis Ren and her pro partner Alan Bersten. The couple admitted on last week’s show that they’d developed feelings for each other and on the Nov. 5 episode the pair shared their first kiss! It was during the pre-taped segment ahead of their “Country Night” dance as the two had a romantic horseback ride together where they couldn’t contain their passion. “Last week, some things were said,” Alan told Alexis. “I’m in a place where, we worked so hard for this amazing journey together, and I’m afraid I will mess that up in some way.”

“But I’ve never had an experience like this,” the handsome 24-year-old continued. “It’s so easy to just hang out with you and have fun and not worry about everything else. I know that you put yourself out there last weekend, and I do have feelings for you. And I really feel like I am falling for you.” Of course that completely melted Alexis’ heart. In a confessional she revealed “After I opened up last week, I felt a little bit embarrassed. But now that we had this talk this week, I feel really good that everything’s out in the open.”

The pair gazed into each other’s eyes then Alexis did a cute adjustment of Alan’s black cowboy hat. Their chemistry was off the charts as they leaned in for their first kiss. After their package aired the show cut back to the pair before they began their dance. She covered her eyes as the audience squealed in delight, looking embarrassed that viewers got to see their first intimate moment.

During week six’s show, Alexis, 21, admitted “Alan, he’s awesome. He’s super outgoing. He’s definitely been a really good reflection for me to not take myself so seriously. It’s so much fun to dance with someone that you have a connection with. It’s almost like time We communicate not just through our steps and our movements, but with our hearts, too. I am developing feelings for Alan,” she confessed. “And I didn’t see this one coming. But it happened really quickly, though, so I think I’m still trying to process it.”